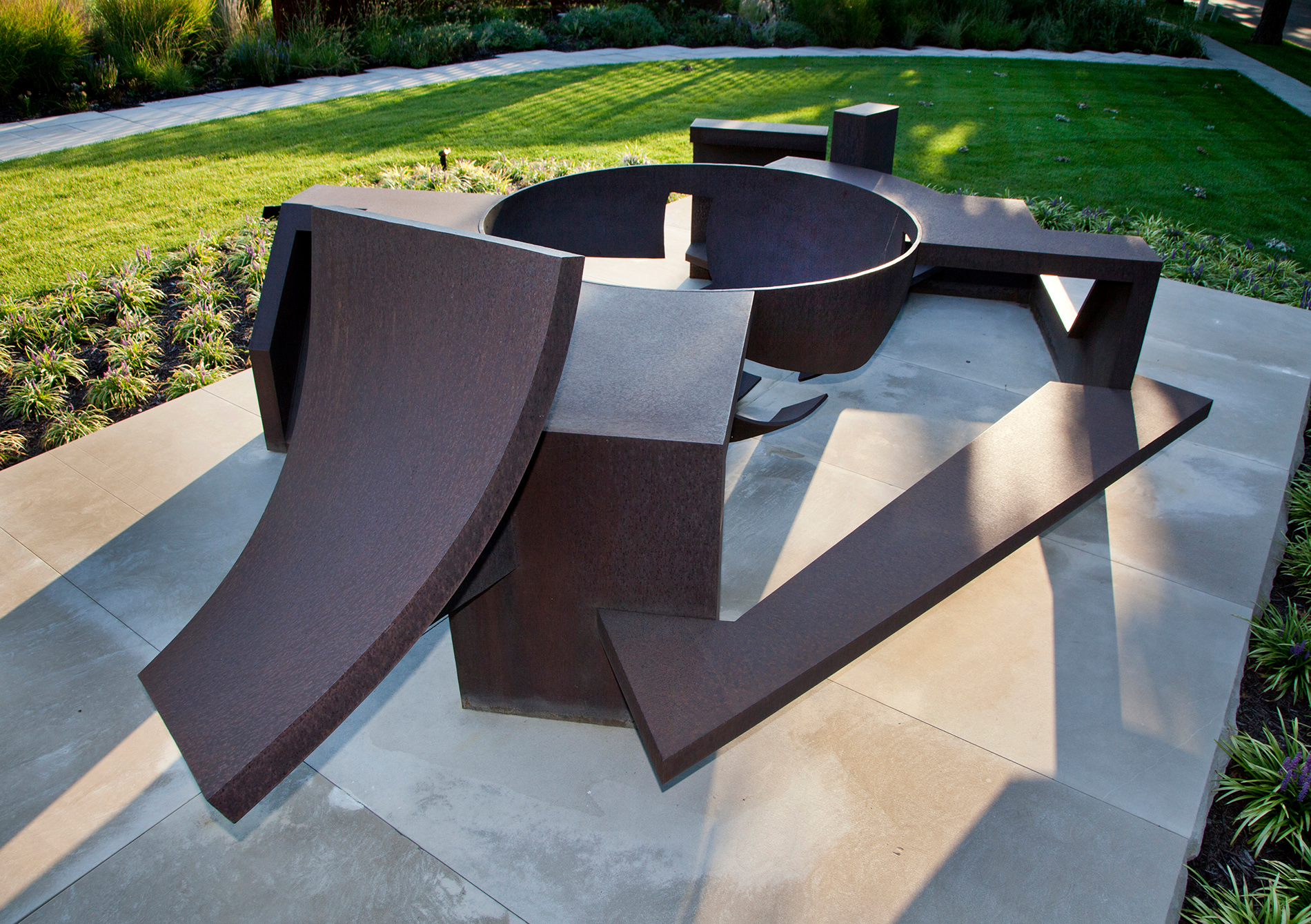 One of the most striking sculptures in the permanent collection of the Museum is this monumental brushed steel composition titled Yantra executed in 1977 by the American artist Isaac Witkin. The work is a rather massive piece, assuming appropriate scale in reference to the backdrop of the museum structure. Like the building, the sculpture hugs the ground echoing the angles of the building and at the same time punctuates the gently ris­ing terrain of the northeast side of the Museum campus. In addition, the rich warm tones of the brown steel blend quite harmoniously with the coloration of the ar­chitecture further linking the aesthetic character of the building with the sculpture and at the same time enhanc­ing the physical relationship between that architecture and the surrounding environment.

This work is constructed of six separate units firmly bolted together to form an approximate elliptical con­figuration nearly twenty feet across. Here Witkin has used heavy steel plate, and the various constituent forms introduced include flat broad surfaces, vertical, inclined, or horizontal, some rectangular and others trapezoidal. From one point on the periphery of the complex appears a 3″ thick protruding slab, gently twisted to create a hyperbolic-like surface. And in the center of the entire composition is an open hemispherical shape resembling a shell-like bowl. All these shapes are artfully assembled in such a manner as to invite visual explora­tion and discovery, involving a spatial interchange be­tween interior and exterior of the object and leading to a fuller understanding of the total constructional aspects of the work. What is especially relevant here is that these unrelated metal components, some perhaps ac­cidentally shaped, have been placed in the hands of an artist who has converted them from an essentially mean­ingless miscellany into an orderly system of relation­ships.

A significant dimension of this work derives from the fact that the composition is quite literally a highly per­sonal statement on the part of the artist himself and stimulates varied and perhaps conflicting interpretation by viewers. One compelling and provocative but often acknowledged aspect of the work is the sinister quality it evokes. Seemingly, this characteristic arises out of the skeletal structure and the silent stillness of the overall composition as well as from such particular features as the ruptured walls of the hemisphere where the seeming­ly impenetrable metal is virtually stripped open. The result is that in the mind’s eye the total composition associates with destruction framed as if within what might be thought of as a post-cataclysmic time-continuum. But yet another and perhaps equally fitting interpretation is that this work, unlike anything normal­ly encountered in our everyday existence, constitutes an entirely new and coherent language of artistic form as envisioned by the artist and one which, although we do not yet fully comprehend, nevertheless furnishes us a glimpse into a new configuration of world reality.

Isaac Witkin was born in Johannesburg, South Africa in 1936. He studied in England with Anthony Caro and for three years worked as an assistant to Henry Moore. His works are included in collections throughout much of the world and most especially in the Hirshhorn Museum, the Tate Gallery, and the Storm King Art Center in Mountainville, New York. He has exhibited extensively throughout England and America and in 1984 served as visiting artist in the Skowhegan School, Maine. As early as 1965, Witkin was co-winner of First Prize at The Paris Biennale.