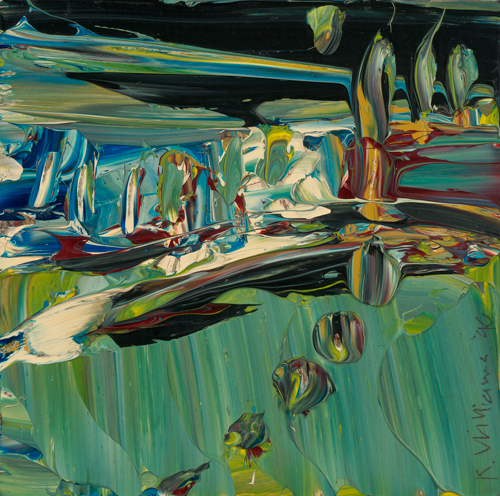 George Vollmer purchased this work from a causal exhibition at the original Larkspur Restaurant (in Wichita,) shortly after its opening. Eric Schmidt and I had a studio, down the street above Planet Hair. Downtown had one restaurant, the Pasta Mill and we were thrilled to have Larkspur and it’s bar downtown. Trish Higgins was quite probably involved in the showing.

This piece is part of a larger series of thickly painted works on board, all approximately 12” x 12” on approximately 3” deep box subframe. These thick painted works were typically done with a palette knife and acrylic paint, although oil base pigment and tar were occasionally, minimally used.

Of the “thick works family,” two primary series were created:

Five self-portraits, “Thick Self Series” and

This piece has a strong landscape, and fluid feel similar to some works in the “Story of Fire” series. I recall appreciating the piece as a stand-alone work, very much within the language of the thick work family. It stands well alone as a gestural landscape, and perhaps this was a precursor to my no eventual obsession with underwater “landscape” environments.