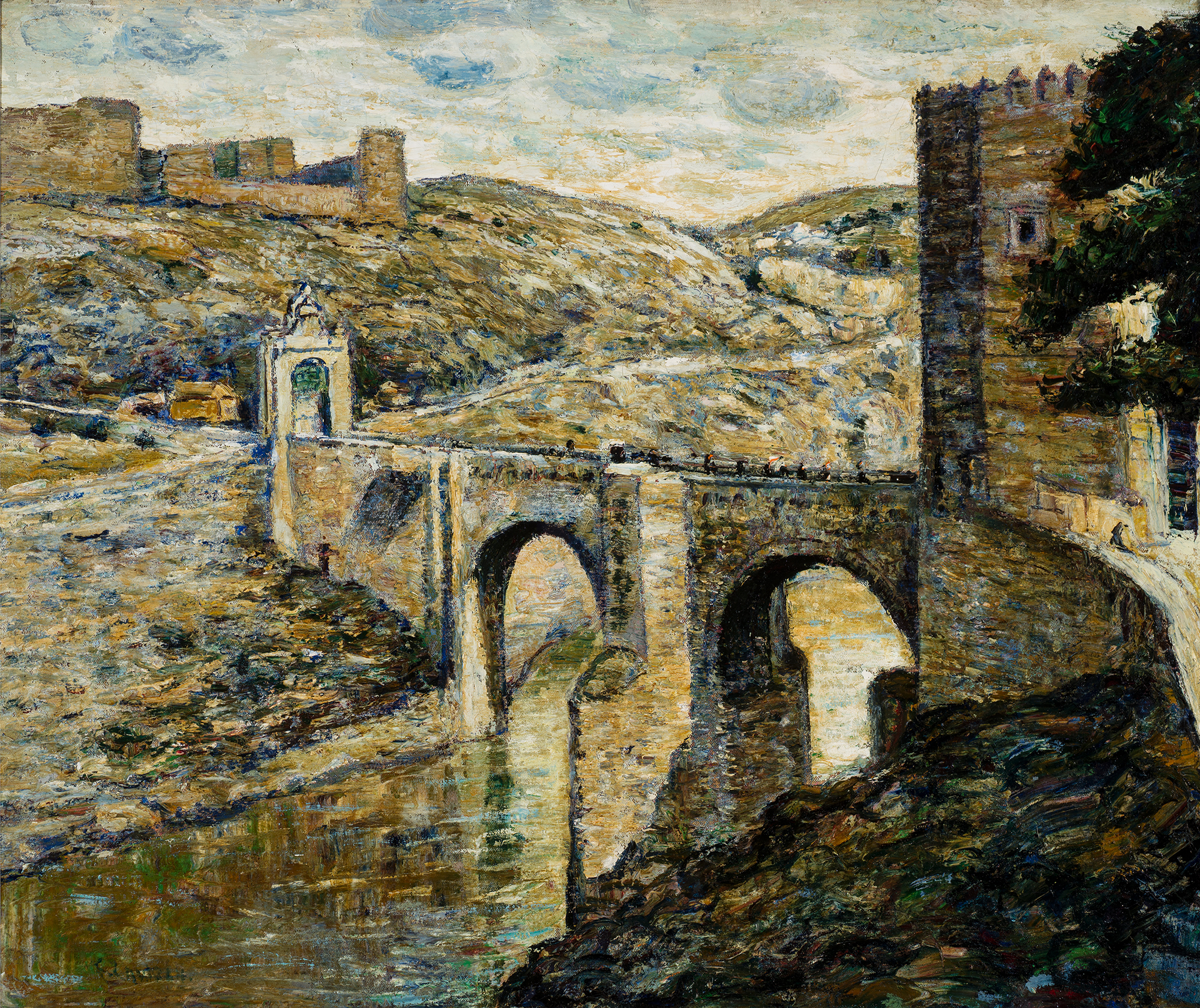 Lawson was the only member of The Eight to paint pure landscapes. In 1916 Lawson and his family vacationed in Spain. His daughter has added significant information to that brief episode in his career: ” ‘We met the Kuehnes and Father and Max fixed up a studio in the basement, just off the garden terrace, where they spent hours grinding pigments and making their own materials …. Father did a good many paintings in and around Segovia and Toledo and we made frequent trips by donkey into the nearby countryside.’ “1

Toledo Bridge displays Lawson’s personal view of Impressionism with a harmoniously rich surface and a value range unlike that of any other follower of that tradition. The vibrant surfaces of Lawson’s canvases once prompted a critic to question if the artist’s palette was made of ‘crushed jewels.’ Lawson’s technique has been well analyzed by the Berry-Hills: “His layer upon layer of glistening oil paint does not disguise any precise compositional devices; he painted landscape for landscape’s sake, as though every canvas was a spontaneous study of color-in-landscape and texture-in-landscape. His color, molded into a rich mass on his palette, is vivid, applied with knife, brush, and even thumb. It was as though he was virtually sculpting his paint with color on color, over and over again. His method of scraping and manipulating his paint is personal, adapted to accord with his theme. Some summer surfaces actually sing with color and glow with luminous iridescence, comparable with that of brilliant enamel.

A story is told that a sculptor, enamored with the solidity of Lawson’s paintings remarked humorously: ‘If you don’t mind, I should like to come around one day and make myself a cast of it.’ “2 The last comment recalls that Lawson, like Cйzanne who obviously influenced him, consciously attempted to recapture the solidity lost in Impressionism. The painting is illustrated (no. 52) in the Berry-Hill’s text under the title The Alcantra, Toledo. The receipted voucher of June 3, 1942, from the Milch Galleries gives the title as Toledo Bridge.

Ernest Lawson was born in Halifax, Nova Scotia. After living in Kansas City and Mexico City, Lawson came to New York in 1891, where he studied at the Art Students League, later continuing his studies at Cos Cob, Connecticut, with John Twachtman and J. Alden Weir. Although he traveled to a considerable extent in this country and in France, most of his work was produced in New York City around the Harlem River and in upper Manhattan.