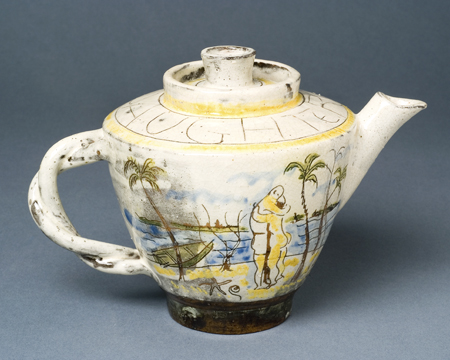 Henry Varnum Poor was one of the most versatile American artists of the twentieth century. His success as a painter was matched by his achievements in mural painting, studio ceramics, architectural ceramics, furniture construction, and architectural design and construction. His breadth of technical mastery and his integration of life and art made him an ideal disciple of the master of the Arts and Crafts, William Morris (British, 1834–1896). The tea set Poor made for his family beautifully unties every-day utility, craftsmanship, and art. The artistic element lies in the decoration of each piece with unique depictions of meaningful events in the history of the family.

Mr. Poor married his third wife, Bessie Friedman Breuer, in 1925. Their only child together, Peter, was born the following year. One of the most charming of the 11 plates in the service depicts the new-born Peter kicking and turning. His raised left leg seems a willful attempt to lift himself from his two-dimensional captivity in the plate.  The inscription around him reinforces the infant’s rise from the earth[enware]: “EARTH I AM IT IS MOST TRUE—DISDAIN ME NOT, FOR SO ARE YOU.” The statement affirms our connectedness with nature.  Peter is shown on another plate being held by Bessie, his mother.

Bessie had a daughter Annie, by a previous marriage, whom Henry later adopted. Annie, singing while playing the piano, is featured on one of the plates. Bessie was a journalist and novelist. Her novel In Memory Only of 1935 was made into a movie starring Carey Grant and Carol Lombard. One of the two tea pots commemorate the novel, the title of which is inscribed on the lid. The other tea pot, which shows a man and woman embracing at the Marco Lodge on San Marco Island, Florida, refers to Bessie’s second novel, The Daughter. Other pieces of the set refer to the year the family spent in France (such as the plate depicting their apartment building on the Rue Raspail, Paris) and their life at Crow House, their country place in New City, New York, build by Poor himself in 1920.

Though made and decorated in 1940, the set’s technique differs little from that of his first experiments in ceramics of 1920. He obtained the red clay from a nearby site along the Hudson River. He threw the clay on a homemade kick wheel and painted the decoration over a coat of slip. The final tin glazes were made to his own formulas, based on materials collected from the surrounding grounds.

In 1922 Poor began selling his ceramics to the Montrose Gallery, New York.  They were an immediate and ongoing financial and critical success. The sale of utilitarian ceramics of simple but sophisticated decoration by a prominent art dealer is a landmark in the history of the studio ceramics movement. By 1955, when Elizabeth Navas purchased three of Poor’s pots for the Roland P. Murdock Collection, he was being represented by Frank K. M. Rehn.  Poor never lost his love of the physical and artistic process of making ceramics. On the evening before Henry Varnum Poor died, at the age of 83, he had filled his kiln with objects ready to be fired. Of earth they had come; and to earth all will return.