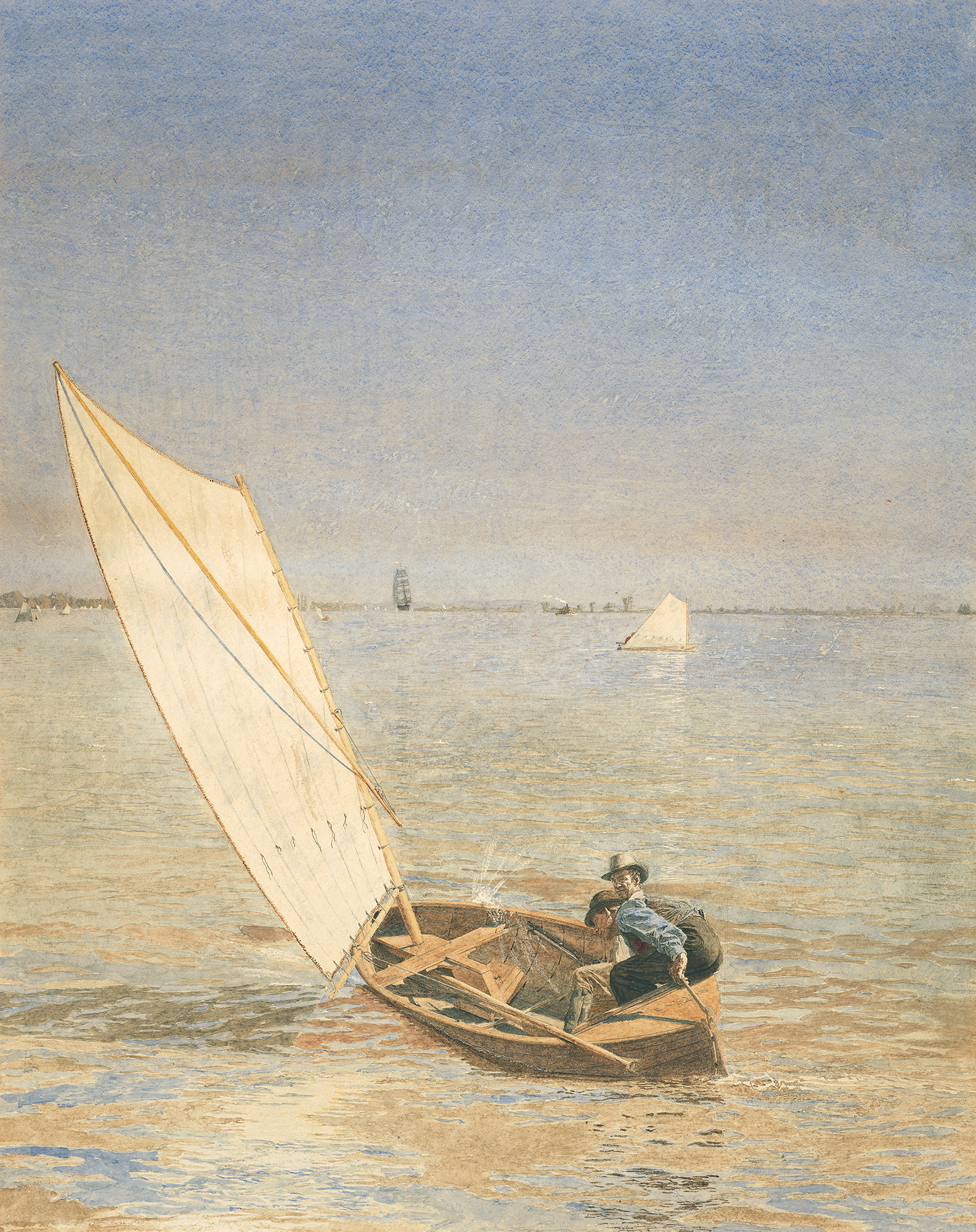 Starting Out After Rail

Meticulous perspective and precise reflections characterize Thomas Eakins’s depiction of sails and sea in his painting Starting Out After Rail. Eakins approached painting with the eye of a scientist and discovered his personal aesthetic in clinical objectivity. He stated:

“There is so much beauty in reflections that it is generally worth while to try and get them right. Everyone must have noticed on the sides of boats and wharves or rocks, when the sun is shining and the water in motion, never-ending processions of bright points and lines These points and lines are the reflections of the sun from the concave parts of the waves acting towards the sun as con cave mirrors, focusing his rays now here, now there, according to the shifting concavities.1”

Eakins was born in Philadelphia in 1844. His scientific interest manifested itself early on, and became a major factor in his artistic training when he enrolled in anatomy classes at Jefferson Medical College in order to augment his concurrent studies at the Pennsylvania Academy of the Fine Arts. He went to Paris in 1866 and studied with the painters Jean-Lйon Gйrфme and Lйon Bonnat, and the sculptor Augustin-Alexandre Dumont. Of Eakins’s teachers, Gйrфme was most influential, emphasizing the importance of precise draftsmanship, and reinforcing his student’s interests in perspective and scientific exactitude. Eakins returned to Philadelphia in 1870, making the city his permanent home. In Philadelphia, Eakins became an important teacher in his own right at the Pennsylvania Academy of the Fine Arts.

Starting Out After Rail depicts two men set ting out across the Delaware River to the New Jersey marshes in order to hunt the aquatic game bird. Eakins knew the two men in the painting and identified the picture as Harry Young, of Moyamensing, and Sam Helhower, “The Pusher,” Going Rail Shooting.2 Eakins was himself a rail hunter, and it seems fitting that the artist traded the picture with James C. Wignall, a Philadelphia boat builder, who accepted it as payment for a boat. Because Eakins was well acquainted with the sport of rail hunting, and strived toward exacting artistic realism, every detail is precisely rendered. Eakins depicts everything from the stitching on the sail to the double-barreled shotgun held fast on the inside of the boat with an amazing technical facility and literalness difficult to achieve with watercolor. Even the artist’s signature on the spray cover at the stern of the boat is rendered in perfect perspective.

Eakins painted two other versions of this composition, both in oil. One painting (Museum of Fine Arts, Boston) bears the same title, and is nearly identical to the watercolor. The other, simply titled Sailing (Philadelphia Museum of Art), depicts the same scene but is more generalized, and eliminates details such as the push pole, shotgun, and rigging. Starting Out After Rail is also related to several other of Eakins’s aquatic sporting pictures of the same period, notably his Schuylkill River sculling subjects.