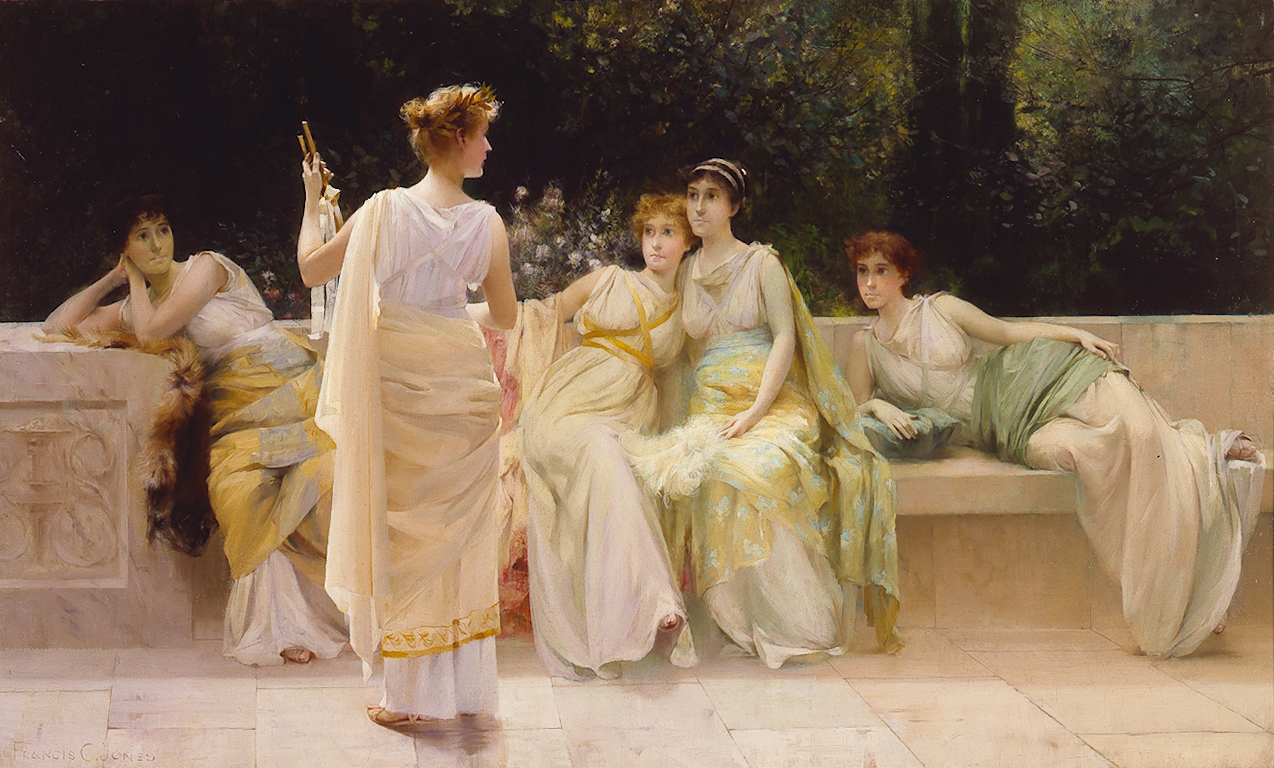 Soon after 1900, such avant-garde movements as American impressionism and ash-can realism were join­ing the mainstream of American painting. At the same time more conservative attitudes, rooted in the drastic social and economic changes that marked the decades following the Civil War, energetically sought to pro­mote an image of America which could measure up to the level of refined taste typified by Old World stan­dards. Both for subject themes and for styles, the con­servative wing turned readily to ancient classical and Renaissance prototypes. With the first World War, however, that movement fell out of fashion. Only recently has it gained renewed attention by historians and critics of art who now see the period as an American Renaissance.

This handsome oil titled The Song executed by Fran­cis Coates Jones no doubt soon after 1900 is a fine ex­ample of American Renaissance painting. Here, a beautiful young woman stands and holds a lyre in her left arm while singing or reciting before four young women who, seated on a marble bench, appear spell­bound as they listen. All of the figures are garbed in classically inspired diaphanous chitons, which fall gracefully in loose rhythmic folds. The setting is calmly serene, and the scene brings to mind popular tales of Sappho, the ancient Greek poetess who is said to have devoted her life to instructing young women in poetry and music.

Technically, the work is handled with enviably meticulous refinement. Colors are vivid and throughout the composition textures are convincingly rendered, as for example the stone bench and marble tile floor, the feather fans and the quality of soft human flesh. A nearly opaque luxuriant green backdrop furnishes a flat decorative pattern against which the carefully modeled figures stand out in sharp silhouette. Yet, faint glim­mers of light seep through the densely tangled green at the right, dispersing a delicate greenish tint across adja­cent areas of the composition.

Of especial interest is the sense of classical design itself. For all of the figures are inscribed within a balanced triangular format with the head of the stand­ing figure coinciding with the apex of the triangle. One side of that triangle is formed by the sloping line of the three figures on the right while the other side, extending well beyond the limits of the composition, is defined directionally by the right arm of the leaning figure at the extreme left. This geometric organization recalls the familiar arrangement of triangular pedimental sculptures found in ancient classical buildings. And in­deed the three relaxed figures on the right — two leaning against each other and the third reclining — are compositionally reminiscent of a particular group of ancient marbles, the so-called “Three Fates” from the east pediment of the Parthenon, with which Jones was most certainly acquainted.

Francis Coates Jones was born in Baltimore, Maryland, in 1857 and was the brother of Hugh Bolton Jones, another well-known painter of the period. In 1876 he went to Paris to study at The Ecole des Beaux Arts for four years. In 1882 he settled in New York City. In 1885, Jones won the coveted Clark Medal at the Na­tional Academy of Design and became an associate of the National Academy. In 1894 he was elected full academician. Jones was the recipient of numerous art awards and served actively as a member of the Board of Directors of the American Academy at Rome and of the Metropolitan Museum of Art in New York and for more than 20 years was a trustee of the National Academy of Design, serving as Treasurer. He main­tained his residence and studio in New York until his death at the age of 74 years in 1932.