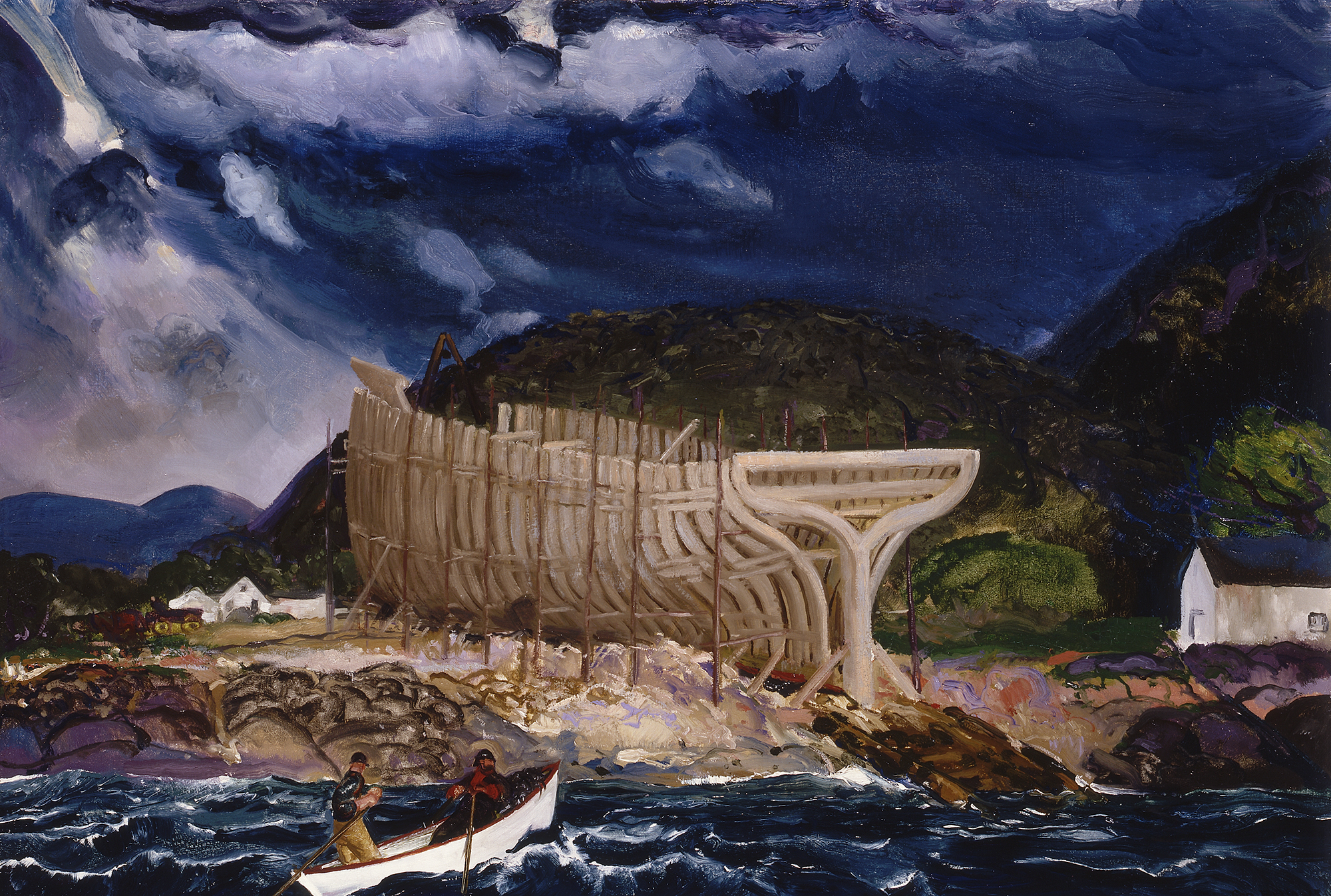 As one of a series of paintings depicting shipbuilding at Camden, Maine, The Skeleton focuses on the wooden structure of freight ship under construction. While Bellows was keenly interested in the reality of the subject at hand, he acknowledged in a letter to his mentor, Robert Henri, his reliance on imagination and memory in executing this and other paintings at Camden:

I have done a number of pictures this summer which have not arrived in my mind from direct impressions but are creations of fancy arising out of my knowledge and experience of the facts employed. The result, while in continual danger of becoming either illustration in a bad sense or melodrama has nevertheless evolved into very rare pictures. 1

Born in Columbus, Ohio, Bellows spent most of his early life in his native state and attended Ohio State University before leaving in his junior year. A star athlete in college, Bellows had the potential to pursue a professional baseball career, but instead chose to become an artist, moving to New York, where he studied under Robert Henri at the New York School of Art. Bellows adopted the urban realist style practiced by Henri and Henri’s students John Sloan and George Luks. Critics dubbed these painters the Ashcan School because of their artistic interest in the slums, saloons, and sordid details of everyday city life. The energetic brushwork of The Skeleton conveys the emotional vigor that Bellows and the other Ashcan School artists brought to their work.

In 1917, Bellows expressed admiration for the shipbuilder and his craft: “He is creating some thing splendid, to master wind and wave, some thing as fine and powerful as Natures own forces. When I paint the colossal frame of the skeleton of his ship I want to put his wonder and power into my canvas, and I love to do it.”2 Unlike the other Camden works, which focus on the activity of shipbuilding itself, The Skeleton provides a distant view of the ship and surrounding landscape. The prominent, central placement of the ship within the land’s natural formations echoes Bellows’ metaphorical identification of the work of the shipbuilder with the creative forces of nature. The manned rowboat in the foreground and houses in the background emphasize that the hull is a product of human craft and ingenuity as well as a source of economic vitality.

The ship under construction in The Skeleton was commissioned by the United States government and was intended for the war effort. While the painting offers an optimistic depiction of society’s creative endeavors, it may also allude to the destructive impulses of humankind. In 1916, the U.S. involvement in World War I was mainly limited to trade with the European powers. Repeated destruction of U.S. merchant ships by German U-boats, however, led to American entry into the hostilities in 1917. The dramatic, almost foreboding atmosphere of Bellows’ landscape, with its ominous sky, may refer to the ship’s intended use. Even though Bellows opposed the war, he commented that he “would enlist in any army to make the world more beautiful. I would go to war for an ideal—far more easily than I could for a country. Democracy is an idea to me, is the Big Idea.”3 With an eye toward the war in Europe, George Bellows’ The Skeleton presents a powerful depiction of the artist’s democratic ideals filtered through the craft and skill of the shipbuilding community.