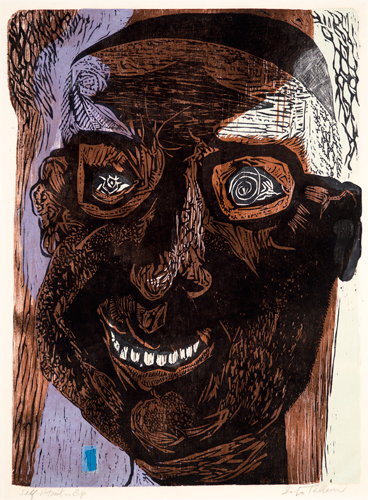 John Talleur received degrees from the University of Chicago, the Chicago Art Institute and the University of Iowa. He was awarded a Fulbright Fellowship to pursue advanced studies at the Ecole des Beaux Arts in Paris. He was professor of art and honorary curator of prints at the Spencer Museum of Art, University of Kansas.

Talleur preferred to use the medium of the relief print, particularly the woodcut, which is the most ancient and direct method of printmaking. The artist has always liked working on a large scale and with several colors. This format corresponds to that of the lithograph and serigraph images produced by avant-garde printmakers of the 1960s–1980s.

Talleur’s earlier imagery is figurative and expressionistic. In later years he focused on simple geometric shapes. However, elements of expressionism remain in the hand-drawn, hand-wiped look of the geometric figures.