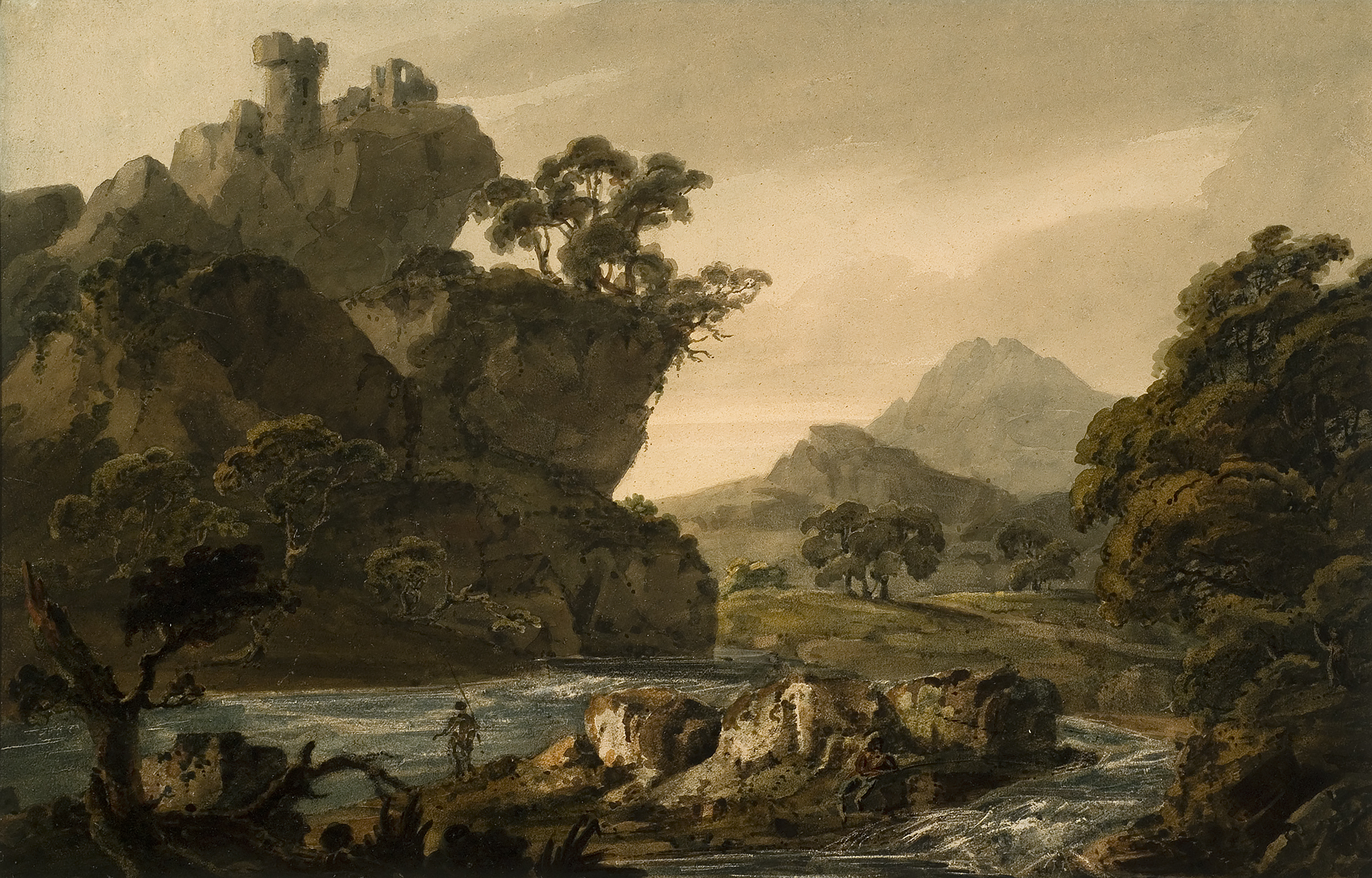 This elegant watercolor painting titled Romantic Landscape was executed in 1798 by the eminent British watercolorist Thomas Girtin. Here a large cluster of trees at the extreme right and a high bluff topped by castle ruins at the left frame the composition and at the same time open a wide area which channels the eye into the deep space where in the distance steep and rugged hills and mountains can be seen. In the foreground a massive rock juts up in the middle of a rushing stream, and nearby a tiny figure of an angler is shown, almost lost in the vast but peaceful setting.

In this work Girtin has effectively caught the essential components of 18th century aesthetic theory. The precipitously overhanging cliff on which the castle is precariously perched and the wide expanse of infinite space were regarded as expressions of the “sublime,” while the overall irregularity of the landscape itself, the abrupt variations in shapes, the knotted tree trunks and the presence of architectural ruins that add a nostalgic sense of the inevitable passage of time were together considered appropriate suggestions of the so-called “picturesque.”

These aspects, so common in British landscape paint­ings at the end of the 18th century, exerted an enormous influence on American landscape painting early in the 19th century. What is most particularly significant however is the fact that this work by Girtin exemplifies a technical and stylistic revolution in watercolor painting, for during the 18th century, most British watercolors were essentially merely tinted drawings. In contrast Girtin’s work is executed in pure watercolor, freely handled, and applied directly to the paper rather than used simply to color outlined shapes. Moreover, Girtin has master­fully created atmospheric effects and at the same time his forms are suggested rather than painted in precise detail, with the result that the forms themselves seem loose and woolly yet are actually far more convincing in naturalistic appearance than those of any tinted draw­ings.

Indeed, this work demonstrates Girtin’s tremendous precocity and accounts for the enviable reputation which he enjoyed during his productive if extremely short life. He was born in Southwark, then a suburb of London, in 1775. He was apprenticed to several promi­nent British artists of the time and later attended eve­ning drawing classes at the residence of Dr. Thomas Monro who, although a physician, was instrumental in assisting numerous young artists.

It was in Dr. Monro’s classes that Girtin first met J.M.W. Turner. The two young artists were exactly the same age and became close friends, often traveling together throughout England on sketching tours. By 1794, when he was only 19 years old, Girtin exhibited at the Royal Academy. In 1800 he was married but his poor health tragically culminated in his death in London in 1802 when he was only 27 years of age. For a young man, Girtin was highly prolific. Yet today, by virtue of his short life span, his watercolors are extremely rare.