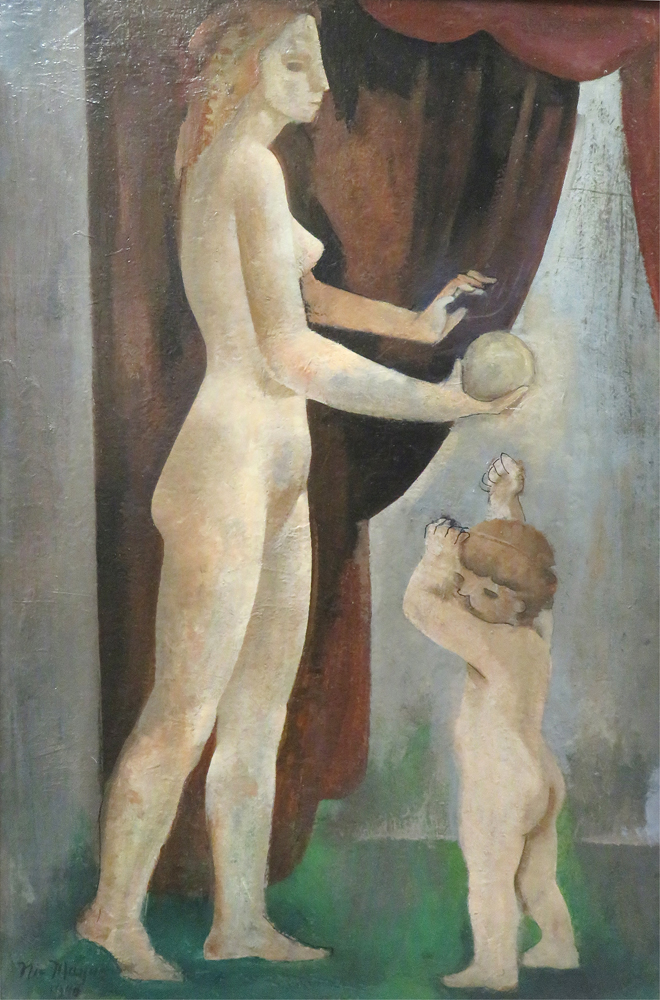 Ancient peoples instinctively possessed profound understandings of human personality and couched their explanations in what to us today may seem to be childishly naive fables. One of the most persistently charming is the tale of Psyche and Cupid, the theme of this 1940 painting by the Nebraska-born artist Nic Mayne. The story tells of a young maiden named Psyche or soul whose beauty incurred the jealousy of Venus, Goddess of Love. Venus dispatched her son Cupid with instructions to shame Psyche by making her fall in love with a monster. Instead Psyche and Cupid fell in love with one another. But Cupid warned Psyche that she must never see him in the light. Nevertheless, one-night Psyche’s overwhelming curiosity led her to steal upon Cupid while he slept, and holding a small globular oil lamp over him, she accidentally spilled a tiny drop of oil on his face. The hot oil promptly awakened him, and he leaped from his bed. It is this moment that is depicted in this painting. The story goes on to tell how Cupid, angered by Psyche’s broken promise, fled and how the remorseful Psyche searched the earth for her lover throughout her life. Only many years later was she reunited with him in heaven. The deeper meaning therefore symbolizes the tormented soul’s eternal search for human love.

But Mayne’s fascination with ancient thought went beyond mere interest in a classical theme. For here he has used soft color tones — blue-gray, ivory, green and brown — quite similar to those found on archeological remains from ancient painting. Moreover, his treatment of the standing profile figure of Psyche, with her large almond shaped eye, long tresses, delicate ivory flesh tones and sharp linear outline, is strongly reminiscent of Minoan fresco painting which during the 1920s and 1930s was beginning to be widely publicized in popular literature throughout the world. Also important here is the formal balance of strong geometric shapes by which the moment depicted is so effectively expressed, for Psyche is silhouetted against the dark background drapery while a contrastingly bright funnel-shaped shaft of light dominates the right, illuminating the figure of Cupid who draws his left arm across his face, avoiding the light and obscuring his identity.

Although Mayne was widely recognized during his career, little is known today of his life. He was born in Nebraska about 1899 and settled in New York in 1923 where he studied at art schools as well as under the direct instruction of George Luks with whom he shared a studio. In the years immediately prior to his death, Mayne was apparently a recluse and in 1947 was found dead in his studio loft.