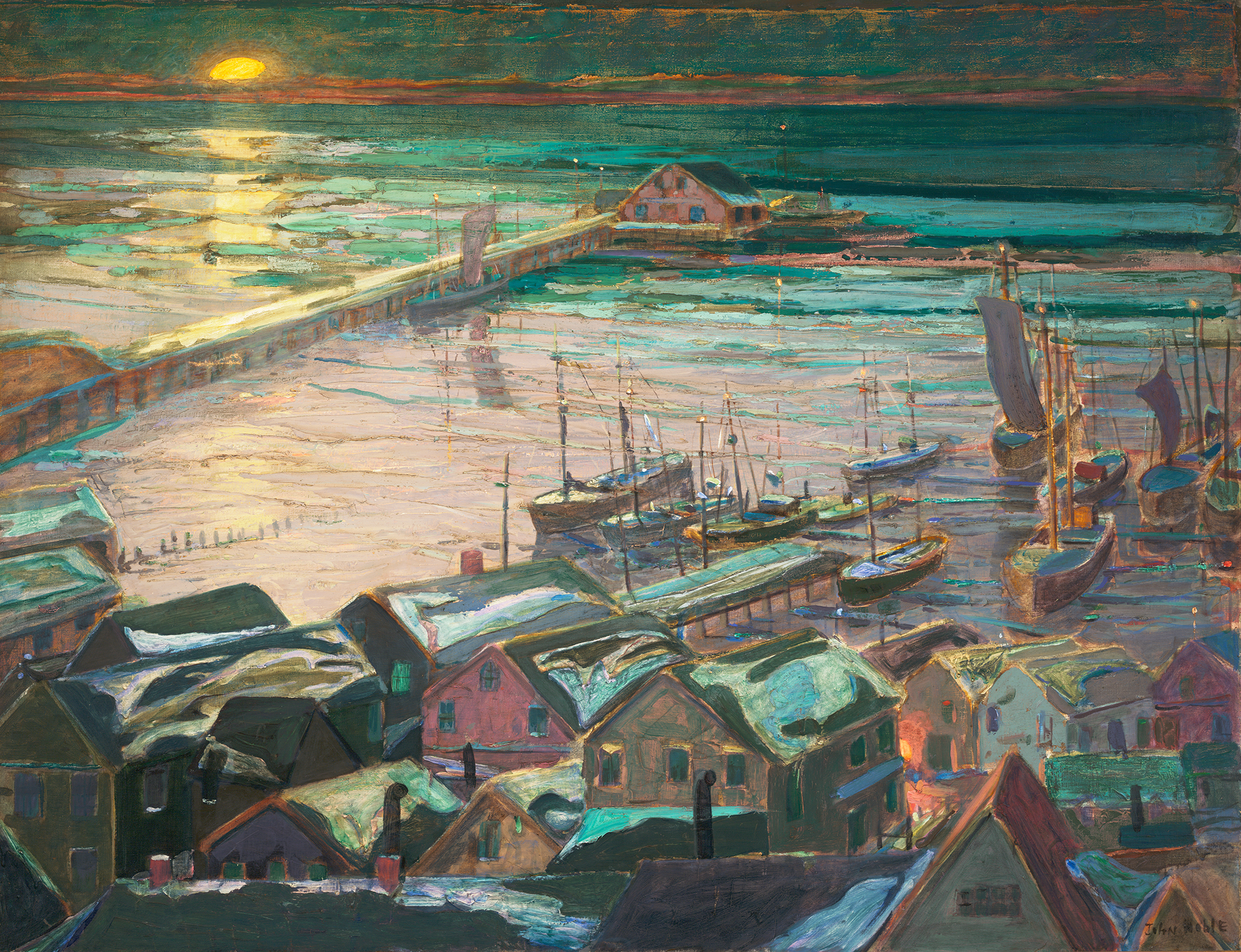 John Noble was born in Wichita, Kansas, the son of prosperous first-generation settlers from England. He studied art in Cincinnati from 1893-95 while supporting himself as a commercial photographer. Like many American artists around the turn of the century, Noble made the pilgrimage to Europe for training, studying under Jean-Paul Laurens at the Academie Julian in Paris. After experiencing artistic success in France and England, Noble returned to the United States in 1919 with his French wife, Amelia, and settled in Provincetown, Massachusetts. The site of a lively summer artists’ colony, Provincetown provided a vital, bohemian atmosphere for the repatriated Noble. Most painters spent the daylight hours working from nature, and enjoyed evening com­panionship with the other artists, writers, actors, and playwrights who gathered in the town. Noble cut a colorful figure in Provincetown, playing off his frontier origins to style himself as a swaggering cowboy. In 1920 Noble founded and served as the first director of the Provincetown Art Association. He led the funding campaign for the renovation of a house into an art museum to host annual sum­mer exhibitions by the association’s members. The Nobles lived year-round at Provincetown until the autumn of 1922, when they moved to New York.

Although many Provincetown artists painted harbor scenes, this example is unusual in depicting the port in winter, a season during which most artists abandoned the area due to its harsh climate. The vibrant colors and bravura strokes of Noble s seascape capture the vivacity and difficulty of life along the northeastern coast. The variety of tex­tures adds visual interest to the painting’s surface, from thin areas of paint to thick impasto applied with a palette knife. According to Noble’s own notes, the harbor was painted from “pilgrim monument,” a stone tower that was the geographic high point of the area.1 This unique vantage point allowed an elevated, expansive view. The paintings composition is built of progressive spatial layers, from the crowded fishing village, to the sailboats and pier, to the expanse of open water and sky. Cool shades of blue and green dominate the scene, with deep purple representing shadows. It is dawn, and most of the windows are still dark. The fluo­rescent orange glow of a lantern is the first indica­tion of life and warmth in the village, as fishermen rise to begin their difficult labor. They are awak­ened by a brilliant yellow sun, which contrasts with the chilled ocean atmosphere. Provincetown Winter won the W.A. Clarke prize at the Corcoran Gallery in Washington in 1923. The following year, Noble was elected to the National Academy of Design.

This seascape is full of color and romantic nostalgia, echoing Nobles own comparison between the land of his native Kansas and the sea he loved so well: “There’s not much difference between the prairie and the ocean—that is, the prairie I used to know. I began to feel that the vastness, the bulk, the overwhelming power of the prairie is the same in its immensity as the sea— only the sea is changeless, and the plains, as I knew, were passing.”2

1. Note in Noble’s handwriting in registrar’s files, Wichita Art Museum. I am grateful to Dwight Burnham, Professor Emeritus, University of Kansas, for verifying the location of this site in Provincetown.

2. John Noble quoted in Madeleine Aaron, “The Prairie and the Sea,” I Cover the Bookfront December 1943).