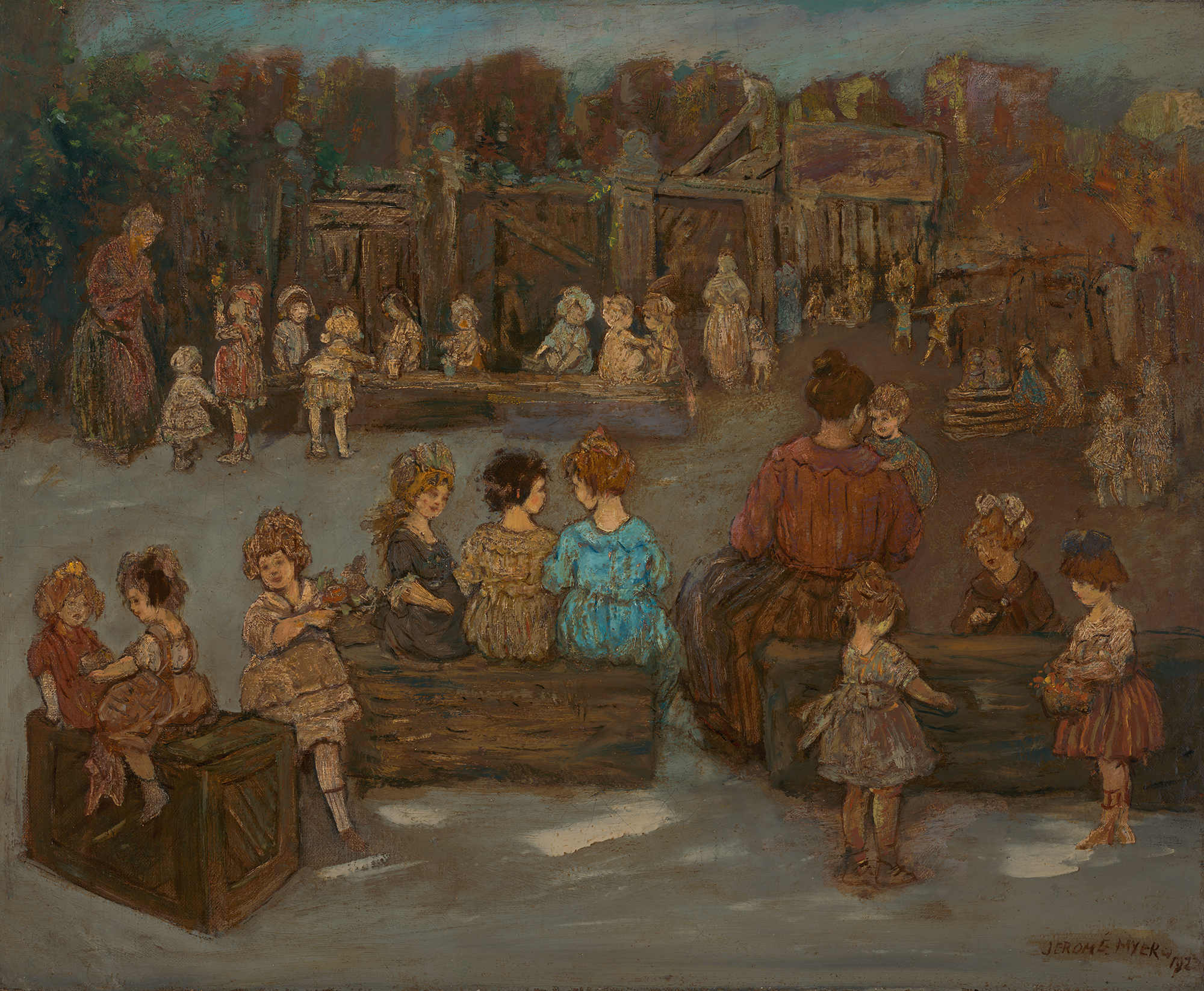 Jerome Myers was one of the most active artists in America during the early 20th century. Stylistically, the serenity and poetic sensitivity of his paintings echoed his own gentle personality, and certainly these qualities are fully realized in this delightful work titled The Playground which Myers executed in 1925. As the title indicates, the setting here is a spacious playground enclosed within a heavy wooden fence and crowded with gaily dressed young children. Perhaps what most delights the viewer are the candid poses and dainty gestures, the happy expressions and the harmonious in­teraction of the children at play, some quietly seated on benches or wooden crates, some frolicking about, others absorbed in conversation. Moreover, the forms of the many children scattered across the surface of the canvas produce a spirited effect much heightened by the loose and vigorous brushwork within clearly delineated contours, a quality that so typically characterized the artist’s style.

One of the most striking features of this work is the effective use of a rather somber tonal background as a foil, enabling the many daubs of soft colors to scin­tillate, and thereby enlivening the composition and im­parting an overall accented surface pattern reminiscent of that of an embroidered Gothic tapestry. But above all else the most compelling aspect of this work is Myers’ ability to communicate so vividly his own tender affec­tion for the gentle simplicity and joyous innocence of children.

Both in theme and in style, Jerome Myers worked much in the manner of the ash can painters who were his contemporaries and his friends. Yet he obviously was influenced also by the American Impressionist move­ment of the late 19th and 20th centuries. At the same time, the dark tones commonly found in his works clearly reflect the 19th century Munich school technique which was popular in America at the turn of the cen­tury.

Myers was born in Petersburg, Virginia in 1867. As a young boy he moved first to Baltimore and then to New York City where he studied at the Cooper Union and the Art Students League. Myers traveled widely in Europe but throughout his career insisted that he could find the most meaningful and most satisfying subject matter among the immigrant people — and especially the children — of New York’s lower East Side. He was an associate member of the National Academy and par­ticipated in the well-known Armory Show in 1913, and throughout much of his career was closely associated with Robert Henri. Shortly before his death in 1940, he completed his highly informative autobiography titled Artist in Manhattan.