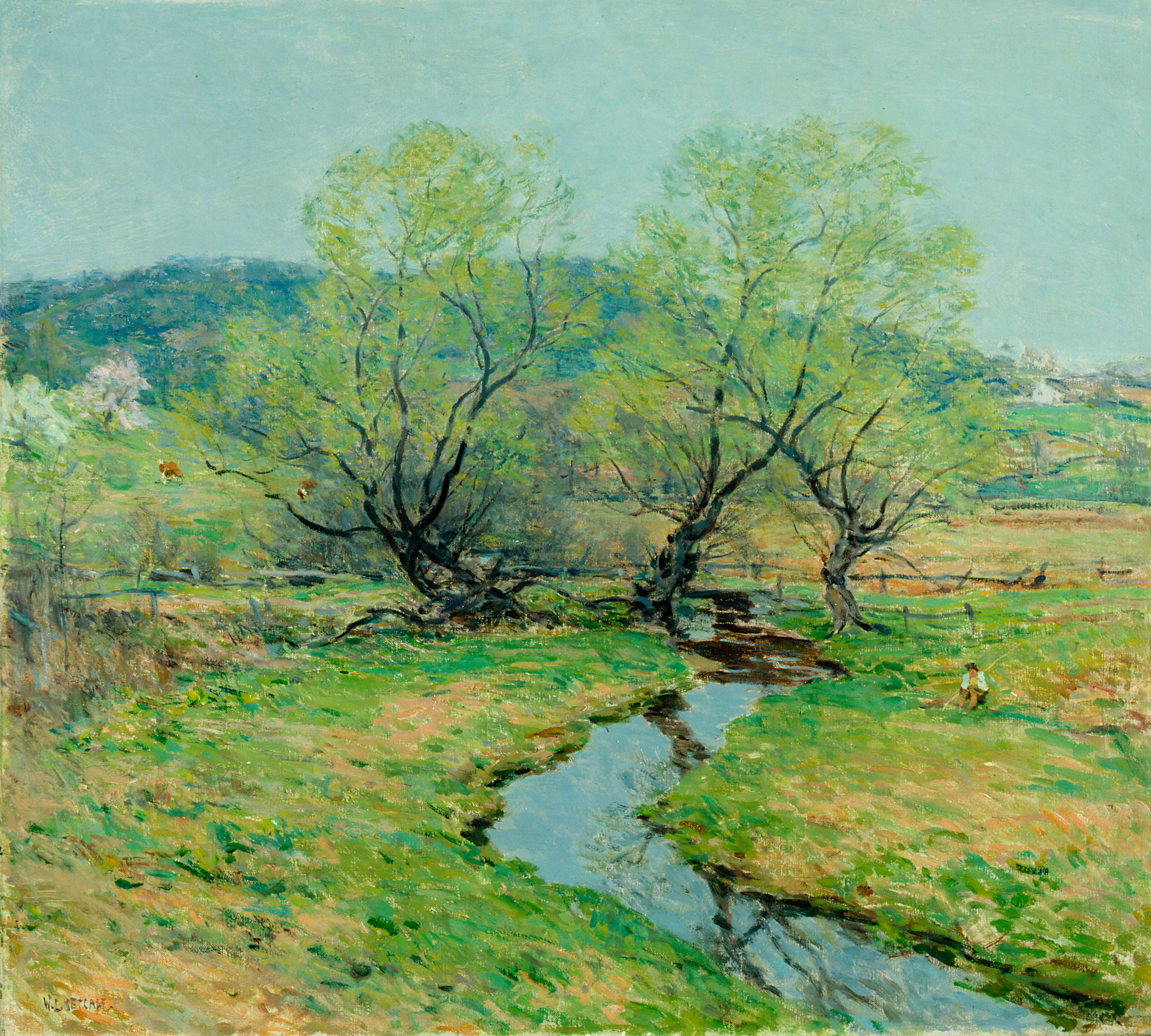 In his day, Willard Metcalf was regarded as the truly American Impressionist. And he was especially known as a painter of seasonal landscapes for in his works he so ably caught both the visual character and the changing mood of each passing season.

In this painting, executed in 1923 and titled Old Willows in Spring, Metcalf has effectively captured the essential spirit of spring as a glorious triumph over the winter which it inevitably displaces. Here the setting is early spring with its clean fresh colors, its clear and cool atmosphere, and its sense of delicate yet lively vigor. Of course green is the dominant color, loosely applied in soft edge patches and in a wide spectrum of closely related but not identical tones, with the most vivid ap­pearing in the immediate foreground, the less vivid in the middle ground, and the least vivid in the distance where dark purple tones also are introduced to describe the distant hills. This recession of color intensity pro­duces an impression of spatial depth which in turn is further emphasized by the narrow winding stream that carries the eye into the pictorial distance. But the crystal-like clarity and the surface stillness of the stream intensify an overall mood of tranquility and expand our awareness of space by sharply reflecting nearby forms.

What is so interesting here is the element of spatial ambiguity introduced by virtue of the distortion of scale, especially evident when we compare the size of the grazing cattle on the hills in the far distance with that of the little fisher-boy seated by the stream near the foreground. While the two are a vast distance from one another, the more distant cattle do not appear smaller than the nearby fisher-boy in the foreground. Still another element of ambiguity arises from the strong sense of solidity and permanence introduced in many of the physical details while contrarily a transitory mood implicit in the seasonal cycle is otherwise clearly evoked. Such ambiguity arouses viewer attention and thus heightens aesthetic interest and discovery.

In French impressionist painting, a sense of flux is generally evident but is far less common in American works, a fact which would suggest that the American mind more readily accommodates change that occurs within a system of permanent stability. Indeed, what Metcalf has achieved so enviably well here is the depic­tion of the sense of place typical of American painting. And in so doing he has made a visual statement that defines the stability of existence as a harmonious and continuing relationship between mankind and the natural environment to which all humanity is in­separably linked, both biologically and historically.

Willard Metcalf was born in Lowell, Massachusetts, in 1858. He studied in Boston and at the Academie Julian in Paris and was a founding member in 1898 of the American Impressionist group known as the “Ten”. Metcalf painted throughout New England and most particularly in Connecticut until his death in 1925 in New York City.