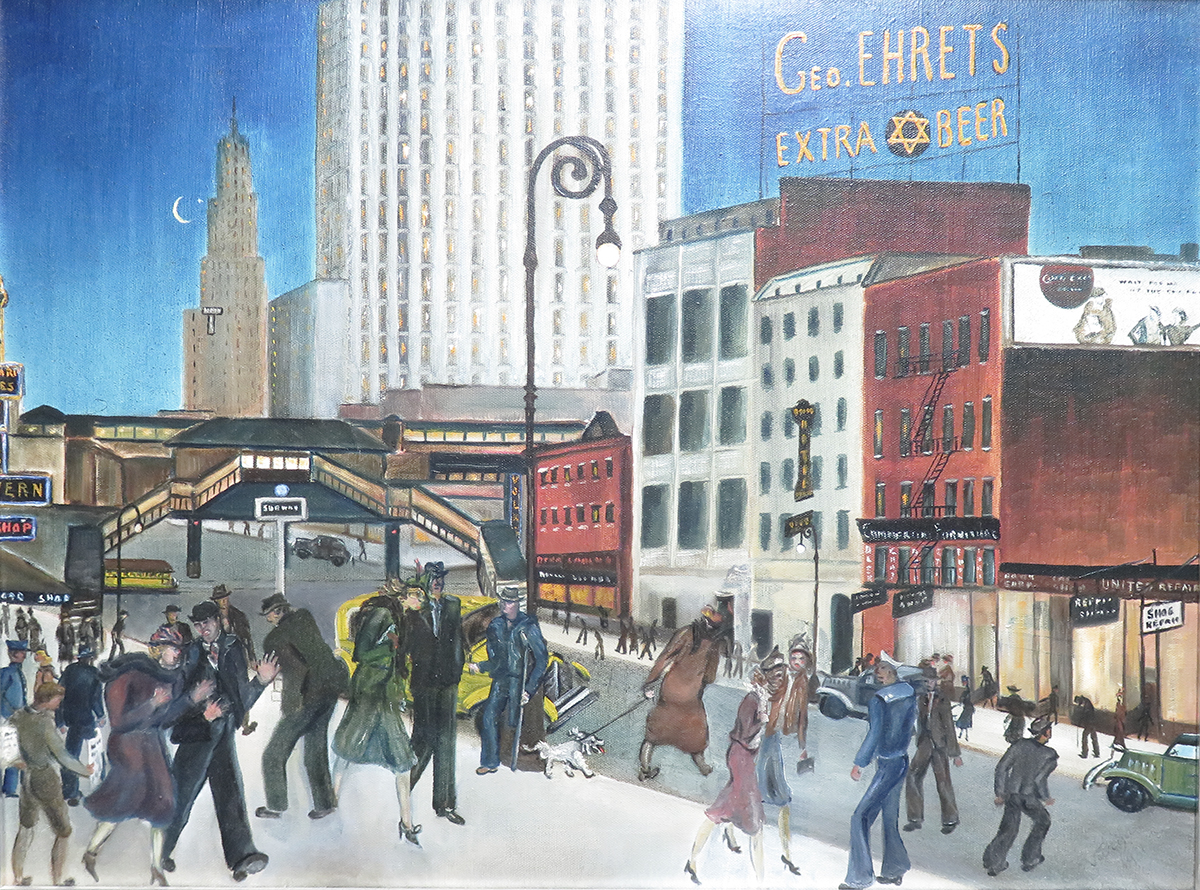 In this painting titled The New Moon by Margit Varga, a combination of verticals, horizontals and sharp diagonals becomes the framework of a dynamic composition that presents the topography of one section of New York’s Manhattan and at the same time pro­claims the excitement of everyday hustle and bustle on the city streets. Contrasting types — fashionably dressed men and women, an old woman walking her dog, a newsboy, a man with amputated leg who leans against a lamppost and sailors on shore leave — together define the tempo of life. All the figures ap­pear hastily drawn in an almost caricature-like manner but with much spontaneity, infusing the painting with a lively energy and convincing sense of gaiety and light heartedness. Yet that posture masked the reality of the times, for the painting was executed in 1931, a transi­tional moment when America had just emerged from the boom years of the 1920s following the close of World War I, and was now in the early grips of the Great Depression.

One of the most interesting features of the composi­tion is the abrupt shift in scale that the eye experiences as it moves from left to right or from foreground to middle ground. At the same time the artist has ably caught the distinguishing contrasts that characterize the urban setting, as for example the introduction of the gigantic skyscrapers, built just a year or two before this work was painted, and the old and somewhat dilapidated rows of storefronts from the past; or again, the tall and graceful turn of the century lampposts and the modern neon advertising signs. Such contrast is carried still further by the suggestion of the deafening roar of the elevated railway on the one hand and the quiet of the clear glow of the blue sky with its new moon, the feature from which the painting quite appropriately derives its title.

Margit Varga was born in New York City in 1908. She attended the Art Students League in New York and studied painting under Boardman Robinson and Robert Laurent. Her works are included in numerous private and public collections throughout the United States in­cluding the Metropolitan Museum of Art, The Penn­sylvania Academy of Fine Arts, the University of Arizona Art Gallery in Tucson, and many others. In ad­dition she has exhibited widely in such museums as the Whitney Museum of American Art, the Carnegie In­stitute, the Corcoran Gallery, the University of Illinois, and the Art Institute of Chicago. She was art editor of Life Magazine from 1936-1956 and assistant art director from 1956-1960. From 1960-1970, she served as art con­sultant for Time, Inc. Her studio today is located in Bridgehampton, New York.