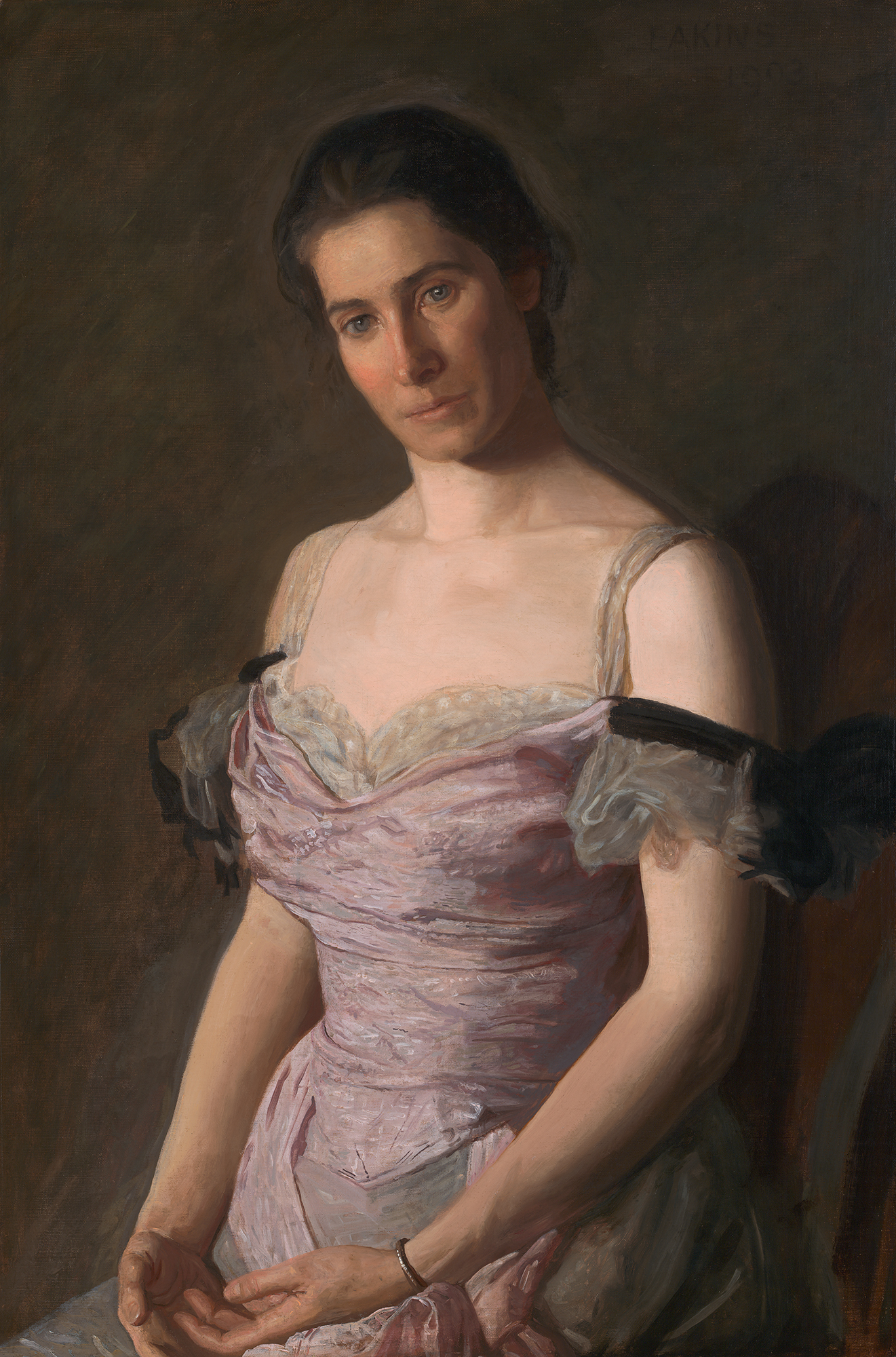 Today, Thomas Eakins takes his place among the greatest names in American art, but in his own lifetime his art suffered rejection by the social and artistic establishment of his native Philadelphia. Eakins’s outspoken nature and forward-looking opinions took a toll on his reputation. He received bitter criticism for his unconventional teaching methods and was forced to resign from the Pennsylvania Academy of the Fine Arts in 1886 after an infamous incident in which he fully disrobed a male model in front of a class that included female students. The human figure was always central to Eakins’s work, and after resigning from teaching he largely limited himself to portraiture.

Eakins did not flatter sitters in the elegant manner of John Singer Sargent, nor endow them with the dashing charm seen in the portraits of William Merritt Chase. Instead Eakins portrayed his subjects with penetrating realism, constantly striving to plumb their psychological character. The frank nature of Eakins’ work did not endear him to potential clients, as is proved by the fact that of the 246 portraits he is known to have painted only twenty-five were commissioned by the sitters. Many of Eakins’s subjects were friends or people he admired and would ask to pose for him. Often, he would give the completed painting to the sitter with the inscription TO MY FRIEND.1 Eakins inscribed the portrait of Mary Hallock Greenewalt with her name in Latin on the back of the canvas. This was an honor he usually reserved for male subjects; such an indication of his admiration for the sitter only appears on one other portrait of a woman.

Mary Hallock Greenewalt was internationally known for her interpretations of Chopin and was also a pioneer of color-light effects used in con­junction with musical performances. A Philadelphian, Greenewalt was likely an acquaintance of Eakins and his wife, Susan MacDowell Eakins. Mrs. Eakins was herself an accomplished amateur pianist and, with her husband, kept friendships with many musicians. The Greenewalt painting is one of eleven portraits of musicians produced by Thomas Eakins.

Eakins’s portrait of thirty-two-year-old Greenewalt captures both the beauty and the intel­ligence of the subject, who gazes directly out at us, commanding our attention. She is dressed in a pale violet silk evening gown as if ready to perform a recital. Her strong, expressive hands, lightly resting together in her lap, are upturned to show the palms and underside of the fingers. The form of her head is modeled in a subdued light, with a shadow falling on left side of her face. Her strong neck and shoulders are more strongly illuminated. The whole composition is set against a dark ground, which is modulated only to suggest the back of the chair on which Greenewalt sits.

The precise rendering of Greenewalt’s face and body provides clear evidence of Eakins’s complete understanding of human anatomy, gained through years of dissection classes. Around the time he painted the Greenewalt portrait, Eakins also was actively studying the body not only in drawing and painting but also in sculpture. This work in three dimensions may have contributed to Eakins’s achievement of a highly sculptural rendition of Greenewalt in her painted portrait, and it is signifi­cant to note that he also made a small bronze relief portrait of her in 1905.2 The location of the bronze is unknown today, but the oil portrait pleased Greenewalt greatly. She kept it in her pos­session until very late in her life, when it entered the Wichita collection.