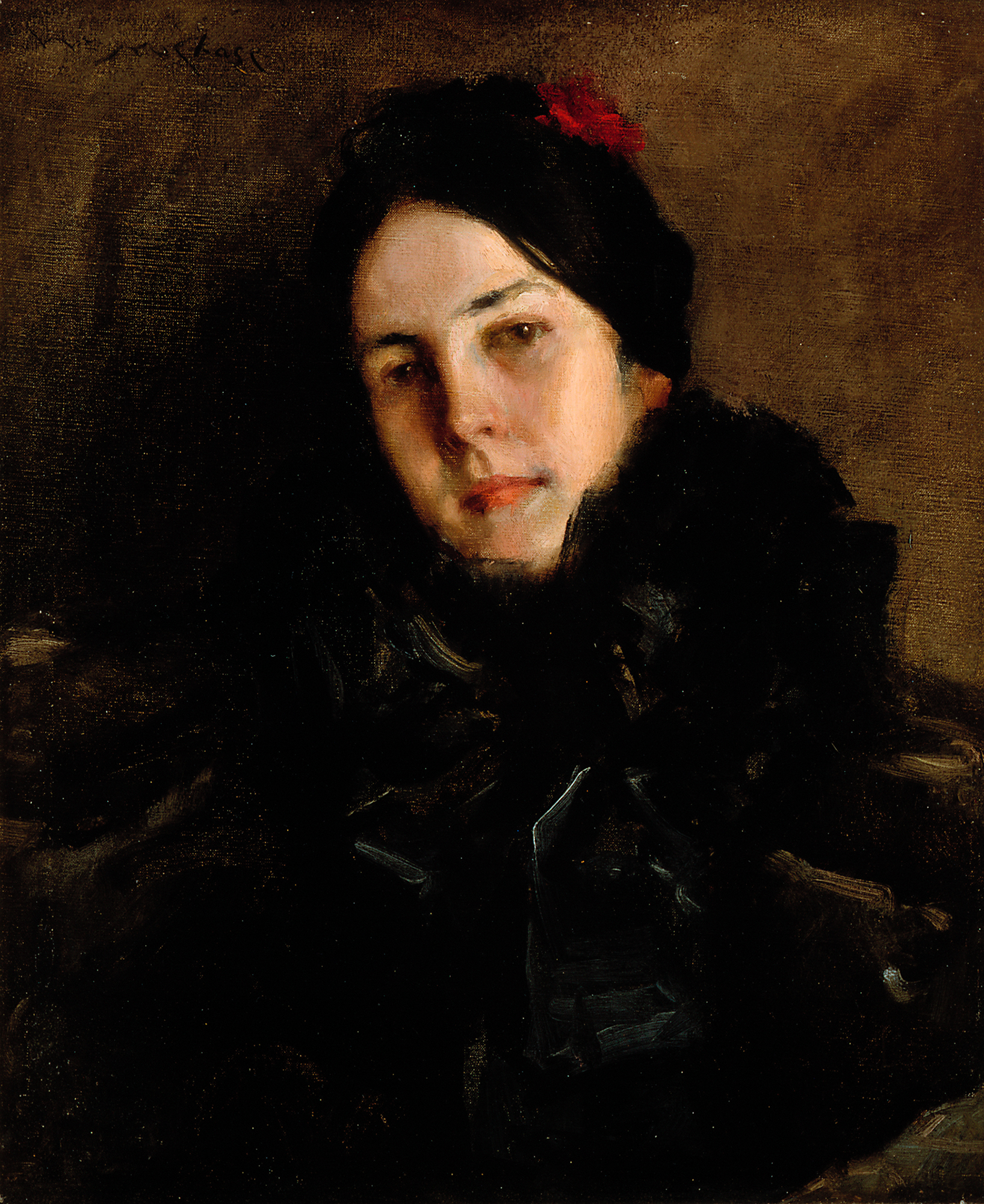 Whether in a sun-baked Italian villa, sensual Japanese interior, or the back yard of his own studio, William Merritt Chase painted life around him with confident virtuosity and a dynamic eclecticism that sparkled throughout his career. Chase was born in Williamsburg (now Nineveh), Indiana. His first teachers were local artists, upon whose urging Chase enrolled in the National Academy of Design in New York in 1869. Three years later he departed for Europe, to study at the Royal Academy in Munich, a city which in the 1870s rivaled Paris as the premier European art center. During his six years of study in Munich, augmented by sojourns in Spain and Italy, Chase assimilated the Munich School’s rich, dark palette and appreciation for the Old Masters, as well as the experimental, painterly styles of James McNeill Whistler and Mariano Fortuny. Upon returning to the United States in 1878, Chase began what would become a long and prolific teaching career at the newly formed Art Students League. As both teacher and artist, Chase stressed the appreciation of the act and history of painting as the way to true innovation and individuality. “Originality is found in the greatest composite which you can bring together,” Chase said. “Take the best from everything.”1

Chase met Alice Gerson, his future wife, in 1880 at the home of her father, Julius Gerson, a New York arts patron. Although 17 years her senior, and a self-termed “confirmed bachelor,” Chase was smitten by the precocious and charming young girl. After a six-year courtship, Chase and Gerson were married. An intelligent and radiantly beautiful woman, Alice was not only Chases favorite model and mother of his nine children, but also, in the artists view, his most devoted friend and best critic.2

The eclectic spirit of Chase’s best work is apparent in the Wichita Art Museum’s Portrait of Mrs. C. (Mrs. William M. Chase), painted about 1895. Alice appears to wear the traditional formal costume of a Castillian Spanish noblewoman, of the kind in which she frequently dressed for the family’s playful tableaux vivants, in which the entire family, visiting friends, and Chases students would stage “re-enactments” of famous paintings. The rich black tones of Alice’s costume and the dramatic chiaroscuro display the lingering influence of Chases Munich School training, while the expressive realism of Velasquez is apparent in Alice’s features. More contemporary are the spirited brush-work and surprising touch of bright color (in the rose in her hair), resembling the styles of Whistler and Sargent. Further adding to Chases “composite” of Old Master and contemporary influences is the paintings close-cropped depiction of Alice in a manner derived from the engaging, immediate portraiture style of the French Impressionists. The image was actually cut down by Chase from a larger composition in the years following its completion in an attempt to “modernize” the look of the work by using this Impressionist convention.3 Alice’s steady gaze and assured pose are the focus of Chases portrait; her slightly clouded features add an air of mystery to her mood, while her unflinching pose suggests a confident sensuality. Chases delicious blend of straightforward portraiture and painterly display lends itself perfectly to this work’s reserved celebration of both the intellect and beauty of his beloved.