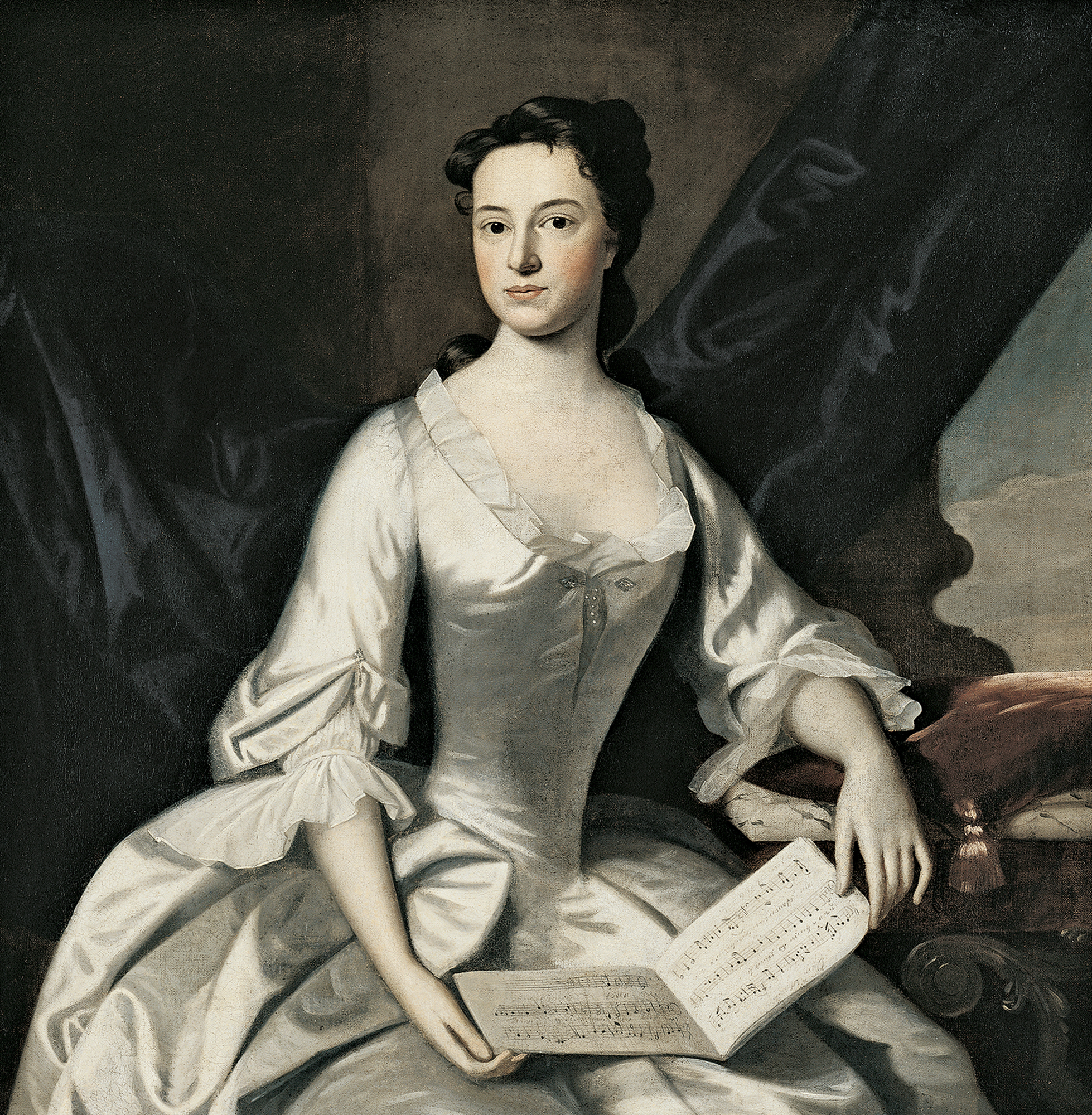 Mrs. Barlow Trecothick, nee Grizzel Apthorp, was the eldest of eighteen children of Charles and Grizzel Eastwick Apthorp. Her father, born in England, was in Boston in 1726 serving as the paymaster and commissioner of the British naval and military forces, which had their headquarters in Boston. He later became “…the greatest merchant on this continent,” according to his obituary in Portsmouth, New Hampshire Gazette in 1758. Her mother, born in Jamaica, came to Boston in 1716 and was married ten years later. Mrs. Trecothick was married on March 2, 1747, in King’s Chapel, Boston, a church which had been founded by her father. In his basic text, Henry Wilder Foote has described the portrait of Mrs. Barlow Trecothick as follows:

“The subject is seated nearly full font before a brown wall across which a dark blue-green curtain is rather awkwardly draped. At the right, the base of a column is shown, and a bit of sky and cloud. She is represented as a young woman, probably under twenty years, with a fresh complexion and dark brown hair and eyes. The flesh tints of the breast and arms are pallid, having faded rather badly.

She is simply but elegantly dressed in pearl-gray satin trimmed with white muslin and wears a jewel in her bodice. In her lap she holds a songbook, showing words set to three staves of music on each page. Her left arms rests on a red velvet cushion with a tassel, which, in turn, lies on a marble-topped table. The portrait, though unsigned, is eminently characteristic of Feke’s work. The figure is placed with unusual skill on the nearly square canvas, and, with the exception of the awkward handling of the curtain and the pallor of the arms and breast, it makes one of Feke’s most delightful and charming pictures.”1

Pete Mooz has pointed out that the almost square size is “unique in Feke’s oeuvre.”2 This might suggest that the canvas had at one time been trimmed, but this was not substantiated by an examination of the fabric. Like Copley’s portrait of Mr. James Otis, Feke based his painting on a mezzotint. The source is a 1775 print by A. Van Haecken after an oil by J. Van Kaecken.3 A comparison of Feke’s portrait with the mezzotint does bring out Feke’s “unusual skill” in adjusting the sitter to a square format. In the oil the entire torso and head have been raised higher on the picture surface to accommodate a more nearly square shape.

According to Foote the picture was “Presumably painted at Boston in 1748, at the same time as the portraits of her parents.”4 Charles Coleman Sellers also subscribes to the 1748 dating: “She had been married a year when her parents’ portraits, both signed and dated, were painted by Feke, and it may not be supposed that her own is a wedding portrait of the same date.” Stylistically, the painting displays the formula of the Boston portraits. The strong pyramidal composition, the simplified folds of the dress, the softened highlights and the expressive hands recall the well-known portraits of Mrs. Josiah Martin (Collection of George Hewlett, Brooklyn, New York), ca. 1748, and Mrs. James Bowdoin II (Bowdoin College, Brunswick, Maine), dated 1748.