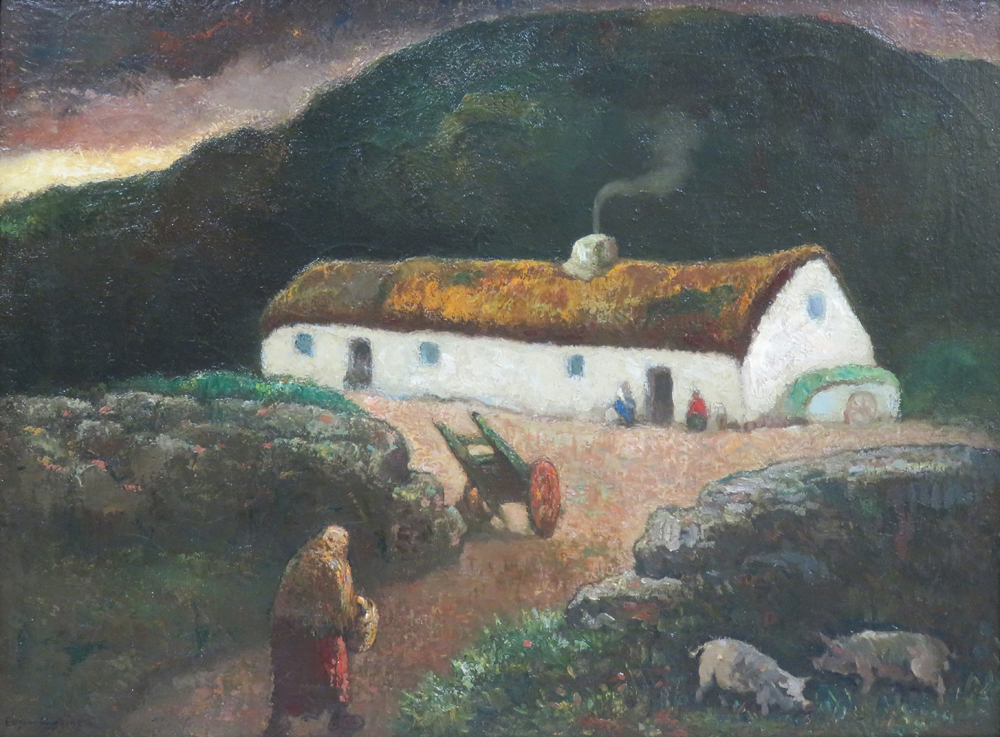 Eugene Higgins was born in Kansas City, Missouri in 1874 and died in New York City in 1958. Throughout his long and productive career as painter and etcher, a profoundly sentimental compassion for the downtrod­den and the oppressed dominated the theme of almost every work he produced. For Higgins was a member of the democratic realist school and worked within the ear­ly 20th century Ash Can tradition of painting, attemp­ting to record life as it was rather than as it should or might be. He was never a pessimist, but neither was he oblivious of tragedy in the lives of society’s casualties, of the poor and homeless or simply of the weary and toil laden.

In 1925, Higgins visited Ireland, the source of inspira­tion for this painting titled A Mountain Home: Achille Island, Ireland. Here a sturdy old peasant woman, slightly bent over and carrying a basket on her arm, trudges towards her home situated on a hill at the end of a mountain road. Her bulky form echoes the crudely built stone house with its thatched roof and animal shed at the left, and the rugged rocky terrain of the desolate setting as a whole. Deep shadows, dark and somber tones and a fading afterglow in the distance together evoke a mood of melancholy. Yet Higgins saw honor and self-respect in toil and here in the figure of the Irish peasant woman he imparts a sense of dignity, substance and sureness of purpose. At the same time, he introduces a sense of hope and individual achievement by the billow of smoke, which rises from the chimney and sug­gests the warmth and security of home.

As a young man, Higgins studied at the Ecole des Beaux-Arts in Paris. Yet his works reflect no strong academic interest but instead are highly generalized symbolic statements with little or no emphasis on par­ticularities. Moreover, his repeated use of somber tones and the application of broad masses of thick opaque pigment recall the technique of the American romantic visionary, Albert Pinkham Ryder. At the same time his treatment of the human figure bears obvious resemblance, both in sentiment and in style, to works by the noted 19th century French painter Millet and, to a lesser degree, Daumier.