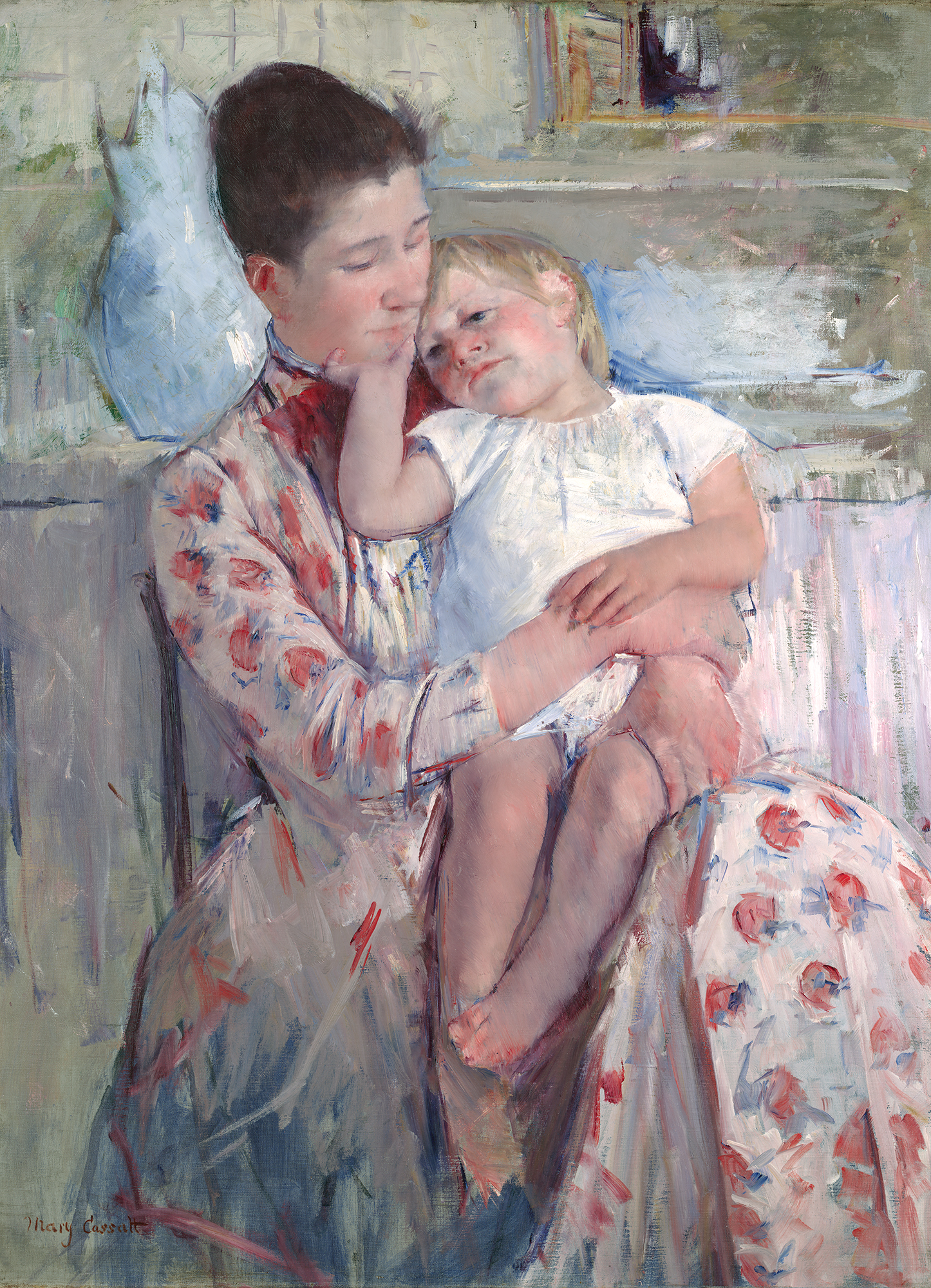 The impressionist painter Mary Cassatt devoted much of her career to a modern redefinition of the ancient theme of motherhood.  Mother and Child is a particularly vibrant example of Cassatt’s signature work. She was an American artist of international influence, the only American participant in the French impressionist movement, and an independent spirit who achieved her own unique vision of the aspiration she shared with French colleagues Edgar Degas and Edouard Manet, and that was to express the heroism of modern life.

Although unpretentious in its literal details, the scene nonetheless achieves an aura of elemental dignity. In a gesture of unaffected tenderness, a plain-featured woman wearing a simple cotton print dress embraces her sleepy toddler, a blond robust youngster of indeterminate sex dressed in a simple white cotton shirt and nestles the child firmly on her lap. The two figures are presented close-up, their contours filling the picture frame. Behind them the artist has rendered the barest of interior detail in vigorous, sketchy brushwork: cropped views of a straight back chair, a small cloth-draped wash stand holding an undecorated ewer and basin, and in the upper right-hand corner, the edge of a wood-shuttered window.

Cassatt’s choice of subjects and setting evoked for her upper middle class audience a picture of the contemporary and the commonplace. The mother’s appearance suggested that of a country woman or domestic servant. She and her nondescript furnishings, as well as the studied casualness of impressionist brushwork removed the scene far from the sacred, picturesque, or refined realms familiar to concurrent Salon conceptions of motherhood.

Cassatt also eschewed conventional sentimentality by imposing a solemnity of rhythm and stable unity upon the moment-to-moment sensations of touching, holding, and embracing. Conscious and unconscious caresses proceed in a litany of check against nodding head, small hand grasping mother’s chin, small relaxed hand and arm resting atop mother’s large anchoring hand, with the latter in its turn set atop her second hand as it muscularly grasps the baby’s thigh. The two bodies lean into one another forming an easy yet firm dovetail that functions compositionally and symbolically as an indissoluble unit.