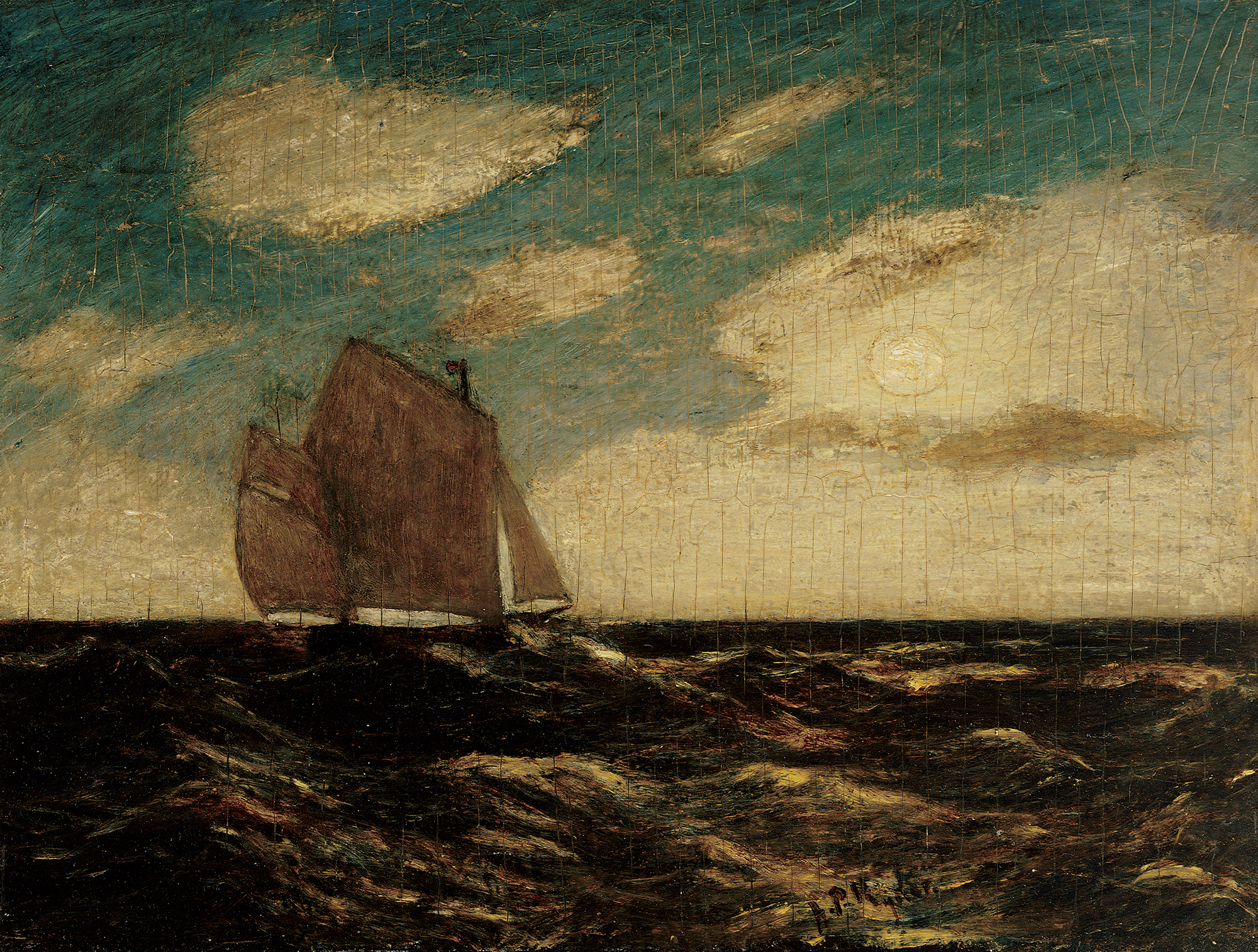 Moonlight on the Sea

Albert Pinkham Ryder, painter of marines and mythical narratives, a man who was eccentric in his personal habits, unorthodox in his painting methods, and devoted to his art exclusive of all worldly interests, functioned as a talisman of modernity for generations of twentieth century American artists, everyone from Robert Henri and Marsden Hartley to Jackson Pollock and Alex Katz. In the minds of the avant-garde, Ryder’s indifference to fame and comfort as well as the near abstract character of some of his cloud/seascapes ranked him with 19th century American transcendentalist writers, Walt Whitman and Ralph Waldo Emerson, as an icon of personal freedom and spiritual expansiveness.

In the early 20th century Moonlight on the Sea was one of the best known paintings by American Romantic painter Albert Pinkham Ryder.[1] The influential English art critic Roger Fry used this painting to illustrate his article identifying Ryder as a precursor of abstraction.[2] Although Fry characterized the simplified of forms of Moonlight on the Sea as willfully awkward and gauche, this particular image of a ship is realistic and the sea calm relative to portrayal of those same elements in the more apocalyptic Ryder marines depicting anonymous “boats” upended on violent seas. Knowledgeable viewers easily identified the ship on the distant horizon in Moonlight on the Sea as a ketch, a two-masted fore-and-aft rigged sailing vessel, popular for long-distance voyages. The latter would have been familiar to a man like Ryder who had descended from old Cape Cod families and had been raised in the old whaling port of New Bedford, Massachusetts. In this image Ryder’s ketch appears to be an able vessel set evenly upon the straight horizon line of a choppy but relatively tranquil ocean surface.

Despite the absence of immanent danger, Moonlight on the Sea is nonetheless a quintessential Romantic image: a solitary craft, symbolic equivalent of the fragile mortality of man, journeys alone and without a marker across a vast and silent sea, symbolic embodiment of the sublime immensity of eternal being. The mellow melancholy light of the moon fills the ship’s canvas sails with a delicate translucent glow, glistens upon the rolling crest edges of the dark water and etches the silvery contours of the languorously organic clouds against the faded blue fabric of the sky.