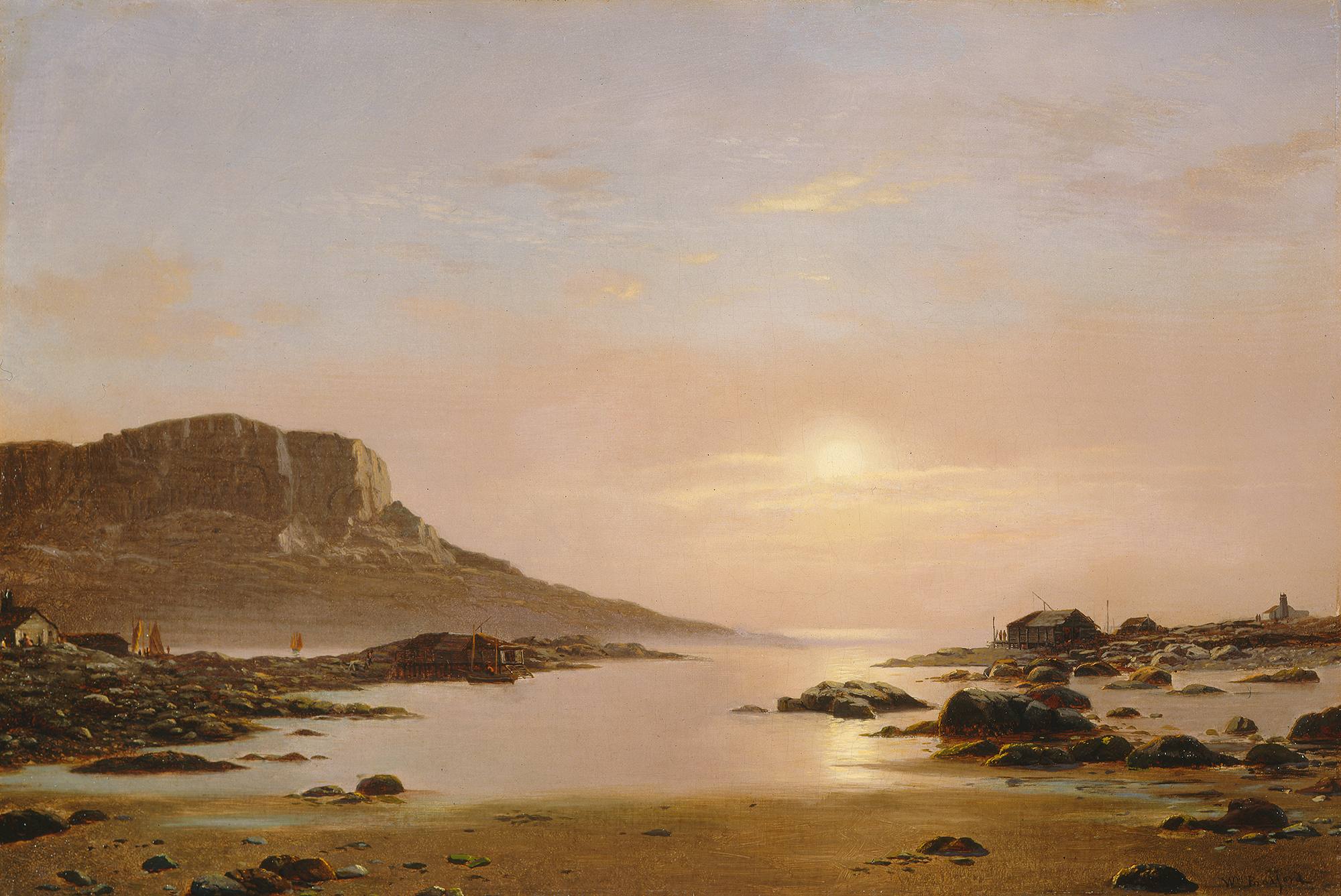 During the 19th century, many American artists found a compelling fascination in adventurous travel to remote and sometimes largely unexplored lands where fresh experiences, exotic subject matter, strange natural forms and novel light and color effects served to excite their imaginations and ultimately to influence their art. This was certainly the case with William Bradford who throughout the 1860’s made regular annual summer voyages to Newfoundland and the Arctic regions. There he found inspiration for many of his remarkable works including this superb painting titled Midnight Sun, Labrador. Bradford is known to have made careful firsthand drawings and completed some on-the-spot paintings during his travels. However, his paintings were generally executed in his studio where, following a rather common practice of the period, he relied heavily upon photographs taken during his numerous voyages. But Bradford did not copy directly from photographs. Instead he invented original compositions using photographs merely as sources of inspiration and of subject matter, or as he himself once stated, “…I gather my inspirations from my photographic subjects just as an author gains food from his library….”

The interest in meticulous detail and in incorporating local landmarks in Midnight Sun, Labrador would sug­gest that Bradford might have referred to photographs of the site when about 1875 he painted this handsome work. Yet the painting is more than simply a record of the physical features of Labrador for, from a composi­tional standpoint, just as significant is the carefully thought-out organization of harmoniously contrasting areas of light and dark. Here at the left a bold towering rock, somewhat reminiscent of the crumbling ruins of the castle fortress, is balanced by the light and com­paratively open space at the right. And, from the coast in the frontal plane, the eye is carried diagonally along a narrow water inlet amidst scattered patches of dark rocks toward the luminous horizon seen in the far distance. There, attention is focused on the low sun sur­rounded by a hazy corona which floods the pictorial space with a strange spiritual glow, creating painterly passages of abstract color and color tones throughout the composition. Interest is heightened by the textural contrast between the rugged rocks and the frosted satin-like surface of the icy water, and by the juxtaposition of massive natural forms and the barely visible human figures, fisherman shacks, and fishing boats. Indeed the dramatic tension established here between the eternally enduring quality of nature and the transient character of man and his physical creations — minute in scale but patiently rendered with factual precision — has strong religious overtones closely paralleling those expressed by Hudson River School painters throughout the several decades before Bradford executed this work. And this tension coupled with the eerie stillness of the scene and the pervading sense of timelessness together impart a surrealist mood to the composition, which in a very real sense would seem to anticipate the works of more than one American artist of our own era.

William Bradford was born in Fairhaven, Massachusetts, in 1823. As a young man, following in the footsteps of his father, he operated a wholesale clothing business in New Bedford, Massachusetts. However, he was also a self-taught artist and, in 1857, he turned altogether from business to painting and for two years worked with the Dutch-born marine painter Albert Van Beest. In 1860 Bradford first exhibited at the National Academy and, in 1861, he took the first of his many visits to Labrador and the polar regions. In 1873 he published in England his well-known book titled The Arctic Regions, illustrated with original photographs taken on his numerous voyages, and was soon thereafter commissioned by Queen Victoria to execute a painting now in the Royal Collection in London. Bradford came to be the most prominent American painter of Arctic scenes, but he also enjoyed a reputation as a photographer and lecturer. While on a lecture tour in New York City, he died in 1892, five days before his 69th birthday.