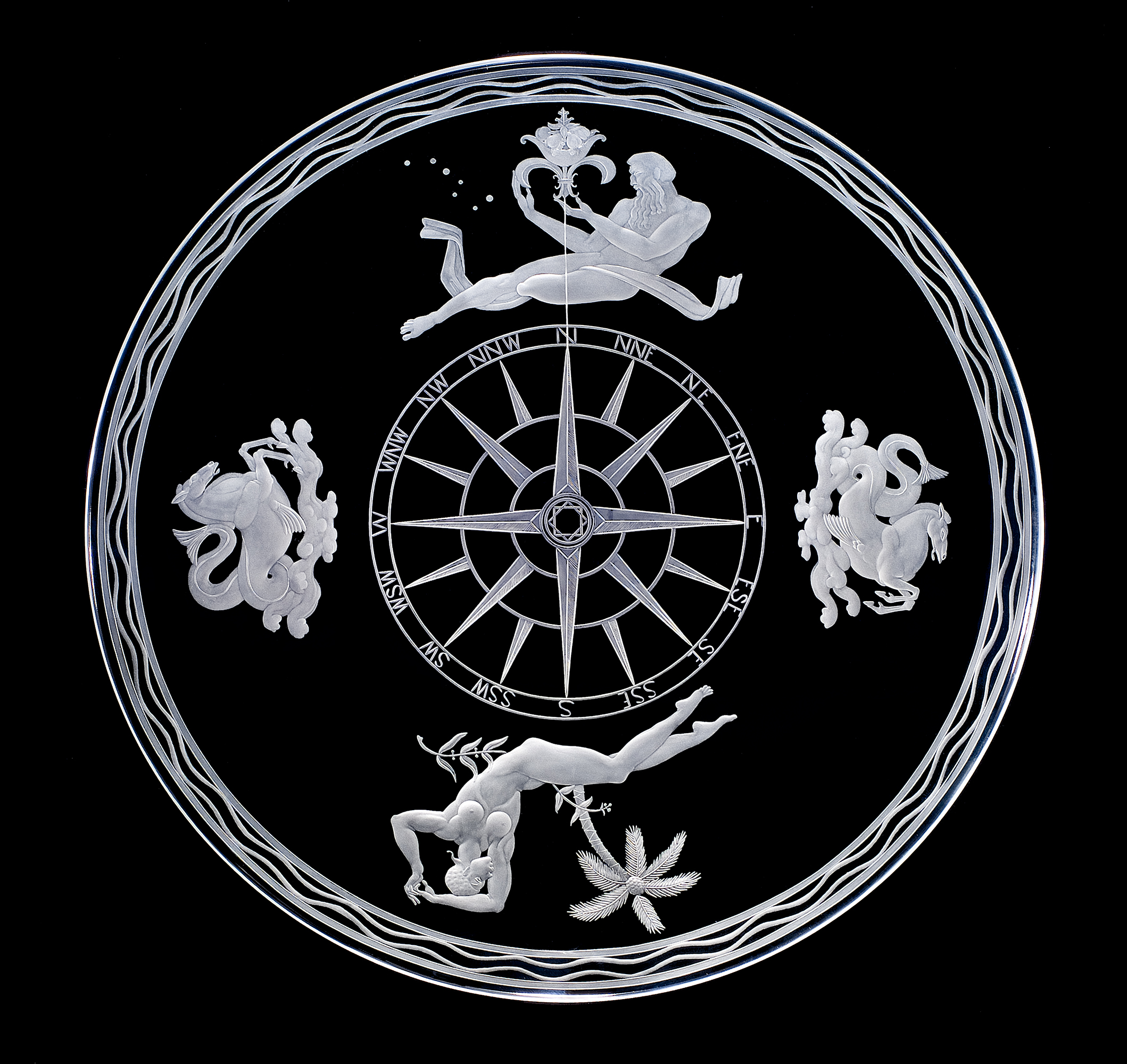 When his uncle proposed closing Steuben Glass in the first years of the Depression, Arthur A Houghton, Jr. asked if he could “have a crack at it.” Confident in his taste, and in the business principles of the Corning Works, he thought a radical reorganization of the design and production processes could revive Steuben. Key to his reinvention of Steuben was the removal of artisan-craftsmen from the design process. The responsibility for design was to be transferred to university-educated “fine” artists. The two men Houghton chose to assist him in the reorganization were John M. Gates (an architect trained at Harvard and Columbia) and Sidney Waugh (a sculptor trained at Amherst and MIT).

Of the three men, Sidney Waugh (1904–1963) contributed the most to the “new” Steuben. He created over 125 designs for the form and engraving of Steuben Glass, including many of their acknowledged masterpieces, such as the Gazelle Bowl, Moby Dick, and The Merry-Go-Round Bowl (the wedding gift of the United States to Queen Elizabeth II).

The Mariner’s Bowl of 1935 is an exceptional example of Waugh’s work for Steuben, as well as of his design genius. Like his best sculptural work in all media, it is classical in both form and subject matter. In fact, his iconographic program for the bowl was so complicated that the official Steuben press release, which usually emphasized the erudition of the designer’s concept, does not grasp the essence of Waugh’s program.

The release notes that surrounding the central mariner’s compass are four “decorative groups.  . . . To the north a bearded man holds an elaborate fleur-de-lis . . .”  The “bearded man” is Poseidon/Neptune, the god of the sea, invoked by ancient mariners to ensure a safe voyage at sea. Waugh’s depiction of the god closely follows the conventions of antiquity and the Renaissance:  a powerful, muscular old man with wild hair and long locks of beard. Waugh brilliantly transforms the standard attribute of Neptune—a trident—into a more complex and meaningful motif: the fleur-de-lis, which the god holds aloft (like he would his trident) just where the North Star would appear in the sky (given the placement of the Big Dipper). Waugh emphasized the prominence of the North Star (or Pole Star) because he must have known from the history of navigation that to determine latitude at sea, navigators relied on measurements obtained by aligning an astrolabe or cross-staff with the Pole Star. Waugh embellished the Star/fleur-de-lis/trident with fruit to show the abundance that would result from gauging properly the location of the Star.

The other three decorative groups also fit the imagery of the god of the sea.  To east and west of the compass are the fish-tailed horses known as hippokampoi that drove Poseidon’s chariot. And to the south is the languorous figure of Amphitrite, wife of Poseidon and queen of the sea. As in many classical mosaics, she is shown with her hair in a tight net, raising her arms over her head and pinching her fingers together. Yet here again Waugh lends his own touch to the classical tradition through the addition of a palm tree, which both balances his composition and gives the viewer an obvious modern reference to the south. Waugh’s understanding of history placed him firmly in the classical tradition, while his subtle manipulation of its imagery, as well as his individual means of stylization, kept the tradition alive and relevant in the twentieth century.