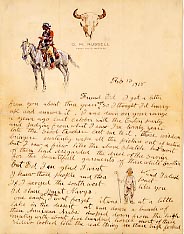 Charles M. Russell was a premier artist of the American West. His illustrations, paintings, and sculpture of Montana cowboys, Plains Indian tribes, mountain men, the landscape and stories of late 19th century life in the American west, influenced generations of writers, western painters, and moviemakers. Russell’s art and his cowboy-artist persona as an authentic artifact of the Old West contributed significantly to the creation and propagation of the mythic import of the West in American’s articulation of its unique national identity. This example of an illustrated letter to a fellow western artist, Ed Borein, is one of twenty nine art works by Charles M. Russell, including oils, watercolors, pen and ink illustrations, drawings, and sculpture in the M. C. Naftzger Collection, a carefully assembled group that comprehends examples of early and late Russell’s and all the media in which he worked.

Russell’s personal identification with the ideals of independence, love of land, and moral superiority of the western man, whether red or white, is nowhere more explicitly stated than in his numerous illustrated letters written to a wide circle of friends that included fellow western artists such as New York-based Ed Borein, Montana ranchers, cowboys, saloon-keepers, bankers, movie actors, vaudeville star Will Rogers, and distinguished patrons who followed his career from such sophisticated centers of art as New York and London.

The 1918 Letter to Ed Borein is a minor masterpiece in both writing and illustration. Even though the letter was written to a close friend, it is a composition fully self-conscious in its style, philosophical content and concision. As scholar Frederic G. Renner explained, Russell wrote in the “vernacular” of common western speech. Yet, Russell definitely had a particular class of people in mind when he spoke or wrote, that is, the frontier men who scorned book learning and all the pretensions of civilization in favor of the wisdom gained from nature and hard experience. He expressly enlivened his writings for the sophisticated reader by means of comic grammatical errors, misspellings, colorful figures of speech, and self-deprecating humor. In this particular letter, Russell reiterated a favorite theme of his art and writing: reverence for that icon of Romanticism, the noble savage, and specifically for America’s own unique natural man, the Indian. He expressed, here as elsewhere, his disgust for civilization in his condemnation of the United States government’s attempts to make farmers out of men who were born to be free and wild.

The watercolor sketches that accompany the text exhibit in brief, the qualities that characterize all of Russell’s imagery.  With quick deft pen strokes, he depicted the ethnic costume and regal bearing of a Navaho horseman who, in a typically ironic Russell footnote, is calmly smoking his native tobacco in its contemporary form, as appropriated by white culture, the rolled cigarette. In the remaining two drawings Russell contrasted the “sad sack” appearance of the Indian forced to wear denim overalls and wield a hoe with three Navaho in exotic ceremonial dress dancing a sacred dance, Yei-Be-Chai, with energy that Russell described as sublimely “wild and scary.”