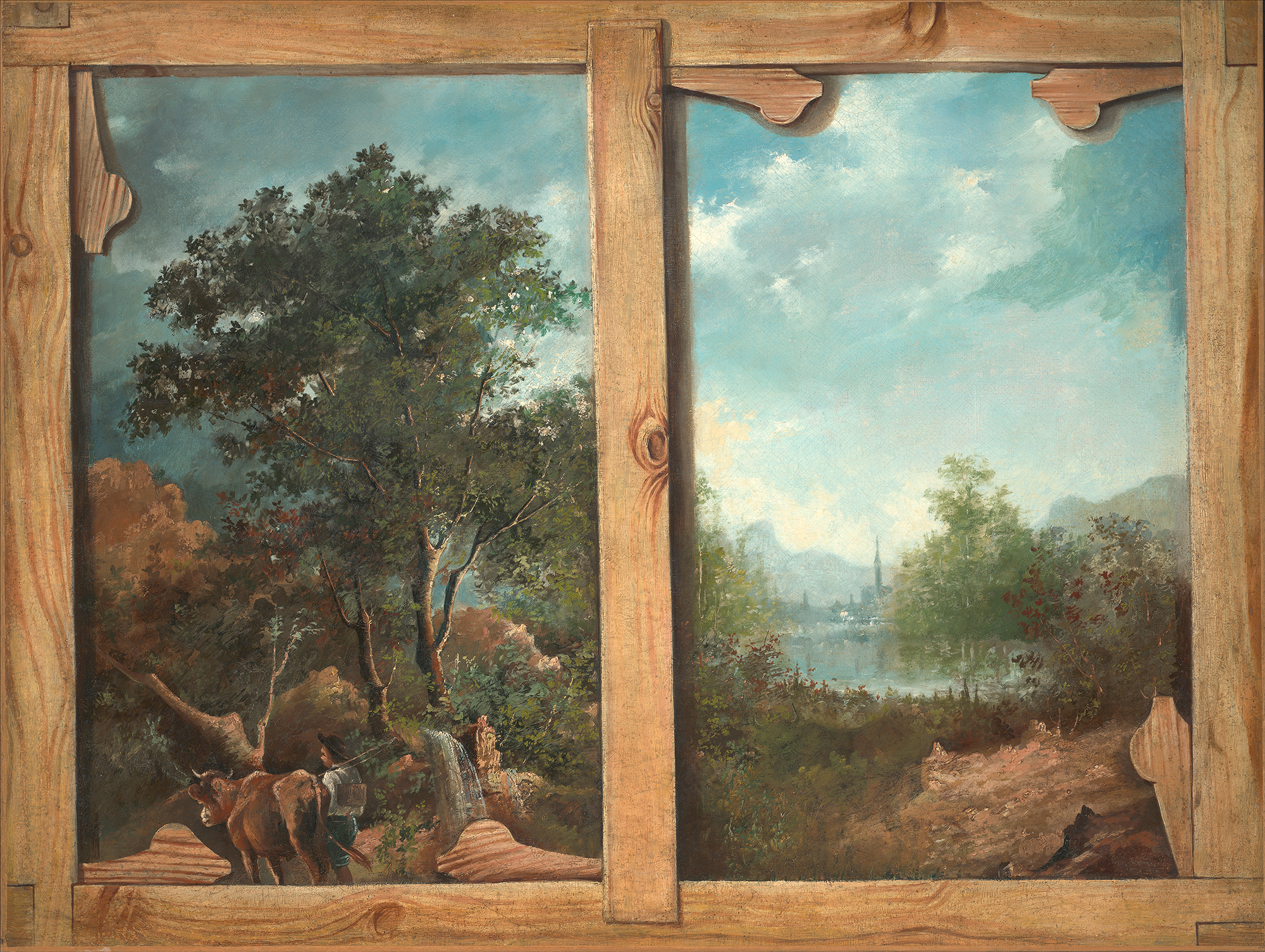 Landscape Seen Through a Stretcher

The art historian Alfred Frankenstein, who in 1948 discovered the work and persona of 19th century trompe l’oeil painter John Haberle, called Haberle “a powerful parodist” and distinguished him from the other two late 19th century American masters of the genre, William Harnett and John Frederick Peto, as wittiest and most mischievous of the three. The trompe l’oeil or “fool the eye” aesthetic that flourished in American painting particularly during the third quarter of the 19th century celebrated craftsmanship while it also questioned the certainty of the real. Landscape Seen through a Stretcher is a delightful example of the illusion of the reversed canvas, a subject invented by the seventeenth century Dutch painters and a favorite among American artists, particularly Haberle.

In this image Haberle presents what appears to be the back side of a painting because the viewer observes the stretcher bars or wooden frame around which a canvas has been nailed, the nail heads showing on the end edges of the wooden frame. The viewer sees the keys or wooden wedges with rounded heads placed in the corners of the frame where they were used to tighten the frame and make the canvas surface tauter. Then, since the viewer is looking at the back of a canvas, the painting which she observes, imaginatively seen in depth an inch or so beyond the stretcher bars—a dreamy view of a European landscape with a wooded area in the foreground, punctuated on the left by figures of a cow and herdsman and then in the distance, painted in blue tints, a picturesque old village distinguished by a church with a tall steeple, all set against mountains—is presumably a painting that has been rejected by the artist for some unknown reason and turned over in reverse to allow the frugal painter to work on the other side, the new front side which the viewers cannot see.  The hoax is of course that all is illusion.

The notion of painting a reverse canvas appealed to Haberle on many levels: it was a trick that drew upon insider knowledge of the painter’s profession; it was a triple illusion, a front of the canvas pretending to be the back, painted canvas pretending to be wood and metal, and a painting of a painting. There is also a suggestion of Haberle, who was no shrinking violet, thumbing his nose at his fellow artists by demonstrating his ability to execute, should he have wished, the sentimental tourist views of European genre and landscape that were so popular. Unfortunately for Haberle and for American art, the artist enjoyed only a brief career from about 1887 to 1891 because he took up painting as a second career and then suffered the onset of blindness.