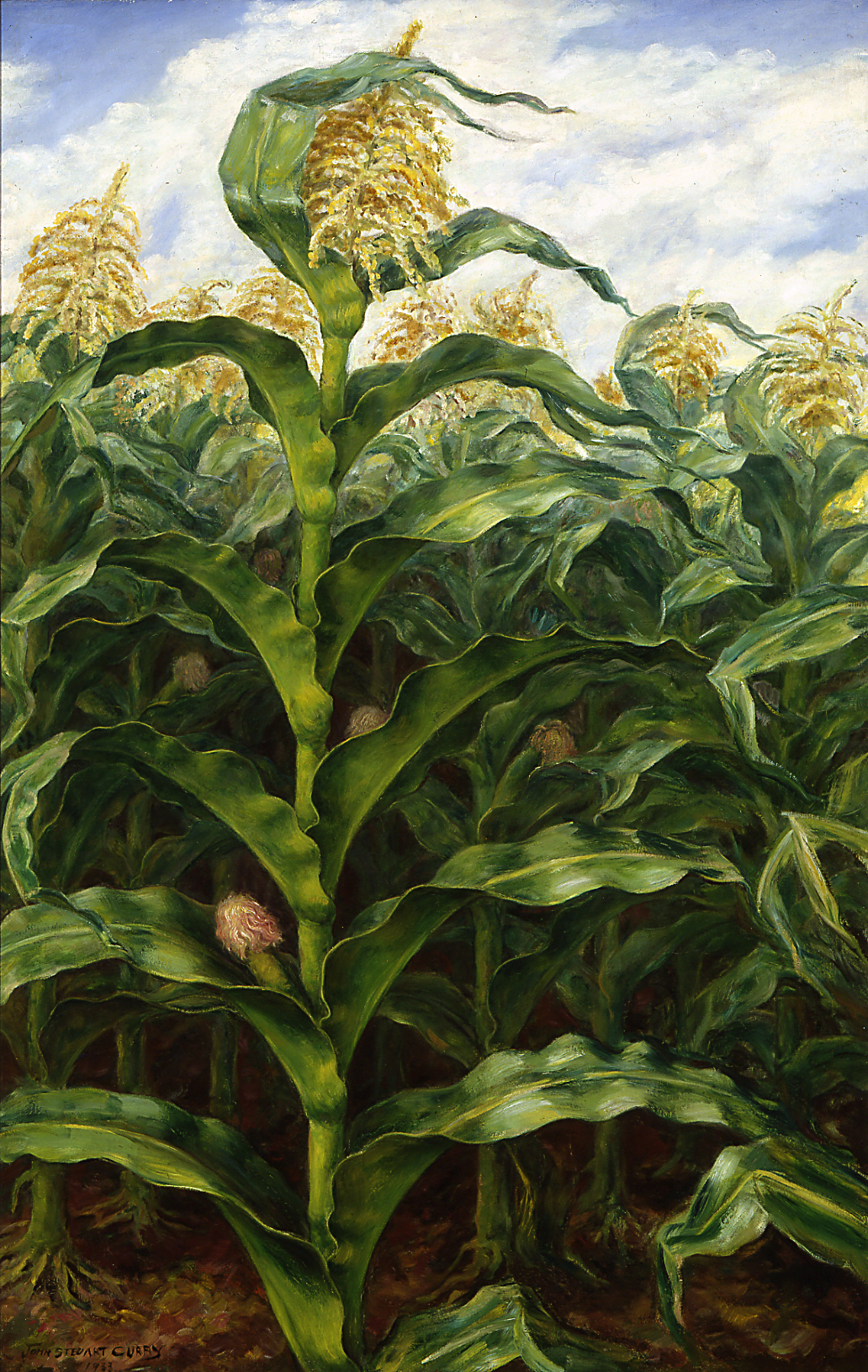 John Steuart Curry was born in the small northeastern Kansas town of Dunavant in 1897. As a teenager he developed an interest in art and left high school and the family farm to attend the Kansas City Art Institute. He moved on to the Art Institute of Chicago and then to a career as a successful illustrator for various publications, including the Saturday Evening Post. Curry aspired to become an independent artist but felt that he lacked the proper advanced training. In 1927 he traveled to Europe, where he was exposed to a variety of modern techniques and aesthetic theories, including Fauvism, Cubism, and Futurism. Curry rejected the modernists’ tendencies toward abstraction and instead developed a more straightforward representational style in which he rendered images of Midwestern life.

During the early 1930s Curry became associated with other artists who had similar painting philosophies, most notably Thomas Hart Benton and Grant Wood. These three men comprised the heart of the Regionalist movement. The Regionalists were committed to creating scenes of their immediate surroundings, often in a search for inspiring images during the bleakest days of the Great Depression.

Kansas Cornfield is one such inspiring image. Though Curry painted it from studies of his father’s fields, it is immediately apparent that this is not a simple image of typical Kansas corn. In addition to celebrating the fecundity of his native soil, Curry seems to suggest that the land has an inherent strength and dignity. The size and vertical format of the painting impart to the corn a feeling of monumentality. The stalks tower above the ground and seem capable of surrounding the viewer. They appear to possess power, even intelligence. Curry said, “I have tried to put into this painting the drama that I feel in the presence of a luxuriant cornfield beneath our wind-blown Kansas skies. As a child they held the same fascination for me as do the forests for those who live within them. I remember wandering through them and being overpowered by the fear of being lost in their green confines.”1

In 1939 Kansas Cornfield was the first purchase made by Elizabeth S. Navas for the Roland P. Murdock Collection. At approximately the same time, Curry was finishing his work on the murals at the Kansas State Capitol in Topeka. Kansas Cornfield was to be the subject of a mural intended for the capitol rotunda that, due to the controversial reception of the earlier stages of the project, was unfortunately never completed.2

From 1936 until his death in 1946 Curry worked and taught at the Agricultural College of the University of Wisconsin as the nation’s first university artist-in-residence. Though Curry was immensely popular at the time of his death, his reputation, like that of other Regionalists, went into decline with the rise of Abstract Expressionism in the later 1940s. Today, over fifty years later, Curry is once again recognized for creating the powerful images of the Midwest that had been a source of inspiration to him throughout his life.