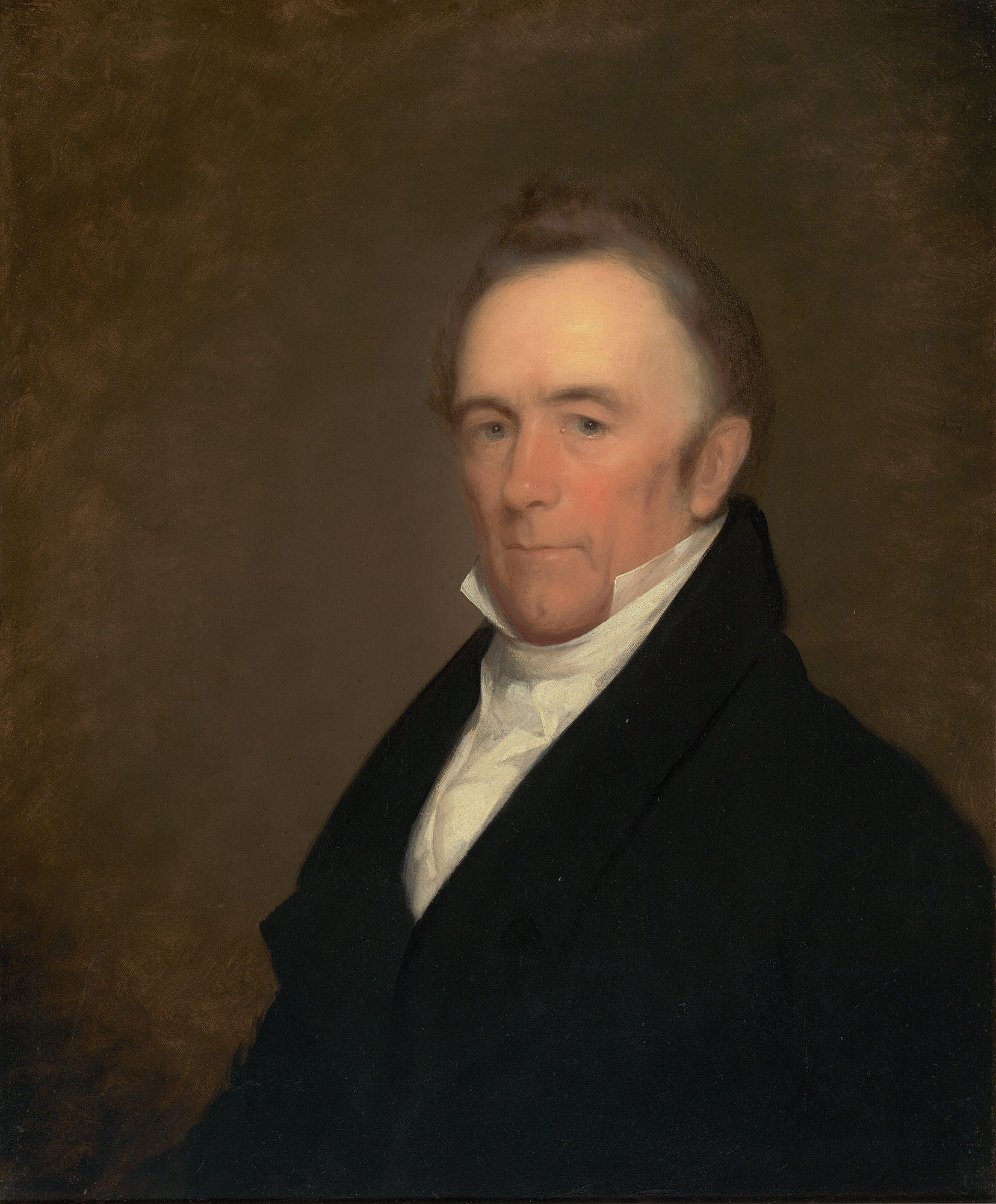 The artist, Chester Harding, was a curious mixture of a bluff frontier personality and an astute artist who understood his limitations and exploited his assets. Born in Massachusetts, raised in poverty in upper New York state, he learned to survive on what was then the frontier, helping out by making chairs. When he was 20, he enlisted as a drummer boy in the War of 1812. He survived a serious illness and began an independent adult life. Starting as a house painter, he graduated to sign-painting and eventually to crude portraits. Settling near his brother in Paris, Kentucky he (with a guilty conscience at the price) announced himself ready to paint portraits at $25 each. Successful from the first, Harding was able to visit Philadelphia where Thomas Sully was painting elegant portraits in the fashionable English mode. Unperturbed, Harding went also to Saint Louis and spent, what would have been to Sully, a laughable amount of time in the backwoods tracking down the aging Daniel Boone and persuading him to sit for him. This portrait, now in Boston, gives an early indication of Harding’s innocent but sympathetic style.

The fall of 1823 he went to Boston itself to meet Gilbert Stuart, who from his return to this country in 1793, had dominated American portraiture. Yet Stuart, who over-indulged in many ways, was beset with the debilitating effects of his manner of living and was eclipsed by this tall good-natured frontiersman who worked so fast and so openly. It was a fortunate time for Harding as his other great rival in Philadelphia, Charles Wilson Peale, was also nearing the end of his career. Harding was a new arrival, and astute enough to paint well and maintain his hard won back-country mannerisms which made him the darling of Beacon Hill. Stuart himself is supposed to have grumbled, “How rages the Harding fever?”; this when his own powers were never more acute, and although summoned less often.

When Harding painted “French John Gray” as his family called him to this day, to distinguish him from domestic relatives also called John Gray, during his first stay in Boston, isn’t yet certain. In the fall of 1823 Harding sailed for Liverpool and worked successfully in London and Paris, where he could also have painted French John Gray, as the sitter, a successful wine merchant, spent all his adult life abroad in Paris. Harding returned to Boston in 1826 and then in 1832 settled in Springfield, Massachusetts. Judging by the costume of the sitter, the portrait must have been executed between 1822 and 1830.