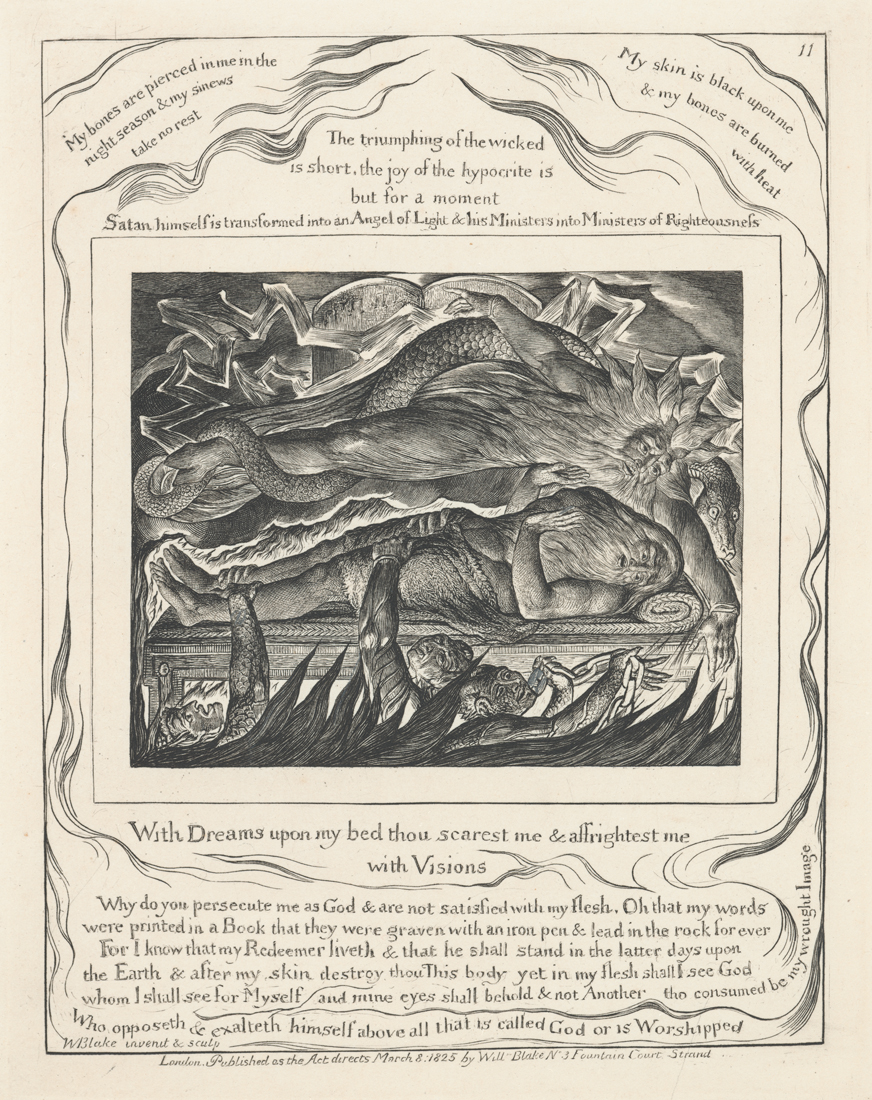 “With Dreams upon my bed thou scarest me & affrightest me with Visions”, plate 11 of 22 from The Illustrations of the Book of Job

Inscribed on the title plate: Invented and Engraved by William Blake/1825

William Blake was a mystic, poet, painter, and engraver. Regarded by historians as a genius of the English Romantic movement, he exercised enormous influence upon the artistic avant-garde in England and the United States in the late 19th and early 20th centuries. The masterpiece of his late career, the Illustrations of the Book of Job, represented the culmination of Blake’s life-long concern with an individualistic, mystical Christianity as well as a triumphant revitalization of engraving, a craft that in his day had fallen into disuse as a creative medium and was employed primarily for copy work. Blake’s independence of mind and proto-modernist innovations such as the incorporation of handwritten text into the overall image design insure his continued appeal.

Blake developed his unique pictorial vocabulary of symbols from a study of the Bible, the poetry of John Milton, and the writings of philosopher and mystic Emmanuel Swendenborg. Blake rejected the imitation of nature as a mechanical exercise and claimed imagination as the foundation of art. He developed his signature figurative style from the examples of German Renaissance artist Albrecht Durer, and the Italian Renaissance masters Michelangelo, Raphael, and Giulio Romano—artists whose imagery he knew only second-hand from the engraved copies rendered by mannerist stylist Marcantonio Raimondi. The ornate linear character of Blake’s sources encouraged his innate feel for decorative curvilinear form, elongated proportions, and acrobatic figurative poses and gestures.

As Plate XI demonstrates, Blake used the deceptively simple means of line engraving to achieve a striking richness of black tone, electric contrasts of dark and light, and strong elastic contours that seem to palpitate with barely contained tension. In this image he depicted Job pressed down to the very edge of Hell by the deadly weight of the saint’s own destructive misconception of God. Investing the prosaic engraving technique of cross-hatching with prickly immediacy, Blake conjured up such diverse torments as scaly flesh, horse-hair loin cloths, cloven hooves, flame-blackened shin, and muscles strained to bursting. Blake made Job’s realization of his own misguided understanding of faith the visual turning point of the narrative. Intensifying and compressing the patterning of zigzag and serpentine movement introduced in earlier plates, the artist brought the emotive tenor of fear and passion to a cathartic crescendo. From then on Job and the mood of the imagery begin to move toward harmonic equilibrium.