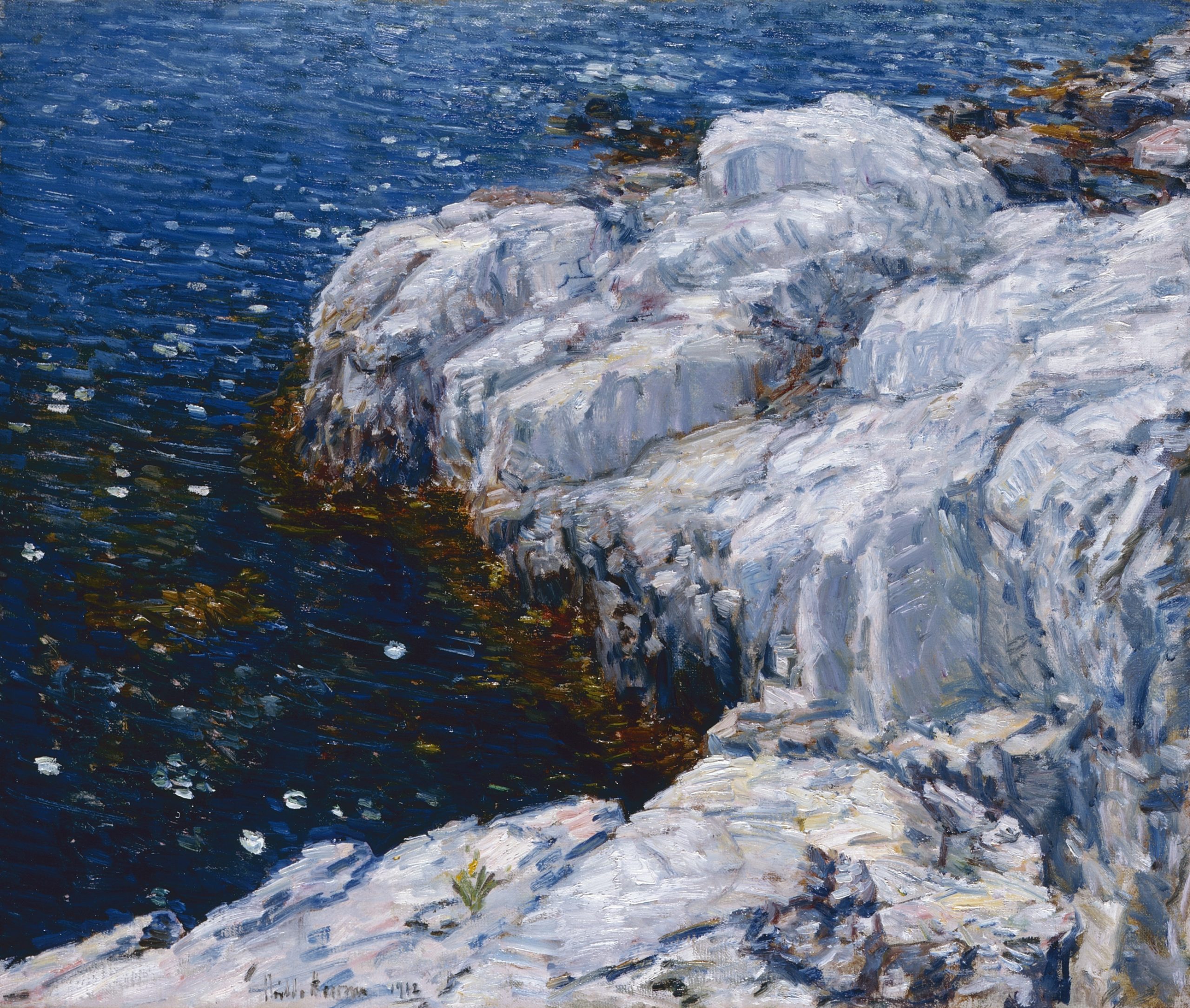 New England poet and journalist Celia Thaxter (1835-1894) first became acquaint­ed with Childe Hassam around 1884, when she briefly studied painting under him in Boston. In addition to her books of poetry and prose, well-known among Victorian New England literati, Thaxter and her family owned Appledore House, on the Isles of Shoals off the coasts of Maine and New Hampshire, where artists, writers, and musicians spent summers amidst the rocky ter­rain and in Thaxter’s celebrated flower garden. Soon after meeting Thaxter, Hassam and his wife, Maud, began spending summers at the resort. Hassam found Thaxter’s pantheistic odes to the island and her graceful, quick-witted presence as fascinating as she had found his lyrical Impressionist paintings, and the two became very close friends. Although twenty-four years older than Hassam, Thaxter became the artist s muse; her painterly poems and lush gardens inspired Hassam to paint radiant studies of Thaxter—charming in her parlor and contemplative in her garden—as well as to illustrate many of her writings. His most famous efforts in this genre were his watercolors of Appledore flora for Thaxter’s book, An Island Garden (1894). Hassam’s inspiration at the Isles of Shoals did not stop, however, at the gates of Appledore House. The artist spent nearly every summer from 1886 to 1916 painting the majestic lighthouses, shimmering sea sunsets and delicate wildflowers of the islands, creating a series that many critics consider the most personal and reveal­ing of the changing aesthetic concerns of Hassam’s career.

After Thaxter’s death in 1894, Hassam’s focus on the Isles of Shoals turned from the gentle depic­tions of fragrant flower patches and sunlit Appledore interiors to the harsh waves and impos­ing granite coasts of the islands. As if in mourning for his dear friend, he began depicting the melan­choly, even cruel nature of the weather-beaten ter­rain. His post-1895 paintings of the region seemed to reflect Thaxter’s account of Appledore s rocky foundations in Among the Isles of Shoals:”… very sad they look, stern, bleak and uncompromising, yet they are enchanted islands.”1

Painted in 1912, Jelly Fish presents the viewer with the sublime contradictions that seemed to endear the Isles of Shoals to both the painter and his muse. Craggy white rocks seem to rise like an impenetrable force from the impossibly dense, elec­tric blue waters painted in thick, cropped strokes. However, even the fierce stone foundation cannot keep the luminosity of life away from its intimidat­ing form. A single yellow flower pokes its way through the rock, defying the barren aspect of the rocky coast. And fluttering magically in the sea water, a shoal of jellyfish flock around the islands whose name is taken from their very formation. Hassam’s Jelly Fish seems to be a bittersweet paean to both the inspiration Celia Thaxter gave him on the island, and an illustration for a breathtaking passage from Thaxter’s Among the Isles of Shoals?

Sometimes in a pool of crystal water one comes upon (a baby sculpin) unawares—a fairy creature, the color of a blush-rose, striped and freaked and pied with silver and gleaming green, hanging in the almost invisible water as a bird in the air.3