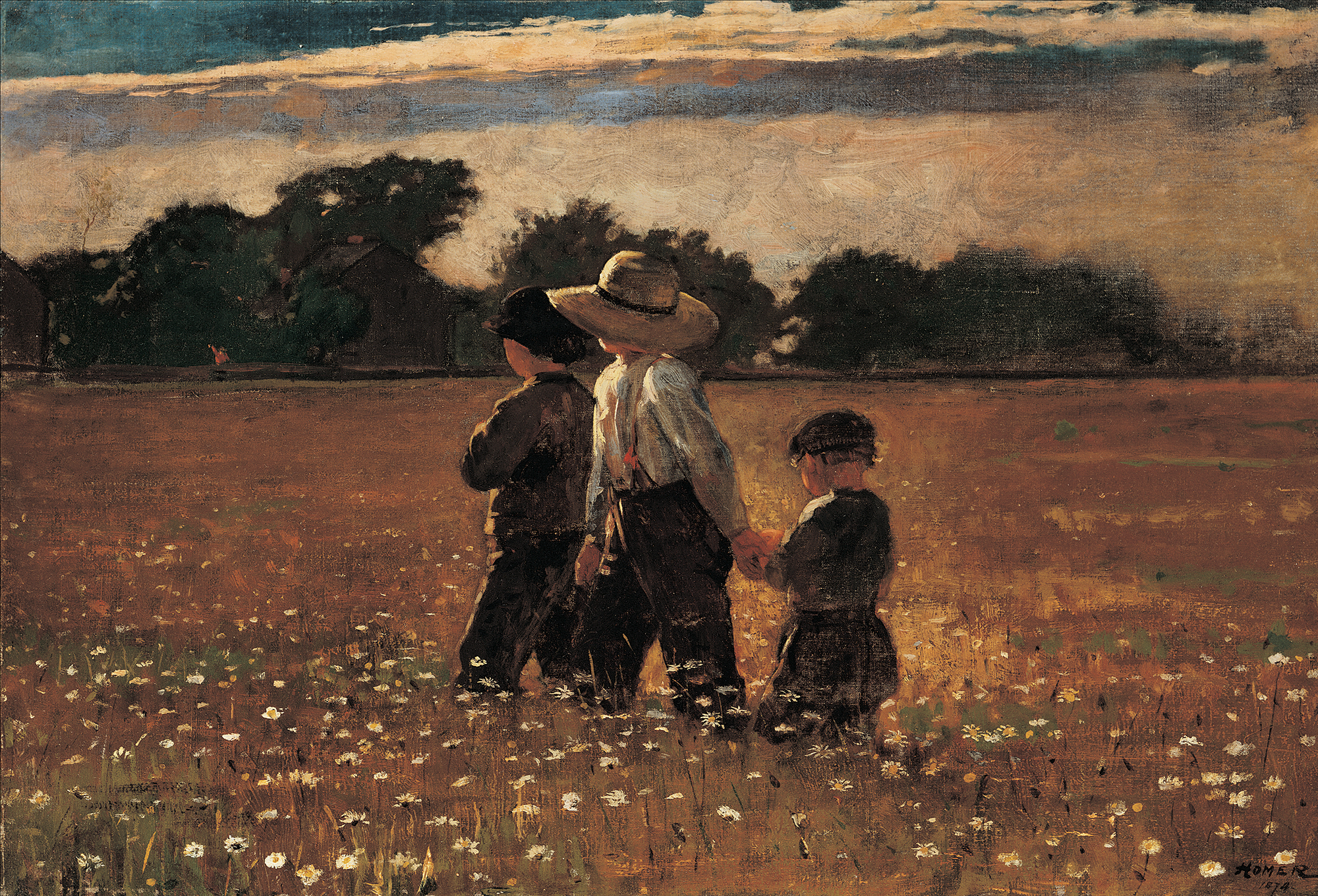 Knee-deep in a meadow sprinkled with daisies, three boys stop and turn towards their father who is calling them home. The sun is setting, and it is time for supper; an afternoon filled with childhood games has come to an end. The three are presumably brothers, and the youngest clutches his older brother’s hand so as not to trip in the tall grass. Silhouetted against the landscape, they assume a heroic presence that is a timeless expression of brotherhood.

Representations of childhood, particularly images of school children and farm youths, frequently appear in Winslow Homers paintings of the 1870s. In the Mowing could be interpreted as one of the most personal of this genre, as it seems based on a memory from the artist’s own youth. Homer was the second of three male children. His older brother, Charles, was two when Winslow was born; his younger brother, Arthur, was born five years later. The gaps in age between the Homer boys correspond with the ages of the three youths presented in the painting, and it is easy to imagine them as the three Homer boys returning home.

The idyllic spirit of simple childhood experi­ence seems rooted in Homer’s early days in rural Cambridge, Massachusetts. Winslow was six when his family moved to Cambridge, which was at the time a suburban village bordered by rural land­scape. The Homer boys loved the country and seized every opportunity to play and explore in the countryside surrounding their town. In an early article on Homer, George William Sheldon described the artists boyhood in Cambridge. “He has a great liking for country life—a liking which he thinks had its origin in the meadows, ponds, fishing, and beautiful surroundings of that subur­ban place. To this day there is no recreation that Mr. Homer prefers to an excursion into the coun­try.”1

When Homer was nineteen, he left Cambridge to apprentice at a Boston lithography firm. Homer thus began his career as an illustrator, working most notably for Harper’s Weekly in New York. During the Civil War, Homer did many illustra­tions of soldiers and their activities for Harper’s and worked up several of these sketches into paint­ings. Later in the 1860s, Homer began to depict in both graphic media and oils subjects such as vaca­tioners and croquet players. Concurrently, Homer also began to paint pictures of country children doing chores, attending school, and playing games. In the Mowing is an example of this genre.

Although much loved today, Homers rural scenes did not please every member of his contem­porary audience. Even the most severe critics, how­ever, admitted the appeal of these paintings. As Henry James observed in 1875:

“We frankly confess that we detest his subjects—his barren plank fences, his glaring, bald blue skies, his big, dreary, vacant lot of meadows, his freckled straight-haired Yankee urchins…He has chosen the least pictorial features of the least pictorial range of scenery and civilization; he has resolutely treated them as if they were pictorial, as if they were every inch as good as Capri or Tangiers; and to reward his audacity, he has incontestably suc­ceeded.”2

In the Mowing exemplifies the type of picture that James describes, and it too rises above its seemingly humble subject. It is an image ablaze with color and light, that is at once personal and universal. While the image is likely rooted in a memory specific to Homer, it is capable of tran­scending particulars to become a nostalgic medita­tion on childhood.