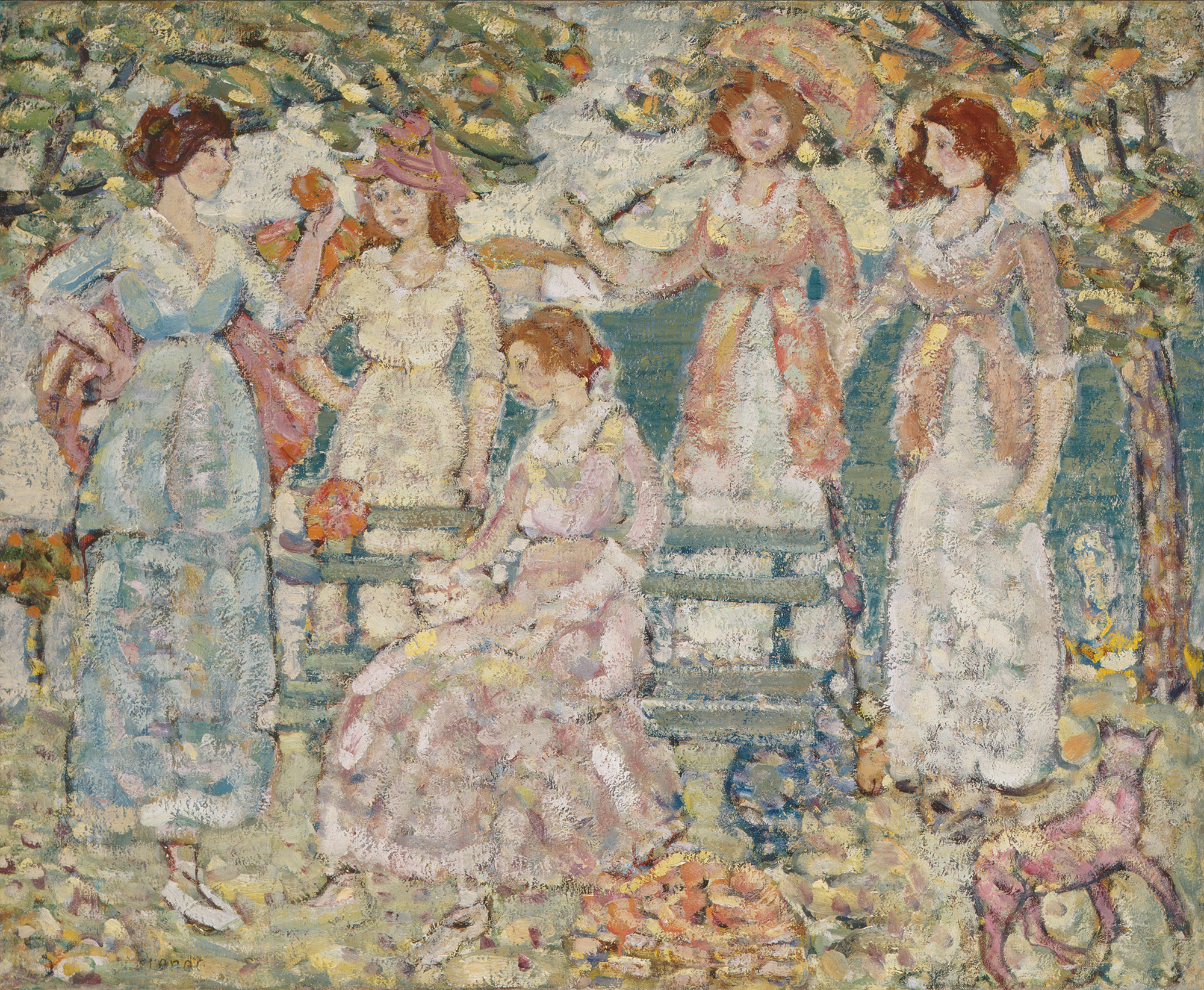 In the years following the Armory Show, Prendergast moved from depictions of contem­porary leisure like As Ships Go Sailing By to renditions of mythical subjects. These paintings, featuring large female figures and animals situated within wooden groves and parks, often alluded to classical sources, while simultaneously recalling slightly earlier prototypes like Auguste Renoir’s voluptuous bathers and Arthur B. Davies’s lyrical dancers. Prendergast eventually combined the clas­sical muses and allegorical swans of these post-Armory Show works with his earlier leisure scenes. In the works like The Holiday that followed Prendergast s integration of these two distinct sub­jects, the artist transformed the classical figures into contemporary women, and transported them from imagined, exotic locales to modern seaside parks.

The Holiday no longer depicts classical god­desses, but modern women clothed in summer fin­ery, who have gathered at a park bench, accompa­nied by a small domestic animal that has replaced the allegorical beasts of the earlier paintings. Even though The Holiday replaces mythological attrib­utes with contemporary motifs, the painting retains an idyllic quality. The static depiction of the figures and the solitude of their location convey a feeling of tranquility, reinforced by the suggestion of leisure in the title. The figure on the left prepares to bite into an apple taken from the tree above her, possibly a reference to paradise and the Garden of Eden.

Prendergast ordered the forms of The Holiday through conventions of composition and color common to his paintings of this period. For exam­ple, he placed the figures in a circular arrangement, continually returning the viewers attention to the immediate area of the park bench. In addition, the figures and trees provide a vertical counterpoint to the strong horizontal slats of the park bench and the body of water in the background. Prendergast’s use of color emphasizes the figures as well. The pastels of the dresses and parasols contrast with the deeper greens and blues of the flora and water. Dark outlines separate the figures from the dense brocade of paint that might otherwise obscure their forms.

As with many of Prendergast’s late works, The Holiday remained in the artist’s studio after his death. The thick paint application and indetermi­nacy of several forms suggest that Prendergast may still have been working on this painting at the time of his death. The artist’s fondness for color har­monies led him to rework tirelessly a single canvas, often obscuring the original design. As Nancy Mowll Mathews has observed, “The late idyllic paintings, with their visible signs of Prendergast’s ceaseless attempt to improve his art, reveal an essential feature of Prendergast as an artist…. Even when he restricted himself to a single idyllic mes­sage of peace and harmony late in his life, he worked to improve the expression in each one even if it meant dispensing with what went on before.”1