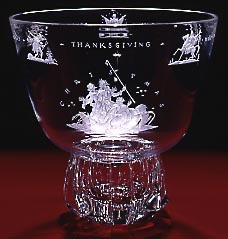 During the 1920s and ‘30s, Bruce Moore achieved international recognition for his sculptures of animals in bronze and clay. He was praised for his profound understanding of nature and for his vivid, yet quite stylized, representations of it. One of Moore’s old friends and colleagues was the sculptor Sidney Waugh, who had been appointed principal designer of Steuben in 1933. With the sharp acceleration in the number of commemorative designs issued by Steuben after World War II, Waugh searched for other artists to share some of the design responsibility. Moore replied that he was “delighted” to be asked to design for Steuben. The relationship, which began with Moore’s Tiger Bowl of 1950, lasted 20 years.

Steuben typically asked two artists to work together on the commemorative pieces. One, the designer of the vessel itself, was always a senior member of the Steuben design team. In the case of the Holiday Bowl, that designer was George Thompson. His vessel design consisted of two parts: a cut base that allowed the full prismatic brilliance of the glass to shine, and a plain, outward flaring bowl that allowed broad scope for the engraved design.

Moore’s Holiday Bowl features a central scene of the Three Wise Men gazing in wonder at the Star of Bethlehem. Before them kneels a camel. Around the upper circumference of the bowl is a frieze containing the names of five other holidays alternating with images that represent them. Washington’s Birthday is represented by the General on horseback and Roman symbols of authority that imply the nation’s autonomy. Memorial Day is represented by a laurel wreath and three stacked rifles. The Fourth of July is personified by a colonial figure holding the Declaration of Independence. Labor Day is represented by a muscular workman operating a pneumatic drill. Moore wrote that he added the skyscraper behind the workman to “indicate the monuments of his industry.” Finally, Thanksgiving is personified by a “Pilgrim returning from his hunt.”

The realization of the Holiday Bowl took a full year. It began on October 23, 1953 with a letter from the Steuben design department asking Moore if he were interested in designing the engraving for a bowl that would be symbolic of America’s holidays. Over the next few months Moore made trips to New York to coordinate his design with Thompson’s design for the vessel. Finally, on November 19, 1954 a Steuben official sent Moore photographs of the first finished bowl. The official included a note stating that she thought it was “really one of the most beautiful pieces of engraved glass that I know.”