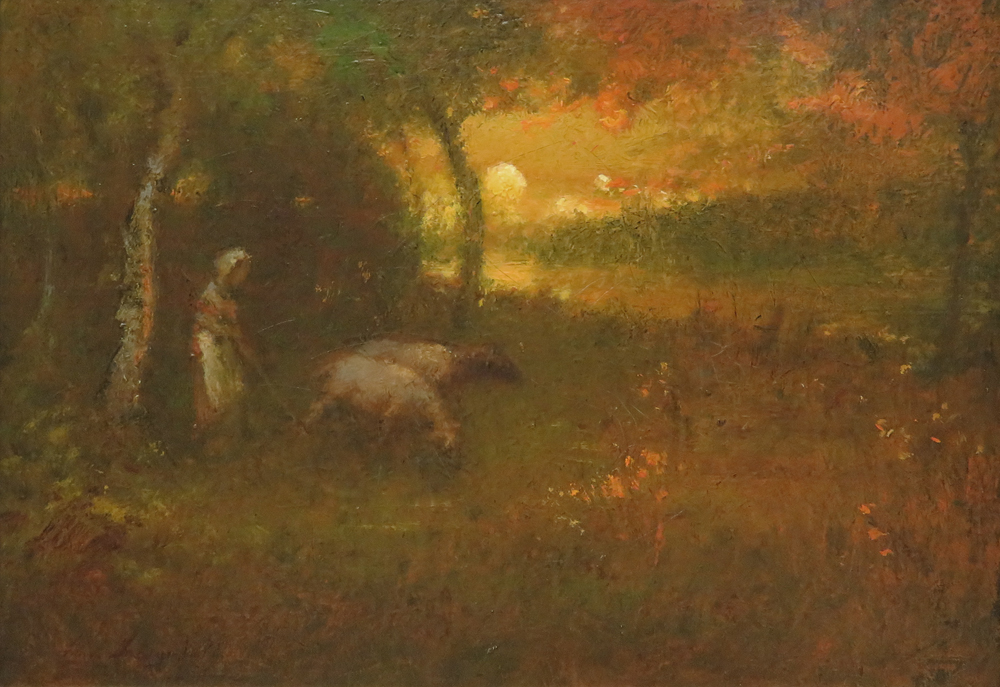 One of America’s most popular painters during the late 19th and early 20th centuries was Elliott Daingerfield. In his long and prolific career, he produced works in a wide variety of types and styles. Yet his best-known paintings were romantic landscapes that often evoke a melancholy mood and that are stylistically reminiscent of the painterly qualities characteristic of the French Barbizon artists of the period.

In this work titled Glowing Sunset executed by Daingerfield about 1920, a shepherdess and two sheep are seen in a rustic setting with a hazy sun sinking in the distance at the close of an early autumn day. Rich colors are employed throughout the composition and a lively surface is achieved by the employment of thick and sometimes swirling brushstrokes. A distinguishing feature is Daingerfield’s interest in developing misty, softened forms and in placing closely related color tones adjacent to one another throughout much of the com­position. And while all forms maintain their identity, they tend at the same time to merge within the encom­passing space. The overall impression becomes one of a fuzzy veil stretched across the surface of the canvas blurring the forms, which thus appear as though seen in a dream passing fleetingly in a brief instant of time. In­deed it is this poetic, dream-like effect rather than the theme of a shepherdess, which is actually the dominant subject of this painting.

Elliott Daingerfield was born in Harper’s Ferry, West Virginia in 1859. His youth was spent in Fayetteville, North Carolina where he studied with a porcelain painter and subsequently served as a photographer’s ap­prentice. In 1880, at the age of 21, he settled in New York City and studied at the Art Students League. Within a few years, he became closely associated with George Inness whose influence is strikingly evident in many of his landscapes including Glowing Sunset. Dain­gerfield was a noted author and critic as well as an art­ist and published the biography of George Inness and wrote critical accounts of other artists of the period, in­cluding Ralph Blakelock. His works are included in ma­jor museums and private collections throughout the na­tion. He was 73 years of age when he died in his studio in New York City in 1932.