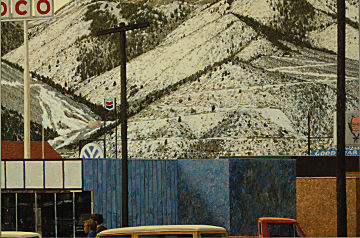 A winter sports resort area in Colorado is the setting for this oil painting titled Glenwood, executed in 1978 by the contemporary American artist Chuck Forsman. What is shown is a close-up view of distant snow-covered mountain slopes seen by looking over a broad horizontal parapet-like band of architectural forms in­cluding paneled walls and a store front together exten­ding across the entire width of the scene. Of especial in­terest are the spatial concepts in play and the sharp focus of all forms rendered. Of equal compositional significance are the familiar advertising signs shown — most offered in fragmentary form only — the snapshot-like manner by which the scene is presented, and the teasing uncertainty of what is actually taking place in the immediate, partially revealed foreground.

Muted colors are employed throughout. Yet a brisk vigor, echoing the lively mood of a resort town, is achieved by the thumb-size daubs of thick pigment ap­plied rather uniformly across the entire surface, thus creating a decorative tapestry-like quality and serving to emphasize the physical actuality of the surface itself. The surface is further strengthened by the dominant ver­ticals and horizontals in the foreground. And although a sense of distant space is formally created by the zigzag roadways and long stretches of evergreen trees that define steep mountain slopes of the background, sharp-focus detail is not diminished with the distance suggested. As a result, all forms tend to cling to the sur­face, thereby further imparting a flat, two-dimensional quality to the composition as a whole. Yet, while the eye dwells on the surface it is at the same time drawn into the distance, experiencing visual tension and in turn a marked degree of ambiguity.

But ambiguity is a reality of existence and is skillfully and deliberately introduced into this painting as an effective device for engaging attention and inviting active participation on the part of the viewer. Such ambiguity is further experienced by virtue of the incomplete identity and uncertain arrangement of forms in the immediate foreground. Moreover our own space is pulled into the composition by the reflections that we see in the glass store window at the lower left and by the fact that, like a close-up snapshot, the scene is deliberately chopped-off along all sides, thus creating a dynamic interplay be­tween the viewer’s space and that of the picture. Indeed, the entire scene is a cutout, a kind of suspended segment of familiar space containing fragments of commonplace objects and familiar banal images. But though the fragmentation of these images momentarily introduces uncertainty in interpretation, interest cannot be dis­missed, for appropriate cues are supplied which stimulate our recall and our own creative impulses, forc­ing us to complete the meanings and thus to participate actively in the life of the painting.

Chuck Forsman is undoubtedly one of the most promising young realists in America today. He was born in Nampa, Idaho in 1944 and studied at Skowhegan School of Painting and Sculpture, Skowhegan, Maine, and at the University of California in Davis where he received the Master of Fine Arts degree in 1971. Since then, he has been a member of the Art teaching faculty of the University of Colorado. Forsman has held numerous solo exhibitions and has participated in many group shows. His works are included in major public and corporate collections throughout the country.