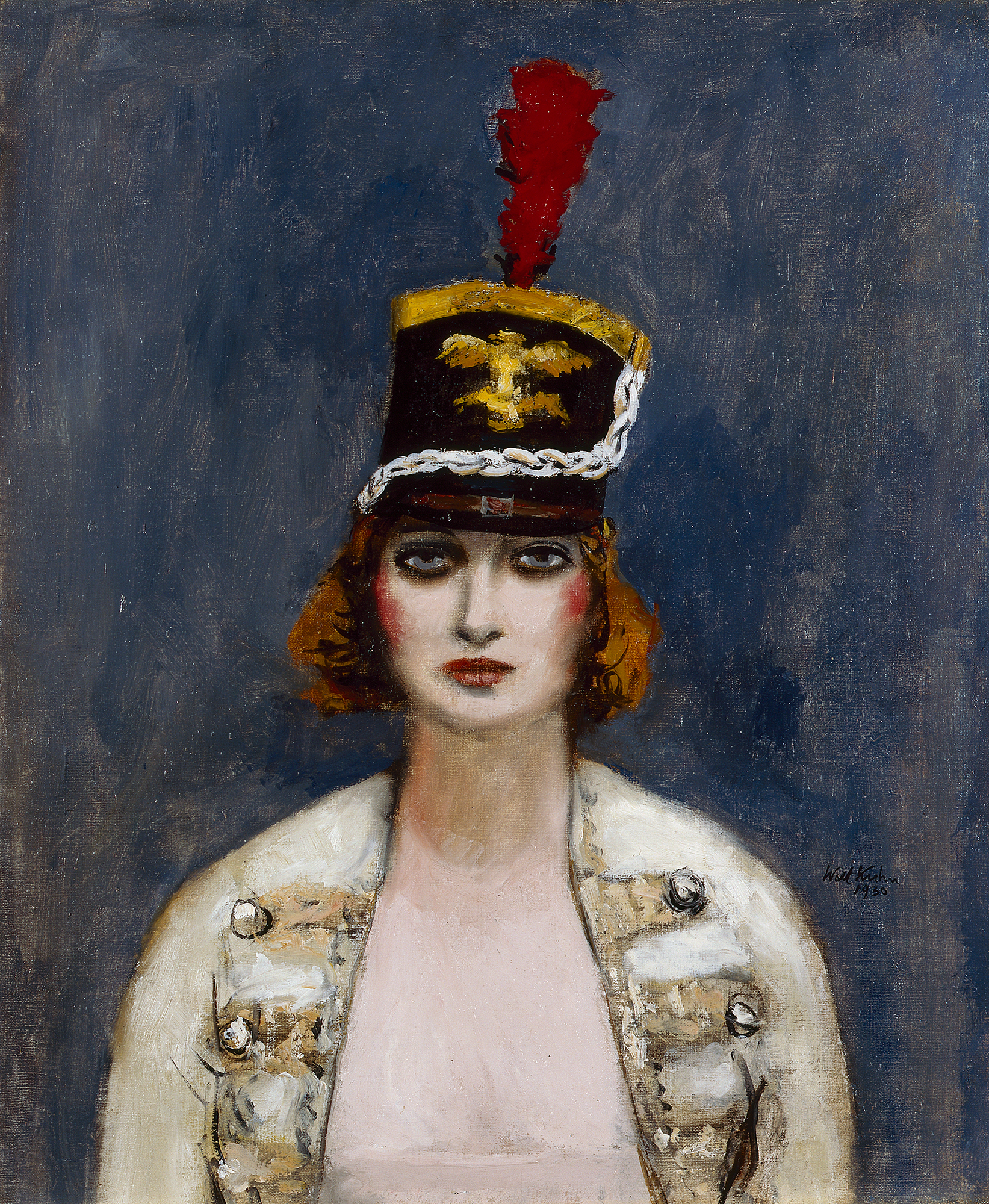 Walt Kuhn left his native Brooklyn in 1901 to pursue a European artistic training in Paris and Munich. Two years later he returned to New York, where he financed his painting career by drawing cartoons for various magazines and newspapers. A founding member of the Association of American Painters and Sculptors, Kuhn was instrumental in the group s organization of the groundbreaking Armory Show of 1913. He spent the following years absorbing the shows modernist lessons, with particular attention to the works of the Post-Impressionists and Fauves. By the early 1920s, however, Kuhn had begun to employ simple colors and spare compositions in a frankly representation­al style that would for the rest of his career charac­terize his still lifes and landscapes, in addition to his trademark circus and show-business subjects.

Girl in Shako of 1930 is a typical Kuhn por­trayal of a female stage performer. The artist cap­tures the exaggerated color contrasts of the stage in the woman’s bright make-up and in the gold trim and crimson plume of her shako, all of which stand in garish opposition to the cooler whites and blues of the figure and background. In the follow­ing years, Kuhn continued to experiment with a palette that employed the colors of show business. He wrote in 1935 about his use of “arbitrary color,” the artists own term for the deliberate pur­suit of the gaudy look of the stage.1

The iconic, frontal pose and deadpan expres­sion lend to the subject an eerie presence. Rejecting the traditional conventions of portrai­ture, Kuhn saw his sitter less as a unique individual than as a means toward a pictorial end. “Each painting,” wrote his wife, Vera: was a specific problem, sometimes tossed about in his mind for a year or more. During this time, before actual painting began, the idea became more simplified and clarified. The costume for a specific idea was often on hand, complete, before the model was picked. It was a matter of having the right girl or man for that particular idea appear at the studio.2

Girl in Shako is one of many paintings in which Kuhn posed female performers in shakos he designed and made himself. In contrast to his unfailingly sensitive treat­ment of male performers, such as Acrobat in White and Silver, Kuhn’s females often appear generic and lifeless, functioning primarily as props for exotic costumes. While Kuhn’s attitude toward gender roles awaits further examination, the artists own statement that his “paintings are intended for men and for virile women”3 suggests that maintaining a manly self-image was important to this painter.