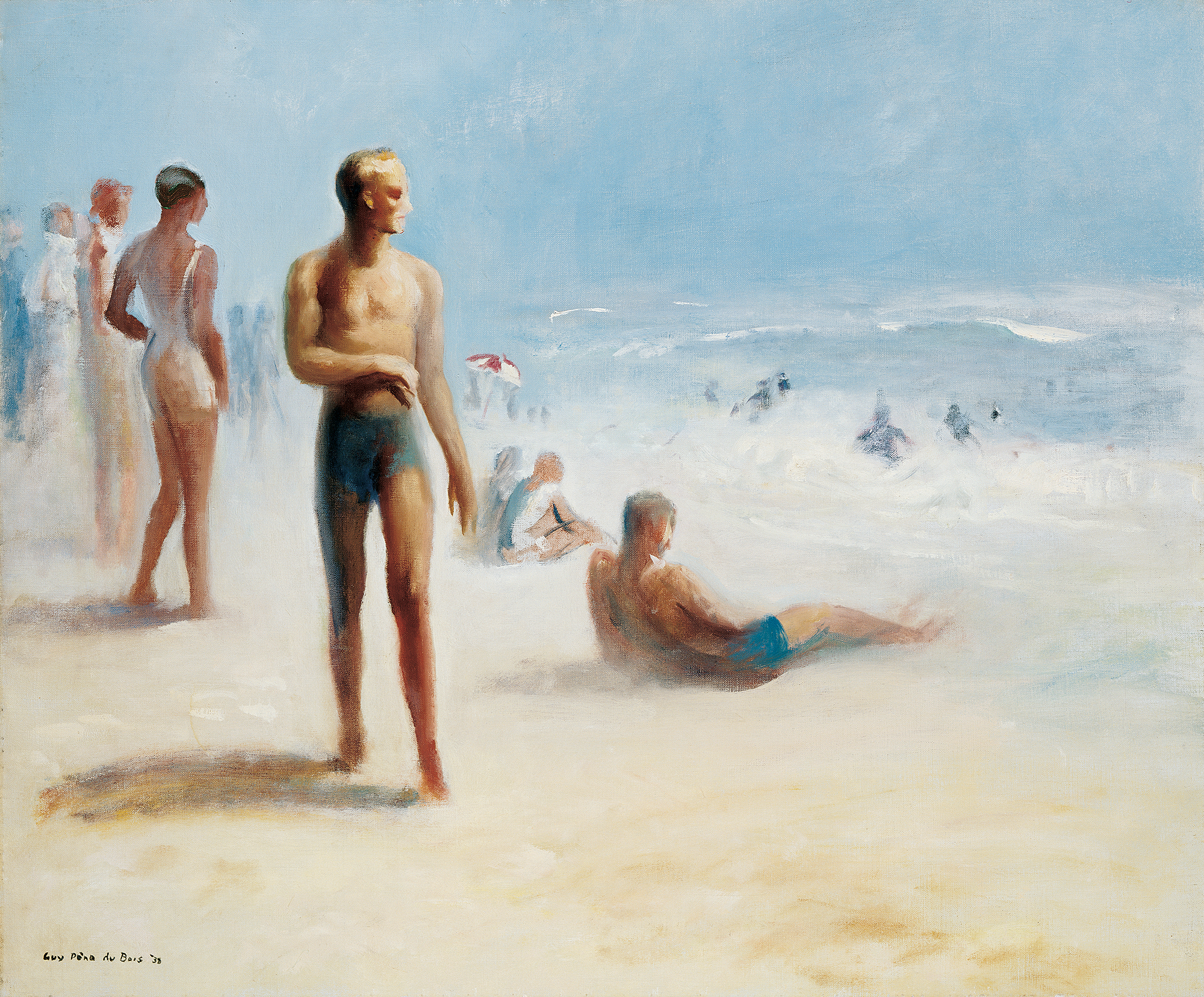 Guy Pène du Bois breathed a sense of suave familiarity into his observations of the entertainments and pastimes of modern life. Although at first glance the artist might have appeared to be scanning only the most trivial of social glosses—manners and fashion—du Bois was engaged in a deft probing of the psyche of America’s haute monde. No other disciple of urban realist painter Robert Henri and the Henri imperative to make art from contemporary life turned his brush to the foibles and yearnings of the leisured class, or realized psychological motivation underneath appearances, high or low, as effectively as did Guy Pène du Bois.

In place of the somber tones and atmosphere of world-weariness that dominate the majority of du Bois’s images, Fog, Amagansett exhibits a high key pastel palette. Light blue and yellow-white tints suffuse this prospect of an exclusive resort beach with light, warmth, and exhilaration. The painter’s summary mode of object definition, laying down the figures of various bathers with a few quick brushstrokes, not only enhanced the physical airiness of the scene but also lent it an element of cavalier bravado.

Du Bois explained his attitude toward the humanity depicted in his paintings as one of amused sympathy; he said that people were only as ludicrous as the ideals to which they enslaved themselves.[1] Fog, Amagansett is one of those images in which the artist seems to have let the self-image of the rich speak for itself. The artist employed a sketchy, fluid rendering of both bodies and atmosphere to create a sense of solids dissolving into the airy haze of daydream, sum warming closed eye lids.

The slender elongated grace of the bathers in Fog, Amagansett, and their tapered limbs softly rounded and ruddy-blond with health, conjures a kind of Vogue-magazine-eugenics utopia. The scene’s mannequin-form protagonist, a male bather with a neat crown of blond hair glinting in the sun, walks with measured step toward the foreground. Yet Pиne du Bois admits no interaction with the viewers. The man, absorbed in his own being, glances toward the ocean, offering a profile of his inscrutable, bland beauty for delectation.

Guy Pène du Bois was an astute art critic as well as a talented painter. The way in which the warm humid atmosphere of Fog, Amagansett seems to dissolve all solid reality into an airy haze of daydream makes an equally strong case for du Bois’s skills as a social commentator.