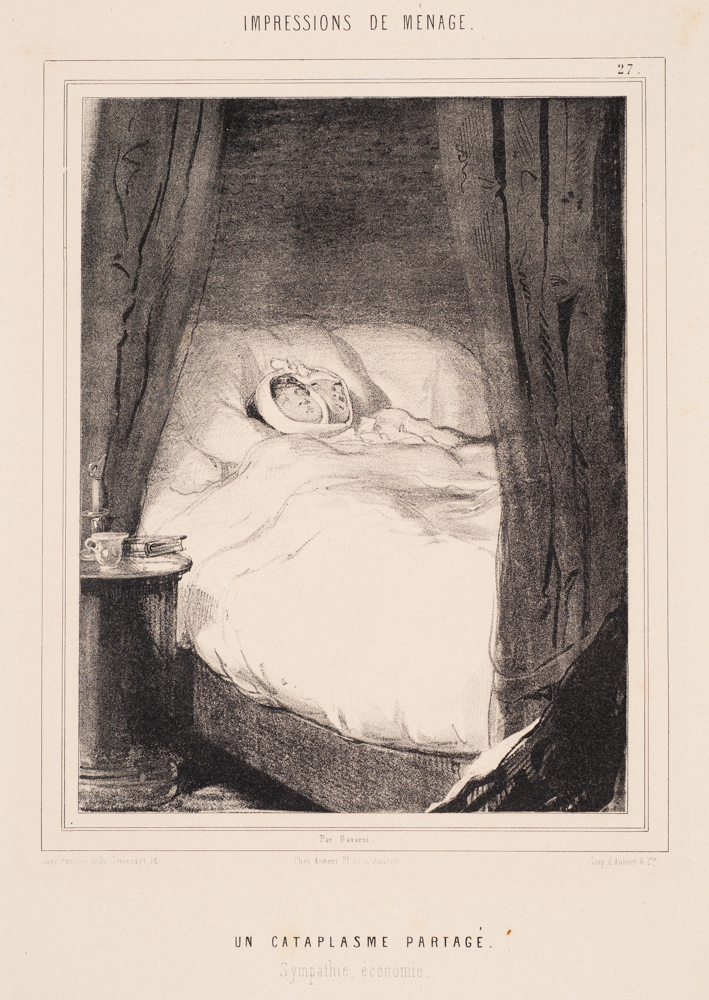 Gavarni started his artistic career in the late 1920s as a fashion designer and illustrator for the Parisian journal La Mode. During this time, he made the acquaintance of such popular literary figures as Victor Hugo, Balzac, Alexandre Dumas, Alfred de Musset, and Chateaubriand. Balzac encouraged Gavarni to do illustrations for the literary journals to which he and the others contributed. His ambition fired, Gavarni tried publishing his own journal, writing the text, and drawing the illustrations himself. This venture failed, however, and he was forced into debtor’s prison for several months. Undiscouraged by this experience, he returned to the task of portraying contemporary Parisian life.

Gavarni received an important opportunity in 1837 when the innovative publisher Charles Philipon asked him to provide illustrations for Le Charivari. This journal of entertainment, fashion, gossip, and humor was to become the most popular newspaper of Second Empire Paris. Gavarni worked for Charivari for approximately ten years, creating a rich pictorial vocabulary of the times and earning himself celebrity status in fashionable society.

Among his contemporaries Gavarni’s fame equaled and even surpassed that of Honorй Daumier. While the latter often addressed himself to serious moral and political questions, Gavarni devoted himself entirely to the frivolity of the Parisian scene. He portrayed the cafés, theatres, public balls, the activities of the boulevards, the bohemian life of the student, and the private lives of many different classes of Parisian women.

Woman was really Gavarni’s chief subject, the center of all his observations on manners, mores, and pastimes. His Parisian women, no matter what their class or profession, were all of one character – attractive, pleasure-seeking, cunning and never to be completely trusted by any rational male.

During the height of his fame, Gavarni led the life of a Dandy. After a morning at work he spent the rest of the day promenading on the boulevards, dining out, attending parties, the races, public balls, and all the other fashionable Parisian entertainments. Toward the end of his life, Gavarni’s fortunes changed. He had personal problems, his career declined, and his outlook soured. The last cartoon series, which he produced, voiced his disillusionment through the cynical views of aging prostitutes and derelicts. He gave up lithography altogether in 1857 and became a recluse, painting watercolors until his death in 1866.