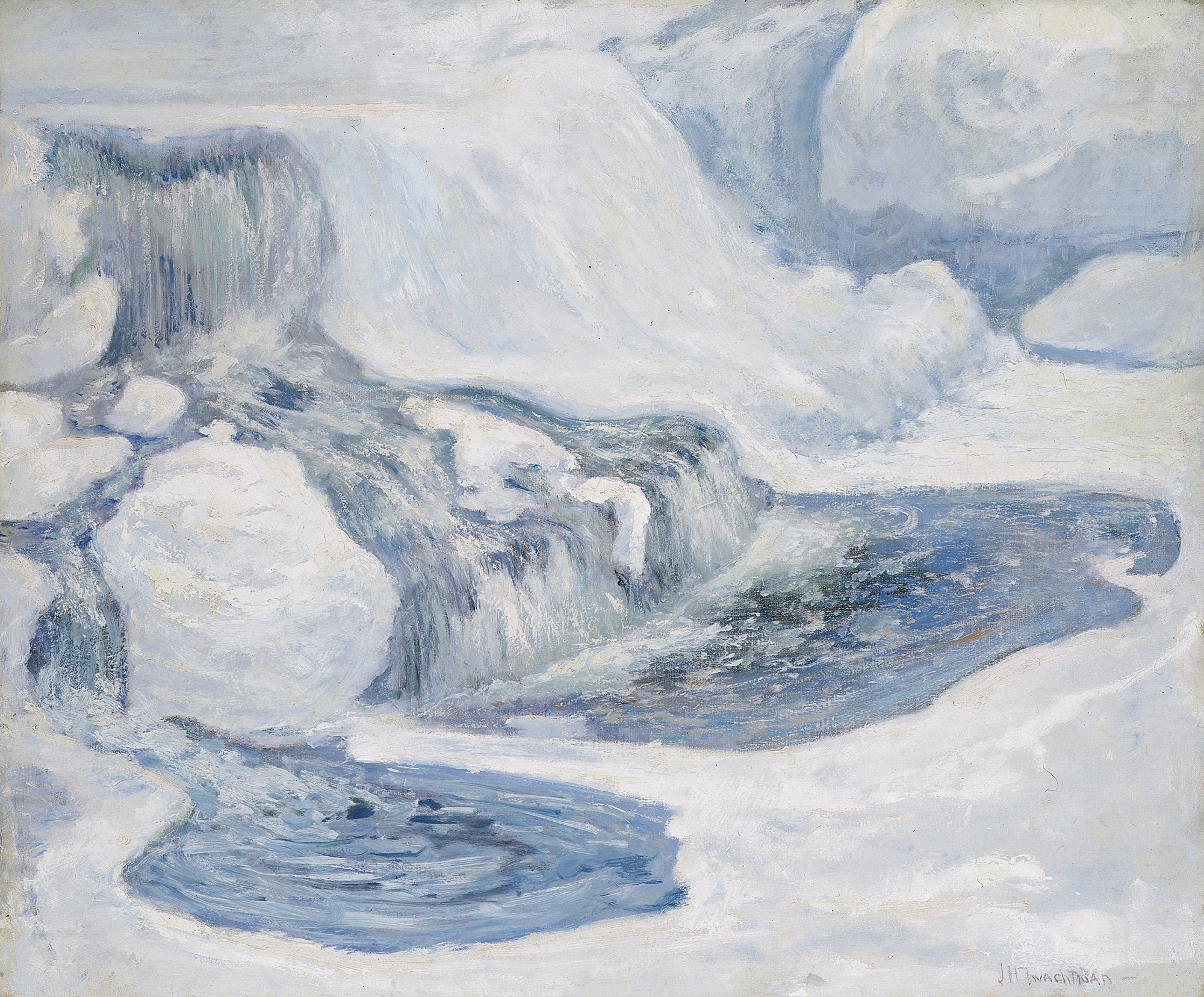 “Never is nature more lively than when it is snow­ing. Everything is so quiet and the whole earth seems wrapped in a mantle…. all nature is hushed to silence.1”

Written in 1891, John Twachtman’s words capture the mood he evokes visually in his many snow-scenes of rural Connecticut. Twachtman painted Falls in January at his farm in Greenwich, taking as his subject a small cascade in Horseneck Brook, a stream that flowed through the artist’s property and which he painted often, under a variety of sea­sonal conditions.

In Falls in January, thick impasto suggest an accumulation of snow and ice, while linear brush­strokes imitate falling and swirling water. But even as the brushwork suggests nature, its assertive phys­ical presence exposes Twachtman’s artifice. And even though we can almost hear the quiet trickle of a brook encased in snow and ice, we are also drawn to the paintings abstract design. The artist has focused so closely upon the waterfall that we find it difficult to establish a foothold within this natur­al scene; and so strongly are we attracted to the surface patterns that our eyes are constantly brought back to the flat plane of the canvas. The result is a tension between an illusion of nature in three dimensions and the two-dimensional patterns of the painting’s design. This tension is the hall­mark of Twachtman’s mature style.

Twachtman’s early works bear little stylistic resemblance to Falls in January. After a period of local art instruction in his hometown of Cincinnati, he enrolled at the Royal Academy of Fine Arts in Munich in 1875. Under the tutelage of Frank Duveneck, Twachtman adopted the vigor­ous brushwork and dark tones of the Munich school. During a period of study in Paris from 1883–85, he developed a more subtle handling of paint and a broader color range. On his return to America, Twachtman settled in Greenwich, Connecticut, where his style continued to evolve, becoming increasingly personal and abstract. While his reputation today rests primarily on his paint­ings, Twachtman was also an influential teacher and was instrumental in founding the group of American Impressionists and Tonalists known as “The Ten.”

Before his death at the age of forty-nine, Twachtman helped to bring a new intimacy to American landscape painting. His modest, evoca­tive canvases stand in marked contrast to the spec­tacular mountainous panoramas by painters of the previous generation such as Albert Bierstadt and Thomas Moran. Childe Hassam, an admirer of Twachtman’s genius for evoking the essence of nature through simple and unassuming means, praised the artist for painting “Truths well told, interestingly told, just as a few words well chosen will tell a truth that a thousand cannot!”2