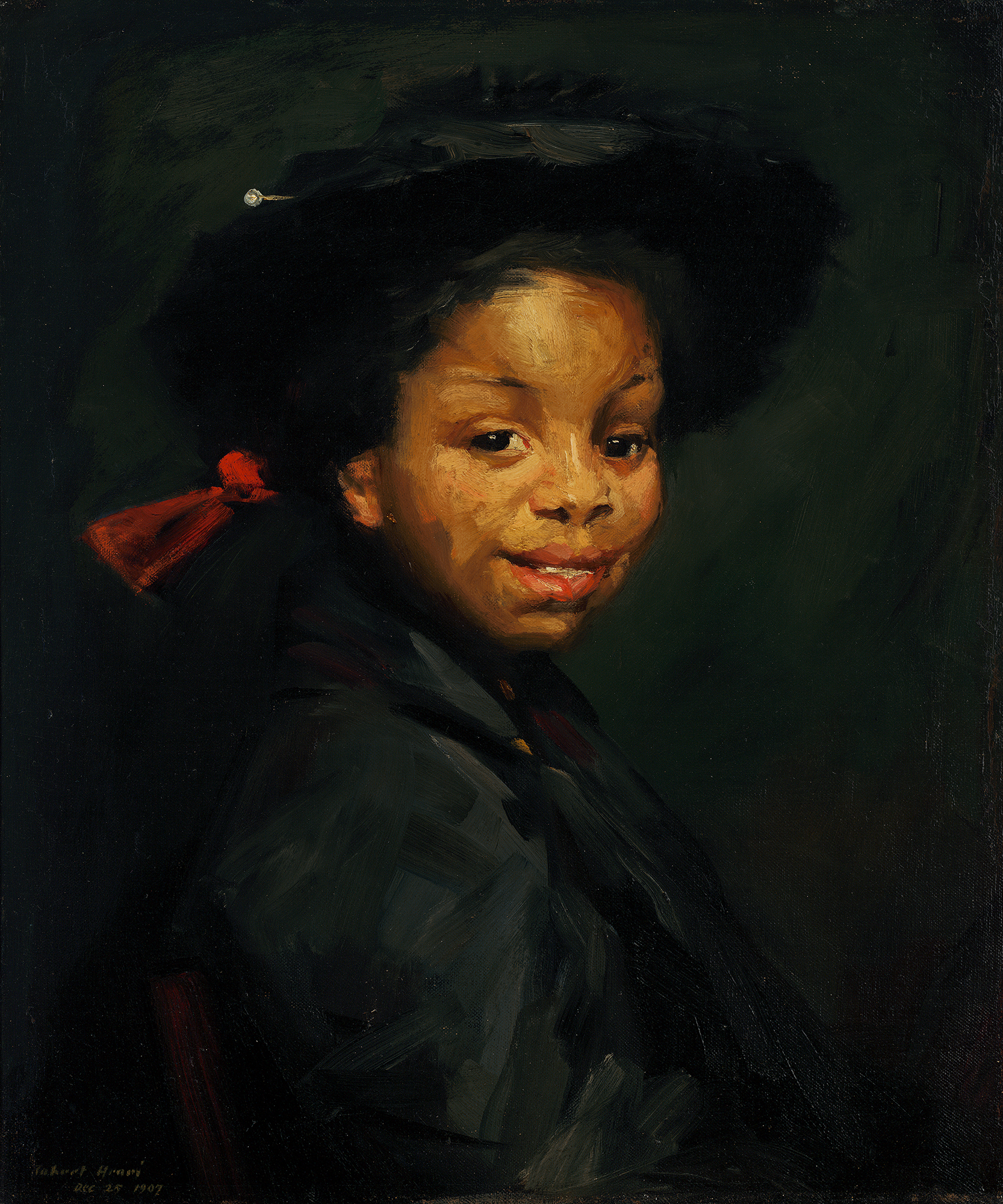 Robert Henri was born Robert Henry Cozad on 24 June 1865, in Cincinnati, Ohio. He spent much of his childhood in Cozad, Nebraska, a town founded by his father. In 1882, after Roberts father shot and killed a man, the Cozad family fled to the East Coast and changed their names in an attempt to disguise their true identities. In 1886 Henri enrolled in the Pennsylvania Academy of the Fine Arts, where he learned to draw by copying plaster casts of ancient statuary and studying the nude figure. Two years later he traveled to Paris, where he studied at the Academie Julian and the Ecole des Beaux-Arts and came under the influence of the Barbizon School and the Impressionists. Henri returned to Philadelphia in 1891 and taught there until 1895 when he returned to Paris. During this and subse­quent visits to Europe, Henri traveled widely and studied the works of Frans Hals, Velazquez, Goya, and Manet, which would greatly influence his maturing style.

In Philadelphia Henri became the artistic leader of a group that included John Sloan, Everett Shinn, William Glackens, and George Luks, all of them illustrators for the Philadelphia Press. Henri encouraged his students to apply their journalistic skills to the development of personal artistic styles that could capture the vitality of the modern world around them. Henri and his students all moved to New York City around 1900, where they began to paint the poor inhabitants and lower class neigh­borhoods of the inner city, earning for them the name of the Ashcan School. The Ashcan artists’ embrace of the everyday world of the American city and rejection of academic painting traditions alienated them from the leading art societies of the day. Henri struggled to gain exposure for his and the others’ art by organizing independent, non-juried exhibitions such as the famous exhibition of “The Eight” at the Macbeth Gallery in 1908 and the Exhibition of Independent Artists in 1910. Henri even participated, for a time, in the organi­zation of the landmark 1913 Armory Show, which introduced European modern art to the American public. In the aftermath of that exhibition, Henri’s influence declined: compared to modernist abstrac­tion, his commitment to realism seemed old-fash­ioned. He did, however, continue to teach and paint until his death in 1929.

After his move to New York, Henri dedicated himself primarily to portraiture. Eva Green is one of his finest portraits of children, whom he saw as embodiments of uncorrupted vitality. Painted on Christmas Day in 1907, this portrait was complet­ed after Henri returned from a trip to Holland. While there he had been deeply impressed by the works of Rembrandt and Frans Hals, whom he emulated by using broad brushstrokes, abundant pigment, earth tones, and dark backgrounds.1

Henri’s notes about Eva Green record a “tam-o-shanter hat…. Blue coat, blue ribbon showing and reddish ribbon sticking out from back of hair.”2 Not mentioned in the notes but quite significant is the fact that Eva Green is an African American child, depicted by Henri in an autonomous role usually reserved for white youths. Henri’s interest in representing people of different races was a manifestation of the deeply felt democ­ratic view of humanity that animated his portrait painting throughout his lifetime.