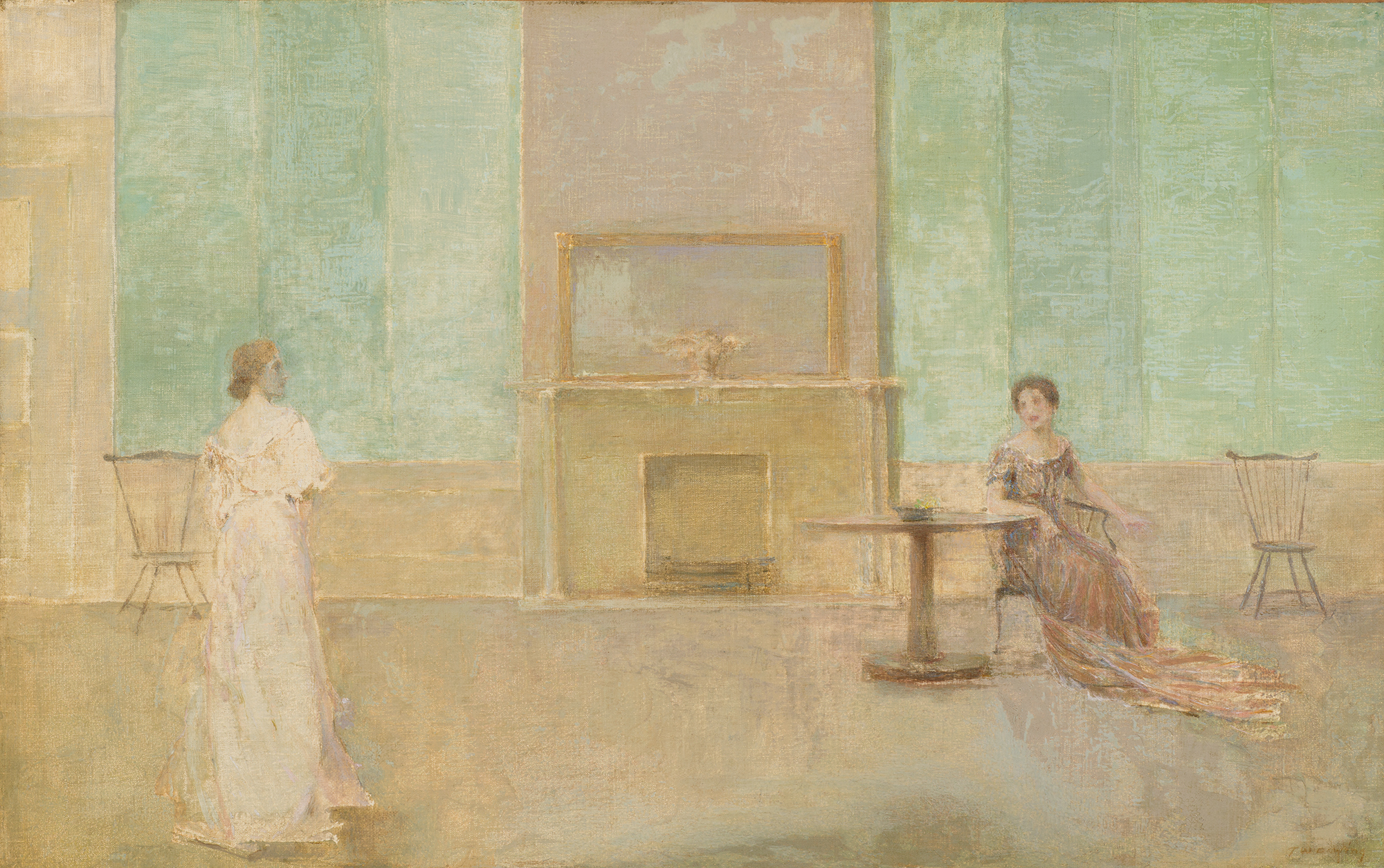 A mood of poetic calm and quiet enigma pervades the atmosphere of this refined oil on canvas titled Conver­sation by the American impressionist, Thomas W. Dew­ing. The work was painted quite probably soon after the turn of the century and in every sense is clearly a master­piece of understatement.

The setting is the interior of a spacious but sparsely furnished room. A flat multi-paneled wall serves as a backdrop extending across the full width of the com­position and is interrupted only by a centrally located fireplace and mantle over which hangs a large mirror. Two young women dominate the space of the room, one standing at the left and the other seated at a circular table to the right of center. The only other objects in view are a small winged head on the mantle and two small Windsor chairs, one near each end of the composition. Space is otherwise completely open and empty but alive, readily recalling the abstract spatial treatment so often found in 18th and 19th century Japanese prints.

The composition of this work is of much unusual in­terest for it is clearly a combination of symmetrical and asymmetrical concepts, the backdrop wall being essen­tially a symmetrically balanced design while the seem­ingly vast space of the room is entirely asymmetrically organized. Three carefully plotted spatial coordinate points — the standing woman at the left, the seated woman at the table near the center and the small chair at the far right — define a straight line which pierces the room diagonally and imparts an energetic charge to the space. Indeed, both the visual appeal and the emotive impact derive from the powerful relationship of the two opposing points of view, so effectively integrated here through the use of geometry as the instrument of disciplined control.

The subject of this work is only superficially iden­tified by the title Conversation, for the true thematic content itself remains ambiguous. However, it is quite likely that the artist is alluding here to woman’s view of the meaning of existence in terms of the cult of vir­tuous womanhood that typified the thinking of one seg­ment of the cultural climate that lingered on well beyond the turn of the century. For a dreamlike quality of remoteness and isolation, a cool detachment, is sug­gested. And that quality is of course heightened by the interest in the classically inspired gowns in which the slim figures are clad as well as by the use of pale tonalities and soft, blurred forms throughout the com­position.

With slight variations, Dewing repeated this general composition many times during his career, using ex­terior as well as interior settings. And over and over again he used the same models, often dressed in the same gowns. Yet each of his works seems fresh and alive and each has the same evocative quality and the same compelling poetic refinement that we see here in Con­versation.

Thomas Wilmer Dewing was born in Boston in 1851. From 1876 to 1879 he studied in Paris but thereafter set­tled in New York City. In 1887 he became an associate of the National Academy and in 1888 was elected a full Academician. Dewing was a member of a group of noted impressionist artists known as The Ten American Painters who exhibited together in New York in 1895. During his lifetime, he failed to receive the popular ac­claim enjoyed by many of his contemporaries, though numerous major collectors and quite a few museums, both here and abroad, were perceptive enough to ac­quire his works. He died in New York in 1938 and today is recognized as one of the most original American masters of his period.