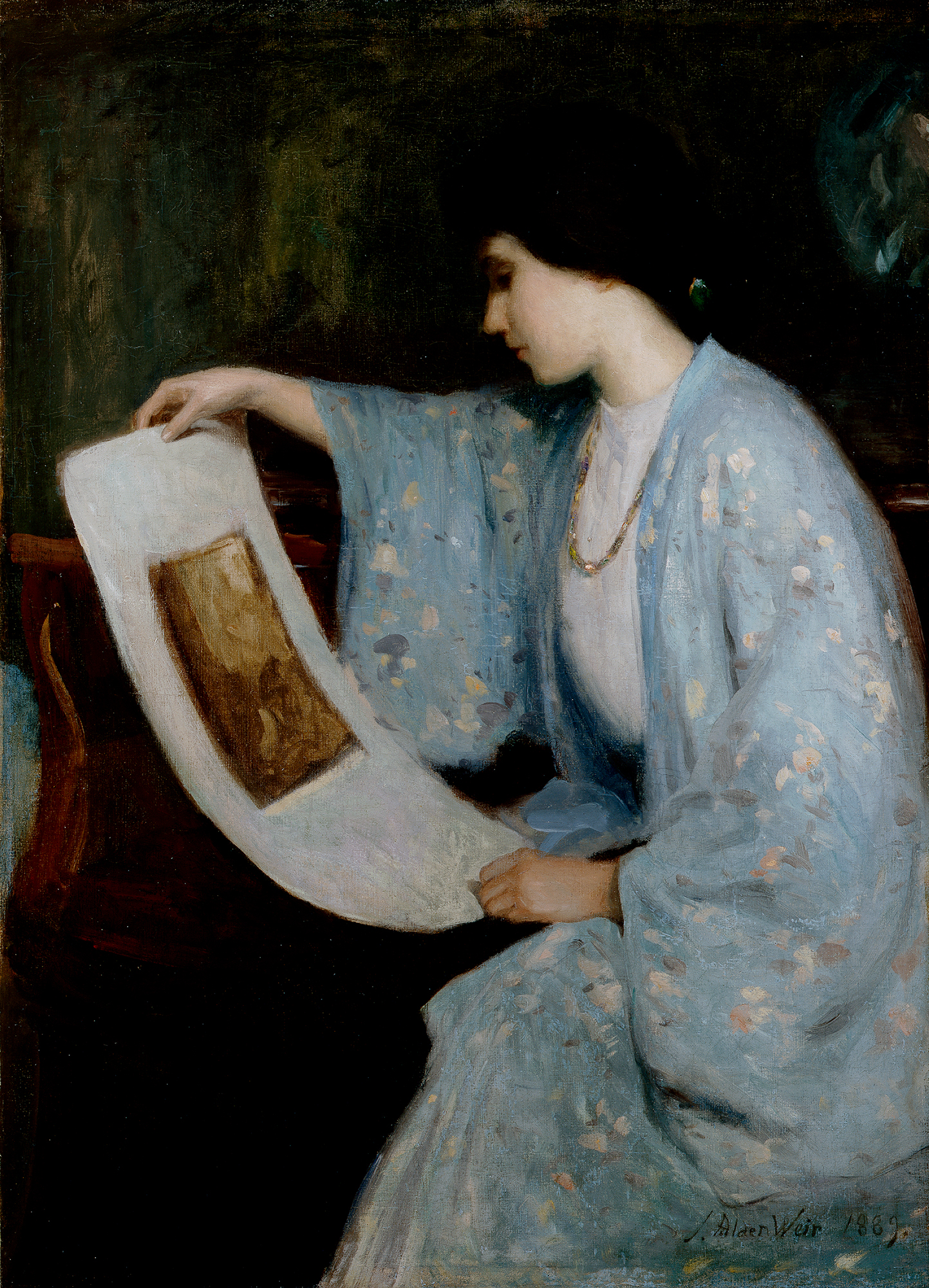 Gift of Friends of the Wichita Art Museum, Inc., and dedicated to Elizabeth S. Navas

Julian Alden Weir, one of the central figures of American Impressionism, was born at West Point, New York, the son of Robert Weir, a drawing teacher and professor at the U.S. Military Academy at West Point. The youngest of sixteen children, Weir received his first art training from his father. Showing early promise, Weir began attending winter classes at the National Academy of Design starting in 1870-71.1 In 1873, financed by a generous stipend from his godmother, Mrs. Bradford Alden, Weir traveled to Paris, where he studied under Jean Leon Gerome, the great French academic painter, at the Ecole des Beaux-Arts. Returning to New York in 1877 armed with the technical skills and confidence inspired by four years in Paris, Weir supported himself by painting portraits and teaching art classes at the Cooper Union Women’s Art School and the Art Students League.

Weir painted The Connoisseur in 1889 during a transitional period within his stylistic develop­ment when he began to apply the lessons of the Impressionists to his own work.2 During this peri­od, his paint application loosened up, his lines softened, and his palette lightened. In The Connoisseur, Weir’s debt to the Impressionists is especially evident in the light blue robe, wherein the loosely applied brushstrokes suggest a remark­able degree of translucency and delicacy. The woman’s face and hands, by comparison, are more firmly modeled and show Weir’s reluctance to abandon altogether the tenets of his academic training.

During the late 1880s Weir painted several variations on the theme of the contemplative woman, of which The Connoisseur isone fine example. Within the conspicuous display of beauti­ful objects, including the print, vase, and lavish robe, the woman appears as just one more beauti­ful object in an arrangement of precious treasures. Weir was himself an eclectic collector and connois­seur. He often advised major American collectors such as Erwin Davis and, when abroad, even occa­sionally made purchases on their behalf.3 Weir also began avidly collecting Japanese prints in the 1890s, the same decade in which the popularity of Japanese art and culture reached its zenith in America. Although The Connoisseur was painted several years before Weir began experimenting with Eastern stylistic conventions such as asymmetrical compositions and flattened space, the kimono-like robe is one of the earliest signs of his budding interest in Japanese art and culture.