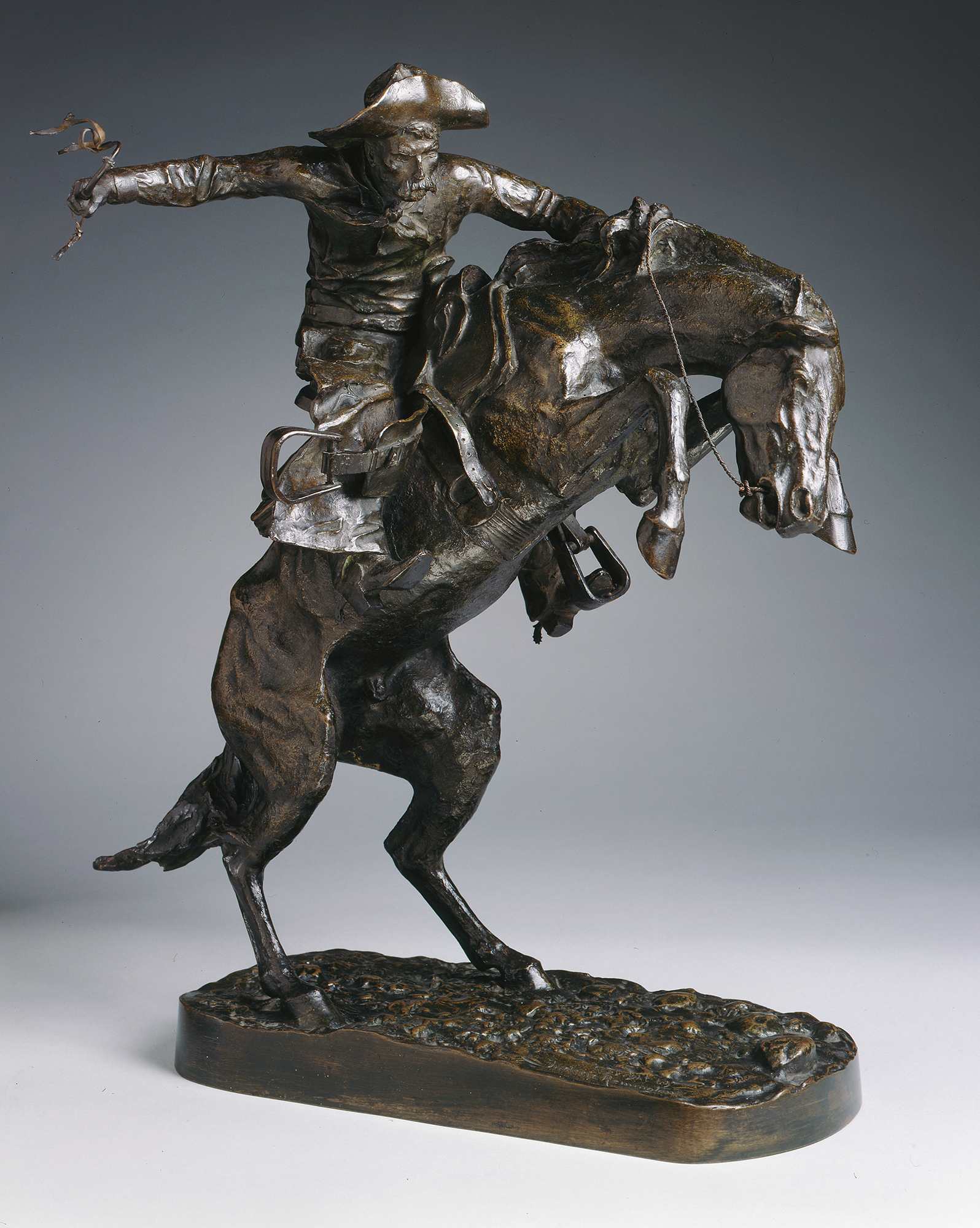 Both in literature and in art, themes of the Wild West became increasingly popular at the close of the 19th cen­tury. By then life on the frontier was being radically transformed by the spread of industry across the conti­nent. Fortunately, many of the nation’s most talented artists had traveled to the West and in time became ab­sorbed in documenting that way of life, which they recognized was rapidly fading away. Certainly, one of the most competent, both as a sculptor and as a painter and draftsman, was Frederic S. Remington. The Bronco Buster, executed and copyrighted in 1895, was his first and indeed his most popular sculpture. Here, as in most of his works, Remington’s conscious aim was to capture the authentic flavor of the Old West as he knew it.

Remington conceived this work as a 3-dimensional composition to be viewed from all directions, and his control over the material in which he worked is unques­tionably one of his masterful achievements. The subject is treated in lucidly realistic terms with untiring atten­tion given to the development of every detail, including the chaps, the stirrups, the crop, the spurs and the tooled leather saddle. But, in spite of the interest in detail, unity is not sacrificed, and a quality of explosive power comes through clearly. Indeed, the exuberant forms of both the cowboy and the rearing horse are so skillfully articulated as to convey the impression of feverish energy, and the intent and earnest expression on the cowboy’s face con­vincingly suggests unyielding determination.

Especially noteworthy is the dynamic equilibrium so dramatically achieved. For the composition is a complex system of thrusts and counter thrusts which link the forms of the cowboy and the horse and at the same time produce the net effect of precarious balance. In par­ticular, the horse, sensitively poised on its hind legs, im­parts a tenseness which reflects the precarious aspect of the action itself and calls to mind the turbulent age which is both literally and symbolically portrayed in this subject. With Bronco Buster, Remington invites the viewer to participate vicariously, if only momentarily, in the excitement of life in the Wild West.

Frederic Remington was born in 1861 in Canton, New York. For a little more than a year, he at­tended the Yale Art School but, like C.M. Russell—that giant of the art of the Old West—he was otherwise a self-taught artist. He made his first trip to the West when he visited Montana in 1881. During the 188O’s he traveled extensively throughout the West working on ranches and in mining towns where he gained first-hand knowledge of frontier life. In the course of his brief career, he received many commissions to paint and sketch western subjects which were published as illustra­tions in such popular magazines as Harper’s Weekly, Colliers, and Outing. He exhibited frequently, won numerous awards, published many articles and several books and, in 1891, was elected an associate member of the National Academy of Design. Remington estab­lished residence in upstate New York in 1891 but, in 1909, he moved to Richfield, Connecticut, where he died six months later at the age of 48.