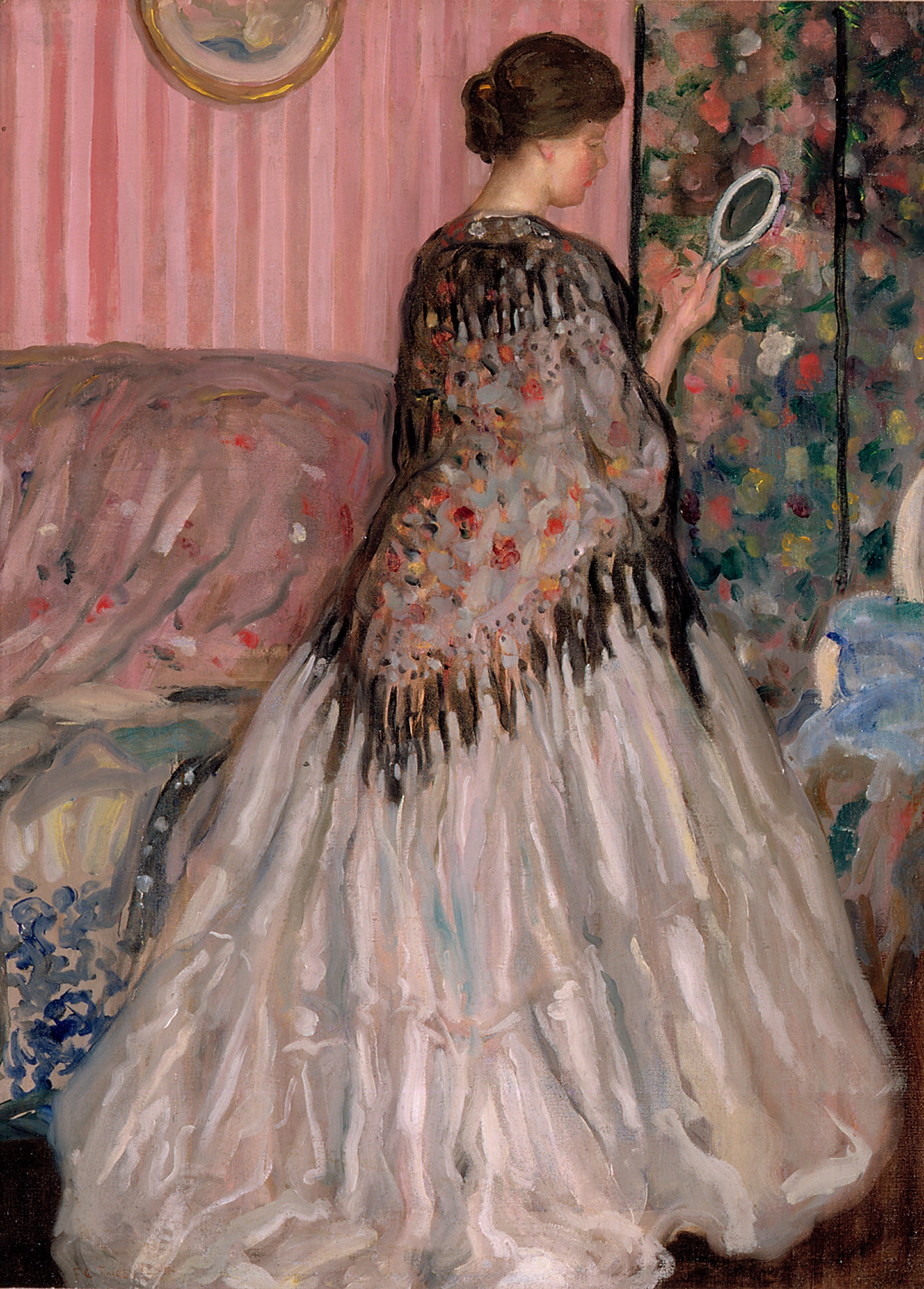 The Black Shawl is a striking example of the finest work painted by the American impressionist Frederick C. Frieseke. Frieseke was born in Owosso, Michigan and studied briefly at the Art Institute of Chicago and at the Art Students League in New York City. In 1898 he sailed to France and enrolled in the Academie Julien in Paris. Except for a few brief trips to the States, he retained permanent residence in France for the remainder of his life. Soon after settling in France, Frieseke adopted the impressionist manner. He became closely acquainted with Monet and other French Impressionists and purchased the house in Giverny that was originally occupied by Theodore Robinson.

Almost without exception, the subject of Frieseke’s paintings was the female figure. In this particular work the setting is an interior view portraying a young woman dominantly placed in the center of the compositional format. She is seen in a three-quarter rear view and wears a black fringed shawl over her shoulders and a long flowing satin gown with deep irregularly shaped folds that flare widely at the base. Background space is flat and consists of striped wallpaper and, at the far right, a two-dimensional oriental folding screen decorated with a surface pattern of dappled colors. Moreover, the amorphous quality of color masses that loosely flow across the surface of the fabric covering what seems to be a small sofa at the left confirms the decorative flatness of the composition. Here Frieseke has presented his statement more in post-impressionist terms than as purely traditional impressionism. What is so interesting of course is that the figure of the young woman, though handsomely modeled and appearing to be standing in a three-dimensional space as she views herself in the little hand mirror that she holds, is at the same time tightly linked with the flat space of the background. For the folds of her gown tend to repeat the patterns of the sofa cover, and the dappled coloration pattern of her black shawl echoes that of the screen at the right. As a result, the compositional dynamic is one of spatial ambiguity and emphasizes the theoretical dic­tate of the late 19th and 20th centuries that the foremost reality of a painting is the flatness of the picture plane.

Frieseke was a second-generation American Impressionist and it is understandable that much of his work discloses an interest in strong design and flattened composition that were typical of the post-impressionist movements of the early 20th century. Indeed, in every sense he was considered one of the most talented and highly respected American artists living abroad during the period. Frieseke died in Normandy in 1939 at the age of 65 years.