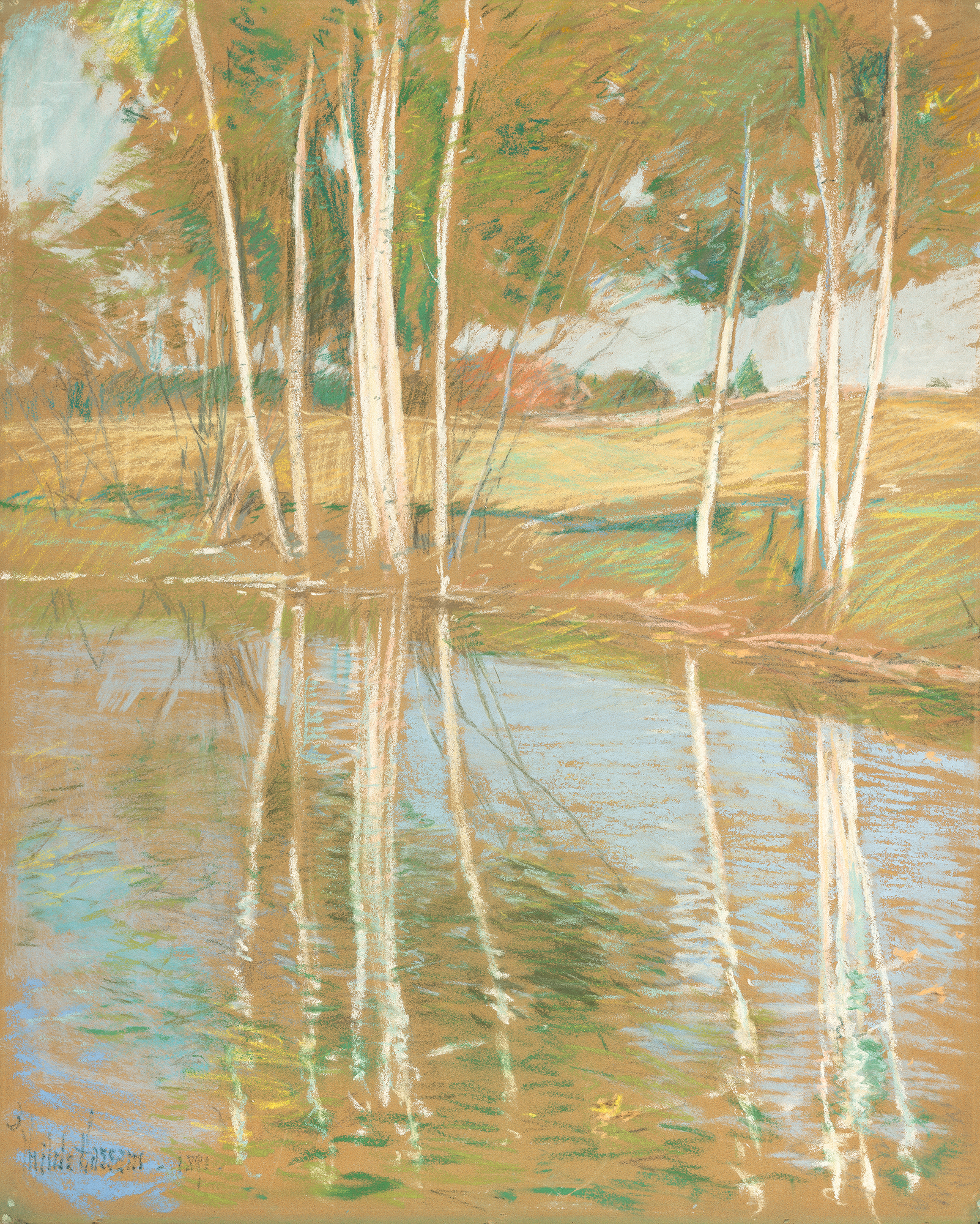 Frederick Childe Hassam, born in Dorchester, Massachusetts, was one of the most famous and successful proponents of American Impressionism. After modest local success as an illustrator and exhibiting watercolorist, Hassam moved to Paris in 1886 to study at the Academie Julian. The rigorous academic discipline served him well, and his facility in painting developed rapidly. It was, however, Hassam’s encounter with French Impressionism that most radically shaped his work during his three years in Paris; the Impressionists’ interest in light and color reinforced similar qualities of Hassam s early work, and he quickly assimilated their techniques. But, remain­ing true to his intense academic training in life-drawing and his experience as a professional illus­trator, Hassam did not go as far as his French con­temporaries did in abandoning firm drawing nor in dissolving solid form into patches of pure color.

Returning to the United States in 1889, hav­ing captured the bronze medal from that years Paris Exposition, Hassam settled in New York, where his work met with critical and popular acclaim. Late Victorian culture was at its height on the Eastern seaboard. The splendor of New York’s genteel urban streets, as well as the fresh landscapes of New England and the glittering Atlantic seacoast, provided Hassam with attractive subjects to capture with his new-found, exciting brand of Impressionism.

Despite the popularity of Hassam’s work among both collectors and exhibition juries, many leading academic painters were still hostile toward the more experimental American Impressionists. Hassam’s steadfast support of his fellow American Impressionists led him to resign from the Society of American Artists in 1897, when that body rejected a landscape by John Twachtman. In protest of the increasingly conservative officials, juries, and exhibitions of the Society, Hassam, along with Twachtman and Julian Alden Weir, formed an independent organization of  Impressionist and Tonalist painters that became known as “The Ten,” after the groups first 1898 exhibition, the Show of Ten American Painters. Hassam was by far the closest adherent of The Ten to the French Impressionist Style, whose limits he explored continuously throughout his career, until his death in 1935.

Hassam’s pastel drawing, The Birches, of 1891, comes from the decade generally acknowledged as the artist s greatest period of innovation. Fresh from Paris, Hassam undertook his American work in the 1890s with a masterful knowledge of Impressionist principles, animated by the excite­ment with which he approached his subjects armed with these new techniques. In The Birches, Hassam seems to have devoured this peaceful landscape with a sense of awe, in quick, yet assured strokes of pastel pigment laid down to capture the bright, shifting effects of sunlight on the trees and their reflections in the glittering blue water. Typical of Hassam’s work of the 1890s, the pastel displays a strong realist commitment to solid representation of forms, as in the water-side trees and grassy land­scape. However, the overall blond palette and the expert, short-stroked mixing of pastel pigments— used to render the bushy trees’ leaves and to com­municate the magical swirling of color and light in the water—originate in the artist’s knowledge of French Impressionist technique. In The Birches, one finds the delight with which Hassam applied the still-fresh tenets of Impressionism to his early work.