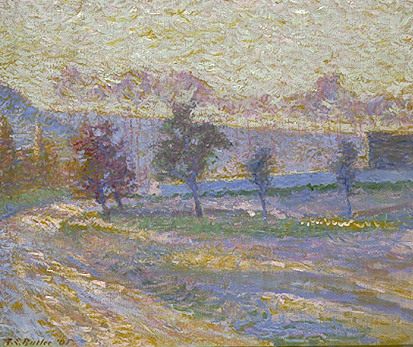 Theodore Butler was a member of the first generation of American artists to participate in the art colony in Giverny, France and to experiment in the Impressionist style. Unlike his fellow countrymen, however, Butler remained to make Giverny his home. In 1892 he married Suzanne Hoschede-Monet, a stepdaughter of Claude Monet. Following Suzanne’s early death in 1899, Butler developed a close relationship with her sister Martha and married her in 1900.

Working outdoors with a collapsible easel in order to record nuances of season and atmospheric conditions, Butler readily adopted the plein air impressionist technique of his famous father-in-law. As his own style matured, he began to respond to and incorporate aspects of post-impressionism into his imagery.

Butler’s biographer Richard Love identified Apple Trees, Giverny as indicative of the artist’s interest in evoking “a spirit of place,” that is, a subjective response to the poetry of a familiar, local landscape.